It’s mid-May, and a crowd of protesters have gathered in front of the State House. “We’re local residents earning our living,” explains Dale Appel, a member of SAG-AFTRA (Screen Actors Guild–American Federation of Television and Radio Artists). At stake is Massachusetts’s film tax credit, currently under review on Beacon Hill. The union’s 1000-some New England members would be among the hardest hit if the credit is cut.

“The turnout at the State House would have been bigger, but everyone was working!” says Tiffany Kinder, the production manager at Red Sky Studios in Allston. “We do a lot of commercials, ads, still shots, you name it.” She says her clients include Harvard University and a number of local products and companies, and she works with a wide range of film-industry professionals. “Since 2007 , business has boomed. People don’t have to go to New York or Los Angeles anymore.” Losing the tax credit would be detrimental to Red Sky. “If the tax credit goes away, we have no business, we’d lose our homes, and we have to go back to Los Angeles.”

Back in 2006, Massachusetts followed other states’ lead and introduced the credit. This 25% tax credit makes it less expensive for film companies to do business in the state, and the idea is that it will create jobs.

This year, the film tax credit has come under fire. Governor Charlie Baker proposed cutting the $80-million-per-year credit to offset a proposed increase in the earned income tax credit. Proponents say the film credit brings jobs to Massachusetts, while critics say the costs of the credit far outweigh the benefits.

For individuals in the industry, the film tax credit has made a huge difference. But has it been beneficial for the state as a whole?  Are the jobs created by the incentive worth keeping all low-income folks in the Commonwealth from getting a bigger tax credit?

Berger says no. Citing a study by the state’s Department of Revenue, he says, “This is one of our most generous special tax rates, and one of the least beneficial. From 2006 to 2012, we spent $412 million to generate $65 million in revenue. The evidence is that this is a very inefficient way to strengthen our state’s economy.”

“If a big corporation was closing in Massachusetts, people would be up in arms,” says Lynne Riley, another SAG-AFTRA member at the picket. “But this is a whole industry.” While Berger admits that the credit has created a lot of jobs in the film industry, he argues, “If we subsidized any industry at that level, the effect would be the same.” 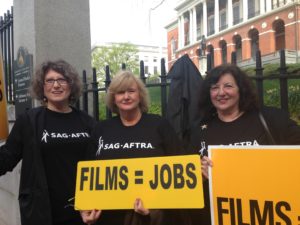 Back at the picket, Appel points out that it’s not just actors who will be affected if the credit goes away, but everyone involved in the process, from the truck drivers moving equipment to the restaurants where film crews get lunch. But the Department of Revenue has taken that into account in making its recommendation to cut the credit. “The Department of Revenue uses economic modeling to account for the number of ancillary jobs created by the credit,” says Berger.

The credit did what it was supposed to do. It has created jobs, but the jobs are very costly. The state spends $1 million per year to sustain each individual job created by the tax credit, while those jobs have a median pay of $70,000 per year. “That’s a very high price, and a low net benefit,” says Noah.

But for film industry workers like SAG-AFTRA member Elaine Victoria Grey, there is no debate of costs and net benefits: “We need our jobs.”

Liked it? Take a second to support Josie Grove on Patreon!