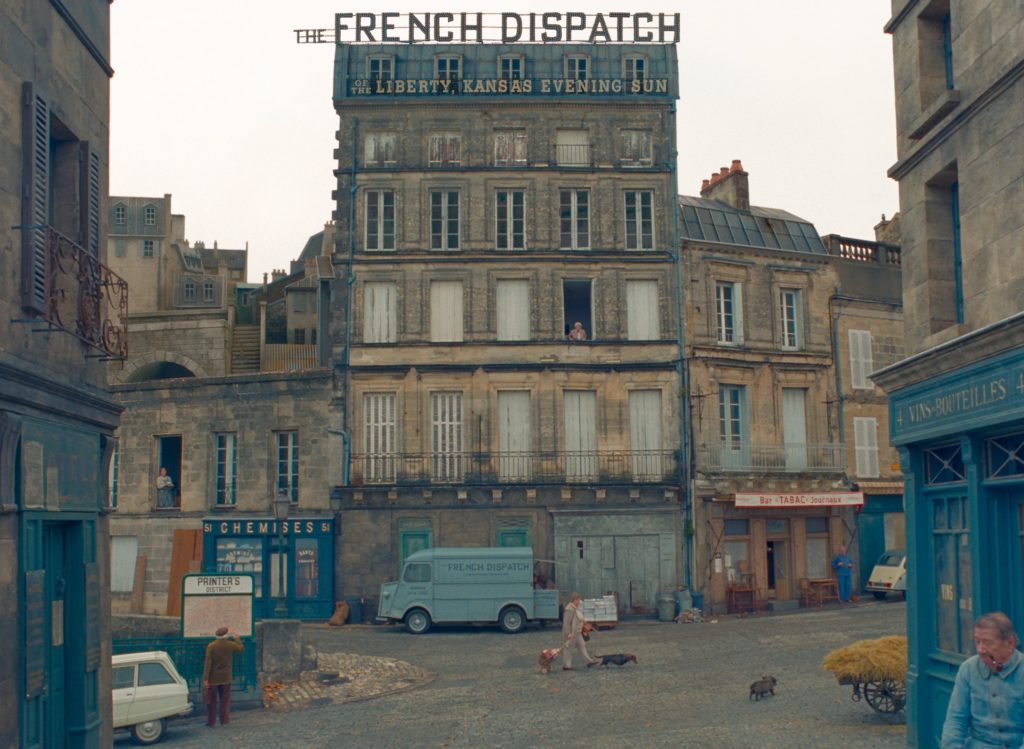 Surprisingly, Wes Anderson’s newest movie, The French Dispatch, reminded me most of The Royal Tenenbaums. The plot of The French Dispatch, which is really more of a throughline connecting the movie’s vignettes, revolves around the death of the titular magazine’s editor, and thus, at his request, the death of the publication. Bill Murray—playing The French Dispatch‘s founder and editor, Arthur Howitzer Jr.—takes on the the role of the father figure previously occupied by Gene Hackman, who portrayed the Tenenbaums’ ignoble patriarch. However, in what feels like a departure, this figure appears to be a stand-in for Wes Anderson himself. No longer imbued into the plucky and confused next generation, Anderson seems inserted now as an aging craftsman, committed to preserving a specific way of doing things amidst a rapidly changing landscape.

This is, after all, what The French Dispatch is ostensibly about. It is a love letter to journalism– to The New Yorker, specifically– but it’s also a testament to doing something a certain way, however idiosyncratic, and how these ways of doing things can result in a distinct and distinctly creative work. In other words, more than any other Wes Anderson movie, The French Dispatch is sort of like a Michael Mann movie by way of a DePatie–Freleng cartoon.

It’s hard not to see that the proof is in the pudding, so to speak, with The French Dispatch. The movie is cleverly structured in the style of the magazine’s sections, simultaneously crafting an image of the fictional French town in which the movie is set while also serving as a revue for Anderson’s recurring tropes, motifs, and stylistic filmmaking. Whether through his recognizable palette, thoughtful practical sets and effects, or trademark scene composition, the movie is an incredible platform for displaying the auteur’s distinct visual flair and impeccable—and impeccably detailed—craftsmanship.

Where it may falter most is in the more transparent reaches for pathos, which punctuate the overall air inconsistently enough as to be occasionally distracting. It’s not so much that there aren’t genuinely emotional moments in The French Dispatch, particularly thanks to the brilliance of the actors and the very clear relationship they have to the director. It’s more that many of them feel abrupt or forced when they do arrive, like a box to be checked as opposed to a beat to be earned. There’s a triteness to them, that Anderson is normally so adept at avoiding in his other movies. It probably has more to do with the fleeting, disconnected nature of vignettes, but there is an argument that this was intentional, given the movie’s focus on form and the visual.

Regardless, The French Dispatch is a delightful movie featuring a cavalcade of stars and a director firing on all cylinders. In some ways, it is a bit like a victory lap, and the victory lap itself, the movie itself, all but proves how much Wes Anderson has earned it. And, despite the more clunky moments of sadness, there is something evocative to what the movie has to say about artists and craftsmen and how directly tied process is to the quality of a final version, in any field. Working in a filmmaking industry that’s rapidly becoming more tightly produced and cookie-cutter can’t help but make someone like Anderson a bit nostalgic and frustrated. Stalwart supporters of idiosyncratic art are found in fewer places, which means that the environment for filmmakers becomes less encouraging for new auteurs like Anderson to grow and succeed.

The French Dispatch doesn’t so much offer answers to the overall problems in industries like filmmaking and journalism that are so painfully clear, so much as it demonstrates in full force what can happen when a group of people with individual and specific skill sets come together. At the movie’s end, with their founding father lying dead at his desk—forever the editor—the French Dispatch employees ask themselves, “What happens next?” Following a pregnant moment of silence, there is no answer. The group simply continue with the project at hand.