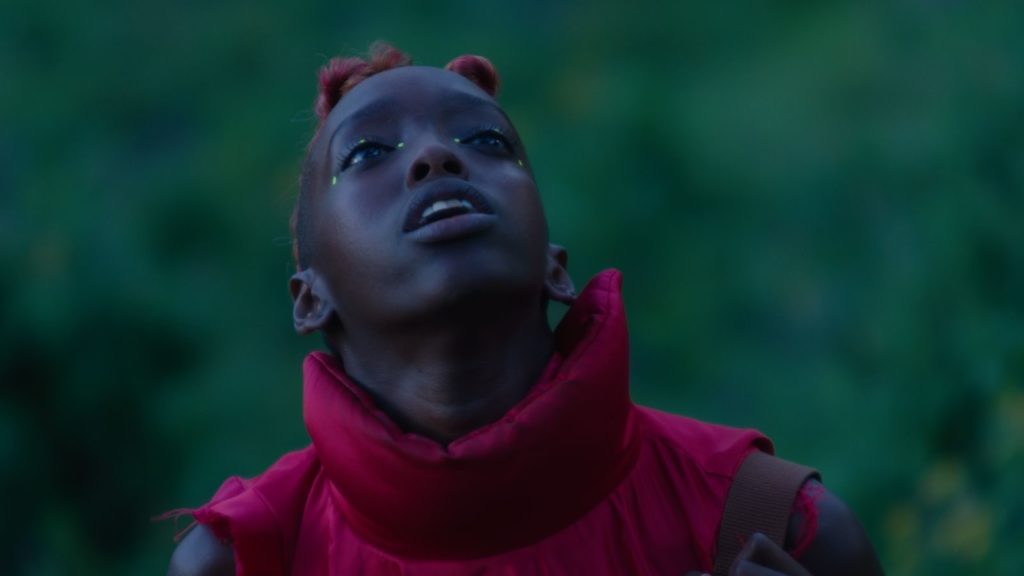 The world of Neptune Frost is built out of music. Its script is poetry, in essence, told in stanzas and rhymes that reveal character and story to the audience. The filmmaking itself is likewise categorically musical, written by poet and musician Saul Williams and co-directed by Williams and Anisia Uzeyman (the pair is also married). It is an Afrofuturist tale set in Burundi, in which the romance between a coltan miner, Matalusa, and an intersex runaway, the titular Neptune, leads to revolution against the oppressive authority designed to crush them. Throughout, the movie is actively anti-colonialist and anti-capitalist, an excoriation of the exploitative labor conditions that the intersection of these two forces creates.


The movie has an overall punk energy, made up of a sort of stumbling charm and cocky directness that contributes to the overall urgency felt on screen. Quite simply, there’s something disarmingly forthright about characters flipping the camera off and chanting “Fuck Mr. Google.” There’s no mistaking that Neptune Frost is directly confronting a specific political history and engaging with the audience itself.

Bringing a distinctly exploratory eye to their filmmaking, Williams and Uzeyman playfully use color, light, and shadow in a way that makes every image feel like a discovery. The diegetic sound and the music have a fascinating interplay that highlights the discordance between the expressionism that filmmaking innately brings to the realities of an image, a recording of the real. Rather brilliantly, the filmmakers use this liminal space somewhere between abstract expressionism and traditional storytelling—that sweet spot that the best movie musicals occupy—to reflect the feeling of dissociation that the characters themselves contend with, a dissociation directly or indirectly caused by omnipresent technology oppressing and exploiting the masses. The movie is told in a succession of scenes that alternate on the spectrum from dreamlike abstraction to straightforward storytelling. The movie is engrossed with dualities like this throughout, dualities which occupy and shape the central characters’ states of being—abstract and real, past and present, dream and reality, physical and virtual, colonized and free, male and female, miner and mined.

It is this final duality that the movie seems preoccupied with overall, positioning Black people as both the miners and the mined, causing dissociation not just within oneself but also disconnection from a community and the world. Colonialism and capitalism position Black people as both the laboring class and a global resource—not simply bodies to be exploited, but also creativity and ideals to be stolen. Revolution then is not only the reclamation of tools and technology, but also the reformation of community and the reclamation of ideals.

The movie perhaps brings its many thematic threads together in inelegant ways but it does so through filmmaking that is urgent, prescient, and radical. It is a fantastic and thoughtful debut picture from Saul Williams and Anisia Uzeyman, and one that only inspires excitement for what they do next.