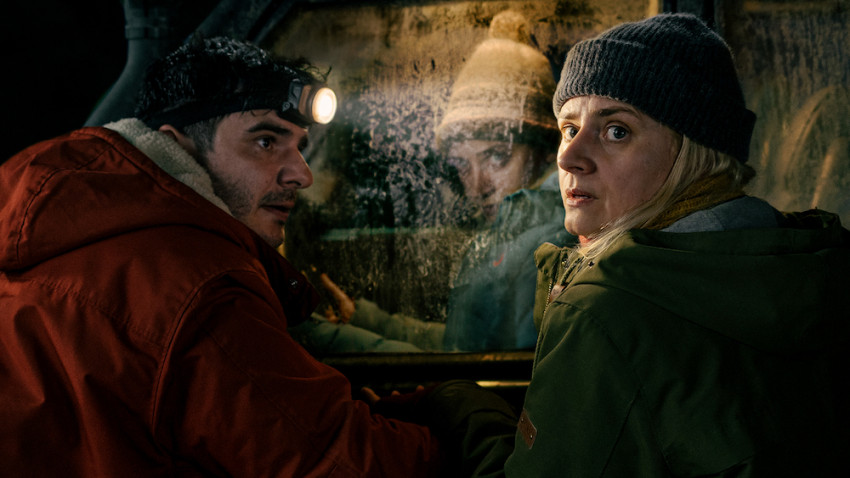 Întregalde follows a group of humanitarian aid workers in Romania, whose trip to the village of Întregalde is derailed when they pick up a disoriented old man (Luca Sabin) in need of a ride to a locale off the main road. As one calamity after another befalls the group, leaving them stranded in the woods, their seemingly simple act of generosity becomes a burden in real-time. The group becomes divided by the situation, negotiating what choices to make next in the name of sheer survival in the dark, bitter cold and what to do with a senile old man unintentionally making it all the more difficult.

Although a seemingly simple parable or allegory, director Radu Muntean eschews any preachiness or moralism in favor of a more darkly ominous mood. The end result is something undeniably palpable, visceral even, and all the more effective because of it. At first, Întregalde feels more akin to Texas Chainsaw Massacre or The Blair Witch Project than to a philosophical case study on the limits of charity. Within this moral story is the tense beating heart of horror, and Muntean uses this tension to build in a way that leaves the viewer not quite confused, but unsure of what might happen next, and how they might be affected. This is, though, the essence of a moral quandary, is it not? A feeling of uncertainty in the face of raw human dilemma, and the decisions and mental calisthenics that go into making a firm decision in precarious situations.

To maintain such uncertainty, Întregalde is full of stark lighting and dense blocking, cluttered scenes even, with background noise and voices underneath the primary dialogue. It’s near chaotic at times, as if the very image itself is meant to provide confusion or distraction to the questions at hand, questions of morality and survival. Whether in a busy marketplace or two beams of light in the dark woods, these characters are negotiating with each and with themselves about the rightness or wrongness of certain decisions. And the movie’s structure urges, if not compels, the viewer to look inward and ask themselves what they might do in such a situation.

The whole cast is wonderful at maintaining this tension, imbuing a loose naturalism so that everything feels real and urgent. Luca Sabin especially, as the old man at the center of the story, is exceptionally powerful. His performance is what makes the whole movie work, precisely because it feels so chaotically real. Likewise, the movie quite expertly peels away at the moral questions at hand, in which Sabin’s character are so frequently at the center yet in which he is rarely centered. That is, for so much of the movie, the old man is pulled and pushed, yelled at or criticized. However, in a devastating final act, the movie quietly refocuses onto Kente, leaving an ellipses in place of an answer on this question of charity.

Rightfully so, there are no easy answers in Întregalde, because it’s a movie that refuses to be anything but simple about its complex topic. It not only treats the weighty concepts it engages with as complexly as they truly are, but it also refuses to see the individual actors within its tightly bound story as anything less than human beings worthy of respect and care. In this way, the movie never talks down to the audience and is all the more affective because of it.