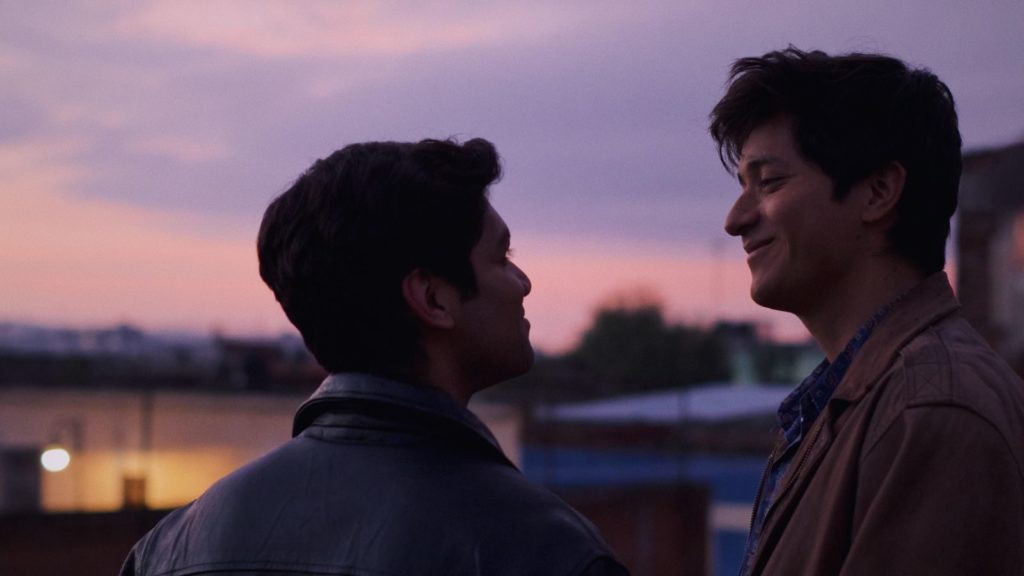 Within Heidi Ewing’s I Carry You With Me, there is the occasional depth and realism that she so successfully, and memorably, translates into her documentaries (like Jesus Camp or One of Us). Her camera is normally able to capture stories rarely told, without ever losing a firm grip on her subject’s humanity and reality. She can present worlds so unlike most viewers’ own, while never making it feel voyeuristic, exploitative, or sentimental. Her skill as a documentarian is what makes it so unfortunate that, for her first outing into narrative, her film instincts seem to go haywire. What’s more, she chooses to clunkily insert documentary into an already disruptive narrative, which only highlights her success in the former and lack of skill in the latter. The result is a haphazard attempt at docufiction, that only briefly succeeds in the “docu” portion.

I Carry You With Me starts as a narrative about two men who fall in love in Mexico and then who separately make the arduous journey across the border into America, and eventually into New York City. These opening acts attempt to tell not just one story though, but several: that of each of the men, Iván and Gerardo, their childhood in a homophobic culture, and glimpses into Iván’s present day. Iván’s narration punctuates the movie as he talks about his yearning for the son he left behind in Mexico, his ambivalence towards remaining in the country where he’s lived for decades, and the struggles of navigating the NYC restaurant scene.

It is in these narrative sections that the movie fails, more often than not. Writer-director Ewing and co-screenwriter Alan Page Arriaga make an attempt to cross-weave moments of the past with each other. So, scenes of Iván and Gerardo’s meeting and early relationship are cross-cut with flashbacks to their individual childhoods. It’s an admirable attempt to paint a deeper picture of these two men as individuals, but it proves to be confusingly put together and edited in practice, approaching something near incomprehensible in its totality. The transitions from far past to recent past to present are rarely thoughtfully done, and end up halting the movie, both as a narrative and emotionally.

The disruptive storytelling ends up creating a sense of detachment between narrative and documentary within the movie, but also between movie and viewer. Any emotional resonance or connection that might be had is deflated before it can take root. This disruption bleeds and is reflected into other aspects of the movie. The actors portraying real-life Iván and Gerardo don’t even feel like the same people, so flat do their younger selves come off in the narrative sections. Likewise, Juan Pablo Ramírez’s cinematography might be breathtaking, but it’s almost too cinematically brilliant for the grounded story that Ewing seems to want to present. There is an overall disconnect between the intimacy and realism that the movie strives for and the cinematic storytelling that the narrative ultimately loses itself to.

I Carry You With Me is then less a story about Iván and Gerardo and more of a broadly told, unspecific movie that attempts to simultaneously be about a homophobic culture in Mexico, the brutal journey over the border, and being an undocumented immigrant in an unsympathetic United States. By attempting to tell each of these significant threads all at once, the movie proves ineffectual at telling any of them, and any message collapses in on itself. Most importantly, the narrative loses the central relationship and humanity of Iván and Gerardo themselves.

It’s a welcome relief when I Carry You With Me pivots into documentary and Ewing is confidently back in her element. The “twist” reveal is presented as a montage of home movies and footage of Iván and Gerardo’s life in NYC seemingly since after what is presented by narrative. This montage is near-revelatory, just as much as it highlights the flawed and weak narrative that came before it. The documentary finale tells more of a story about these two men and their life together than anything put forth in the narrative sections of the rest of the movie. And just as quickly as it feels like the movie has finally “begun,” the movie chooses one last disruption and concludes abruptly. It’s a vague, open-ended conclusion that only adds to the overall underdeveloped quality of I Carry You With Me.

Ewing’s love letter to her friends Iván and Gerardo only truly shines when the story becomes a documentary that can tenderly focus on—and present—the actual couple, as opposed to their hunky and younger actor counterparts. I wish that the movie allowed us to know and to connect with Iván and Gerardo more deeply and to hear them tell their stories, instead of the reenactments that rob so much of their lives of its individual brilliance. I Carry You With Me only briefly allows us to truly see Iván and Gerardo, and it’s a decision that flattens the movie into something full of visual and, perhaps, cinematic grandeur but little humanity.

Tags: heidi ewing, I Carry You With Me, NYFF, NYFF58