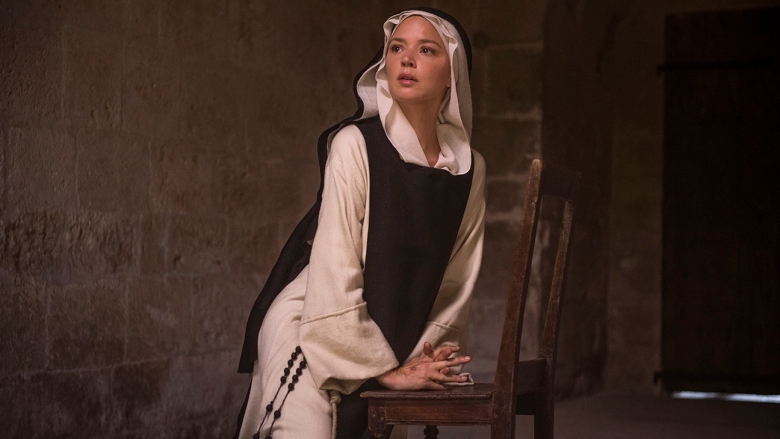 Listen. When I heard Paul Verhoeven was making a 17th century lesbian nun movie, I knew I would love it. I was patient, even with pandemic-induced delays. When I finally sat down to watch it at the New York Film Festival, it was worth the wait. Completely over the top in the best ways, Benedetta feels like a spiritual (haha) successor to Showgirls and Elle at the same time. I don’t know what else you could want from a “true story” about a sapphic nun who begins speaking for Jesus and slowly rises through the ranks of her convent while a plague threatens to wipe out their small Italian village. Like much of Verhoeven’s work, you are either in or out. Hopefully people will be smart enough to dive right in.

Since she was a small child, Benedetta (Virginie Efira) has placed her trust in the Virgin Mary. Having been sent to a convent at a young age, Benedetta has matured into a devoted nun as her father had hoped. After the convent takes in a young peasant woman named Bartolomea (Daphne Patakia), Benedetta starts having strange dreams and visions of Jesus himself. Many of the sisters believe Benedetta a prophet, a saint, but the Abbess (Charlotte Rampling) has her doubts. There’s also the matter of the secret love affair blooming between Benedetta and Bartolomea, as their power and influence within the convent seems only to grow.

Each actor brings a different kind of intensity to their roles. Rampling could play this character in her sleep, but even she has a few moments where she is forced out of her cold disapproval. Efira is tasked with flipping between the quiet piety of Benedetta and her gruff, bellowing proclamations of blasphemy and salvation. There’s plenty of blood, bulbous sores, and other bodily fluids to go around. Paul Verhoeven would never shy away from a medieval toilet situation.

I wouldn’t call Benedetta unpredictable, as this is ostensibly a story that happened in the real world, but the film does have enough twists and turns to keep you from ever being bored. Are Benedetta’s visions real? Has she become the sacred mouthpiece of Jesus Christ himself? Are her convictions enough to keep the plague out of Pescia? Can you safely have sex using a whittled down wooden statue of the Virgin Mary? Even with its runtime of 131 minutes, Benedetta speeds along, daring you to keep up. Praise Jesus!