“It was a congealing of energies.” Turning over a golden plastic skull in his hands, Andrew Spaulding, drummer for Brooklyn supercrew Pill, describes the origins of the band surrounded by the dregs and shreds of Halloween in the upstairs saloon of Somerville’s ONCE Lounge. Red string lights mingle with the soft glow from a Sopranos pinball machine, torn garlands of skeleton cutouts yet to be swept away dangle from edges of two pool tables, and the band, who’ve just washed back ashore in the US from a European tour with perennial punk rabble-rousers Parquet Courts, winds down at a pair of high tables, smiling easy and quick to laughter as we retread the paths that brought the four of them together. Memories blend together, filling in gaps and sparking off debates. Onstage, the quartet is absolutely ferocious: a high velocity whirl of hypno-robotic basslines, glassy drips of guitar, and urgent howls kicked into an electrifying stew of amplified saxophone and boiling over with animated percussion. To say their performances are merciless would be an understatement. Nearly every second of the show features the entire band lurching into the backbeat, throwing the full weight of their inventiveness into an uncompromisingly fearsome whole. Throw on their latest record, Convenience, and have some life breathed back into you.

“I don’t even think I’ve heard this story,” says Veronica Torres, lead vocalist, as Andrew explains his first encounter with Ben Jaffe, saxophone, one chance evening at the record store he used to work at: “I was working weekends and just getting into free jazz at the time, and he was playing free jazz sets after hours. A friend of mine told me that I needed to meet him, that we’d get along great, so I stuck around to check it out.” His eyes go wide and his arms stretch out as he spins the rest of the story, recounting with amazement how “they just started going so far out, taking these amazing turns all over the place. We talked after and just redirected towards each other musically immediately.” Having seen Ben’s noise-soaked improvisations envelop the band only an hour before, it’s easy to see why. His body yanking backwards with every note, he stands with his shoulders squared and feet planted firmly on the floor; seeing the violent flurry of squeals and shrieks that he wrings from his instrument, you’d swear it’s to brace himself from being hurled off his feet.

Ben’s free improvisational style is a mysterious but absolutely key piece of the sonic puzzle that is Pill, and his decision to take up the instrument was sparked by similarly mysterious circumstances. “I wanted to play guitar in high school. I started out wanting to play Murphy’s Law, Minor Threat…basically skate punk music,” he explains, “But one year, before my birthday, I had this dream, and in the dream I could play the saxophone. When I woke up, my dad asked me what I wanted for my birthday and I asked him to rent me an alto sax.” Growing up in Boston, Ben was mostly inspired by what the “avant-garde kids” at the New England Conservatory were doing, and, finding out that saxophonist and micro-tonal wizard Joe Maneri would allow anyone to take his class if they demonstrated seriousness and commitment, began expanding his palette of sounds beyond those early skate jams. But the scene in the early 2000s left him wanting: “I liked the students, but I didn’t necessarily want to play out with them, because you’d only ever play in these small places, basically for each other. And with the indie crowd, if you liked the Stooges, the Melvins, or Black Sabbath, there wasn’t really anywhere to go for you.” He then took himself on the road for 7 years, playing in a soul band with Eli Reed. “But I always wanted to play something with a heavier, free improvisational leaning,” he says, his piercing gaze practically tearing through the walls, “You can get very good at playing music from a certain time period, but I always wanted to do something else.” Call it post-punk, call it no wave, call it noise, but Pill is certainly hunting for something else. 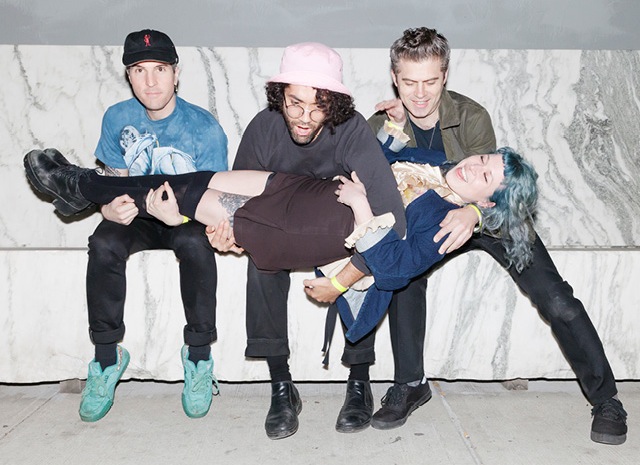 It’s easy to get lost in the frantic stream of consciousness wailing of Ben’s saxophone playing. It’s a breathless blur of notes, non-notes, and everything in between. If it feels endless, it’s because he wants it that way: “I’m interested in finding a way to be playing the entire time while still being part of the band. If I ever do get a solo, it feels really special, but I’m kind of always soloing,” he tells me, smirking. Some bands (and some audiences) would get swallowed whole by that kind ruthless musical approach. But not even a reinforced concrete wall of noise could contain the pure and terrifying energy that erupts from center stage.

Routinely switching from swooning, aching warnings (“There is no ally in this void/There is no ally in this void” on “Dead Boys”) to a rapidfire shriek of violent imagery (“We call this dance mass hysteria/Put your hands behind my neck/Press swiftly/To promote someone else’s revolution/under the guise of my appearance” from album opener “60 sec.”), Veronica’s lyrics as well as her delivery are masterful poetry in action. You know it, I know it, and the band feeds off of it. “Issues and meaning are so abstracted, but I feel like Veronica writes brain viruses that attack things that are wrong in your brain,” gushes Andrew, only reinforcing my suspicion that Pill are the most encouraging team of artists you could ever hope to meet. “It’s philosophy…there I go being an asshole again, but I think she has a very philosophical way of writing about things. It’s more nuanced than just shouting about it.”

Shouting or singing, Veronica is indeed on the attack at every moment in the songs, lunging at your mind with frightening agility. Consult a lyric sheet and you’d be under the impression that she’s on a crusade to obliterate any ideas of a boundary between the personal and the political. “Our word is truth among Women/Our word is truth among myself”, she cries on “Which is True?” as saxophone, guitar, and drums seem to ceaselessly pick up speed on the heels of her brilliantly anxious bassline. “There is no resolution/Only revolution/In the collected memories of our bodies,” she confides, her words cut off by a snare roll and the cinematic swirl of brass. Political is a distinction she wears proudly, but she ultimately places the responsibility on the listener to unearth that meaning for themselves: “Sometimes we can drop it on you, and other times it’s a little shielded within the layers of the music. If your ears are tuned into the right frequencies you hear it.”

While the process of crafting those lyrics falls on Veronica individually, she embraces the eagerness of her bandmates in tackling these issues with her. “We talk about lyrics a lot. I feel like everything that we’ve written has a somewhat political slant, but this one in particular…There were some songs where I felt like I was having problems that I had to work through,” she explains, “We had to sit, either at a bar or in the studio and talk it out, knowing that we can’t move forward until we figure out how we all feel about this.” The way Veronica frames it, it’s more about “asking questions within a larger community” than giving concrete answers. “Can it be drawn out? Yes, but it’s the best way to do it,” she says, quickly adding with a laugh that “We’re pretty good about not getting butthurt.”

Contrary to his personal feelings, guitarist Jon Campolo’s stage left explorations are anything but an “accessory” to the music; in the grand scheme of Pill’s sonic architecture, his overhand playing, pickups-to-amp skronking, and vibrant soundscapes rush in to the empty spaces left by his bandmates, holding up structures that could collapse under the phenomenal weight of noise or dynamiting them entirely with explosive effects. Without a doubt, Jon’s a mediator, focused more on balancing energies than steering the ship, and he’s quick to acknowledge the role of editing and revision in creating the beast that is Pill.

“We can argue anything and we will,” he says, taking pride in the at times brutally democratic process, “Bad ideas turn into good ideas at the very last second. It’s ugly till the very end.”  Veronica echoes that sentiment: “Initial ideas get transformed into these mutants and we play them out to the point where they become these beautiful, sexy beasts.” Perhaps the one area of Pill where Jon comes anywhere close to taking the reigns is their visuals, so much so that when I bring it up while Jon steps away to settle the band’s finances for the night, Veronica is quick to tell me to wait for him to get back (SO NICE, THESE FOLKS). And even on the issue of their instantly recognizable style, all cartoon squiggles and bold, bright objects, he’s quick to pin his role as “directorial.” “I’m the designer because it’s what I do and I’m down,” he humbly replies, interjecting that group consent is at the heart of anything they turn out, “I don’t commit to anything until everyone is down.” 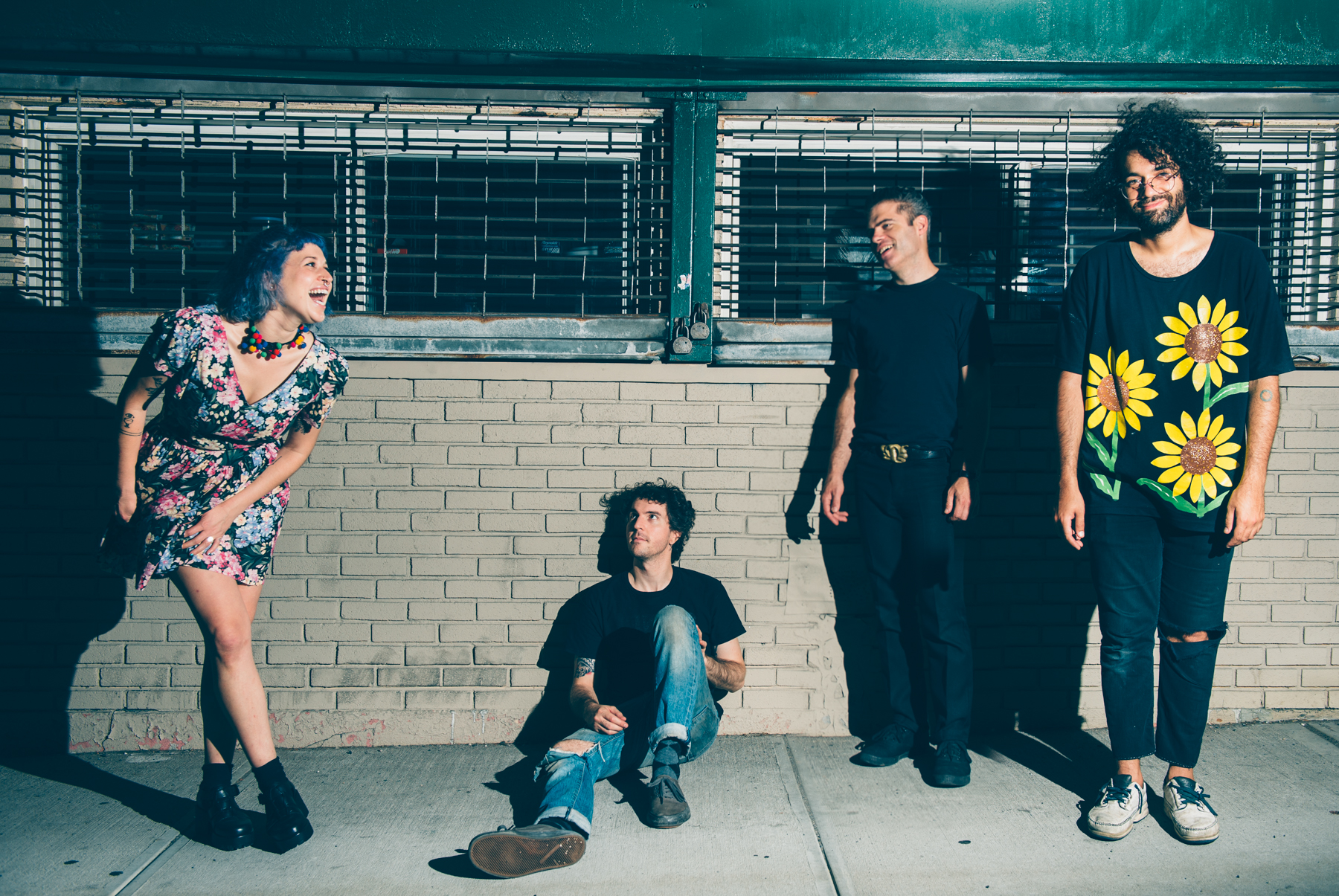 During their closing song, “Hotline”, Pill are joined onstage by a mysterious fifth member: a pair of plastic guitars wielded by Jon, both affectionately known as “Sheila”. “They’re Fisher-Price toys that Andrew and I circuit bent the boards on,” he explains, “and Sheila 2 is way more temperamental than Sheila 1.” Temperamental or not, the keyboard-like effect that rings out of every strum, in between the Troggs-like Ba-Ba-Ba vocals that Jon adds to the song, his voice filtered through some kind of robotic patch, is nothing short of arresting. It’s one final magic trick in a band brimming with them and keeps you on your toes to the last second. Fisher-Price gets it done.

Packing up their gear and slumping their way down the steps, Pill are done for the night and clearly exhausted. Their hectic tour schedule had them racing out of NYC only 24 hours after landing from London, just enough time for an abbreviated Halloween (“or wine and pizza at home,” quips Veronica), and they’re ready to crash for the night at Ben’s family place in Newton. But captive audience now firmly in their grasp, they’re ready to keep moving, with plans to record a new EP before the year is out as well as a comic book they created for Rough Trade with tour pals Parquet Courts. “It’s called Check, Please!,” Jon tells me, holding back laughter the entire time, “It’s a comic where Sean Yeaton wrote the story and we did the art. He texted me frantically in the middle of the night with the story and it’s completely absurd.” And true to collaborative form, the entire band is in on it. “Veronica’s art is in it. Ben did the lines. Andrew wrote the script.” It’s a compelling idea to believe that your favorite artists are these equal and democratic artistic units, pushing each other to new musical expressions with equal parts inspiration and encouragement, but Pill are well and truly the real deal, approaching some impossible Platonic ideal of a band. Bumbling my way across the Red and Orange lines, Veronica’s shouts of “The War is Over,” off of single and set highlight “Medicine” were still ringing between my ears all the way home. Why settle for less than impossible?