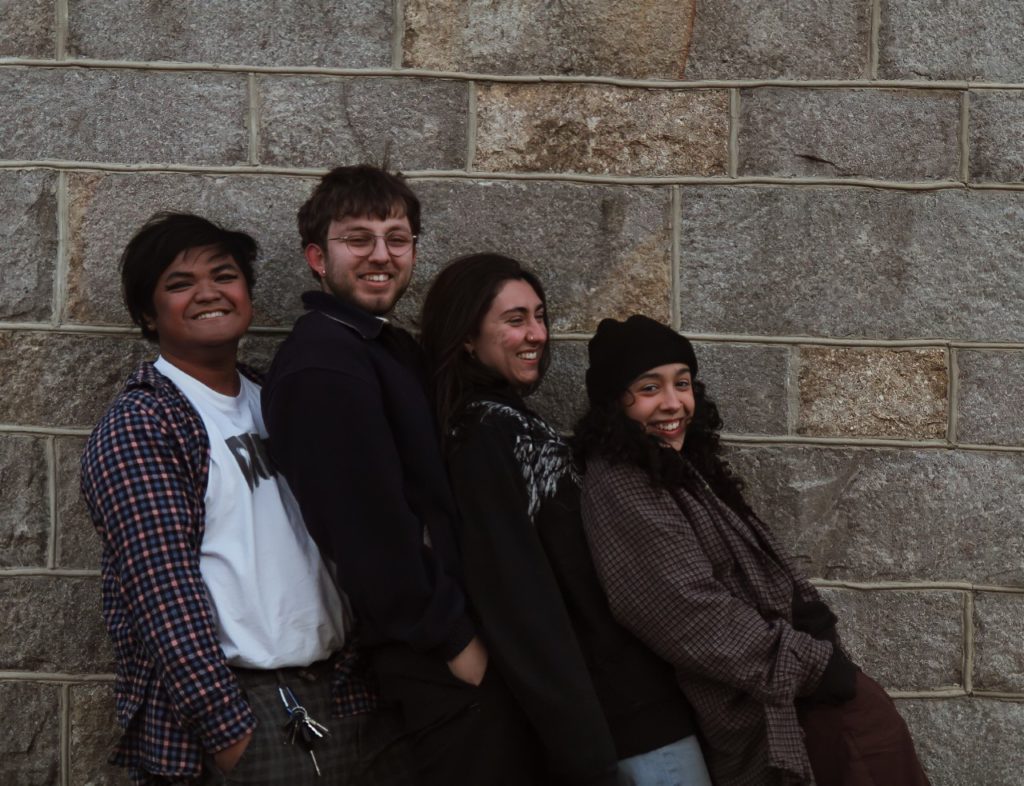 If you have ever been to a Trash Rabbit show, the aforementioned phrase will most likely be familiar to you. Die-hard fans of this Boston-based punk project ping-pong the words around the room at the top of their lungs while aggressively head-banging and moshing to the band’s fuzzed-out, feverish downpour of torrential sound.

Trash Rabbit — composed of Mena Lemos on guitar and vocals, Nic Adams on bass and vocals, Gibran Mobarak on drums, and most recent addition, Gia Flores on guitar — took Boston’s punk scene by storm since forming in 2018. From becoming a staple in the city’s house show circuit to recently opening for Guerrilla Toss at Somerville’s Crystal Ballroom, the four musicians demonstrate that they will not be loosening the tight grip that they have on the ears of Boston’s punk-lovers anytime soon.

The band’s origin story comes from the most unsuspecting venue known to punk-rock: a high school talent show.

Lemos, Adams, and Mobarak all grew up playing music, uniting forces once and for all when they decided to participate in their high school’s talent show — after all, a gig is a gig. Participants took to the stage, spouting verses of slam poetry and plucking songs out on their ukuleles. Little did the audience at Newton South High School know that Trash Rabbit had a different kind of act in store.

The three musicians effectively blasted the ears off of shell-shocked parents and fellow classmates as they covered the Red Hot Chili Peppers and the Beastie Boys. Lemos recalls, “I almost passed out from yelling {…}, little did I know that that was only the first time.” It was that early rigor and enthusiasm that drew Flores to the band’s shows during her freshman year of college, and she was soon invited into the fray after months of being a hardcore fan.

While a talent show debut might be a tad bit underwhelming for a band as boisterous as Trash Rabbit, the origins of the band name are a little more punk-leaning — Lemos and Adams were riding in the car with a bandmate from one of their former projects when they narrowly avoided colliding with a raccoon. “Our bandmate Tommy went: ‘Oh, it’s a trash rabbit,’ and we thought it was so funny,” Lemos recalls (‘trash panda’ is the typical moniker for raccoons). This simple mistake paved the way for a bright future, as the band happily adopted “Trash Rabbit” as their own forevermore.

Life as a highschool-aged band trying to book shows in the Boston area proved to be tough at times. As soon as venue managers heard “high schooler,” they suddenly became a little more hesitant to offer the band any stage time. “There has definitely been a switch since high school,” Mobarak confesses. “We were at the bottom of the barrel — we would be begging to play shows.”

But the tables have turned for the four — they’re older and wiser now. And while the early days of performing might have posed challenges, the band found a way into the music scene through the welcoming DIY community. House venues were more than happy to lend their dark basements to the band’s rambunctious sets for a couple of hours. And while the COVID-19 pandemic certainly did its number on the city’s vibrant music scene, the band asserts that it is slowly reviving. Lemos has noticed that now, “there’s a lot more options, and there’s a lot more art being made. It feels really good. It’s like a renaissance of sorts.”

This renaissance that Lemos speaks of does not only pertain to the city’s music scene, but to Trash Rabbit as well. The band’s discography is facing its own revival, as the four are preparing to release a re-recorded version of their debut EP, Trash/Cable. Originally written when Lemos, Mobarak and Adams were juniors in high school, the band happily finds that the songs still hold up, especially with the addition of Flores’s guitar adornments into the mix.

Getting into the studio to imbue the new Trash Rabbit vibe into the old “was very validating,” Lemos states, recalling how she would often be asked who wrote the tracks whilst recording, to which she would proudly reply: “I wrote it when I was 16!” The re-recorded EP is not the only new release Trash Rabbit fans can look forward to; the band continues to tirelessly craft new songs with a fresher sound that will go on the following EP.

Such new soundscape is omnipresent within the band’s latest single, “Way Out West,” a track featuring twangy slide guitar riffs layered over roaring power chords and snappy drum beats. Originally independently written by Lemos, the band worked together to fully restructure the track after Flores joined the group. Sprouting out of Lemos’ pre-college anxiety in 2019, the song initially radiated a much softer sound than what is now typical to the band’s releases. With input from Adams, Flores and Mobarak, the four molded the song into the beloved noise-filled ear-worm it is today.

“Mena and I are the primary songwriters, and we’re both very stubborn,” Adams states in regards to the band’s songwriting process. “We usually work separately, and then we’ll bring it together and show it to the rest of the people.” Having several other creative ears to help flush out the melodies is especially advantageous for the band as their sound continues to evolve. Especially within their more recent compositions, Lemos confesses, “I’ve been trying to write a lot more honestly — both lyrically and also in terms of what I want to hear. I write a lot thinking: Oh, this would go hard live.’ But I want us to do more stuff where we’re being more mindful about what we actually want to hear.” 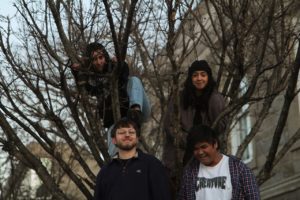 Punk music is the perfect vessel for the group’s endeavors in musical experimentation . Mobarak reveals in regards to the genre, that “punk music and our music is so open to interpretation, especially now {…}. Our influence is very punk, but we have a lot of jazz background. Just being at Berklee we’ve had to learn a bunch of music theory. It’s great, because we can use a bunch of complex chords and go crazy, go stupid, but then sometimes we make a song with three or four chords and that’s it. We can do both, because that is the genre right now.”

Though the band’s punk sound is ever-changing, becoming increasingly intricate and advanced as the years go by, Trash Rabbit fans can always expect to have an unforgettable time at the band’s signature, high-energy shows. And while they will always have a home within the Boston scene, the four are ready to spread their wings and share a little more of that good-old-fashioned Trash Rabbit love with other cities.

Flores eagerly affirms that the four will continue to, “run around, yell, have a good time, and jump with people watching,” wherever they go. Concerts with crowds merely standing around and occasionally head-bobbing along to the music is catastrophically lame in the eyes of Trash Rabbit. “I’d rather play a show where we have a bunch of people having the time of their lives rather than to 120 people that just look bored,” Lemos asserts. At a Trash Rabbit Show, she says: “Expect to dance. Expect to experience happiness — to laugh, to cry tears of joy, to watch people move,” “and to question your sexuality,” Adams adds in on the back end.

Besides providing their fans with a grand old time (and minor sexuality crises), the band seeks to provide listeners with a much-needed distraction from the everyday terrors that this world throws at us. “Sometimes making music that’s just fun, and that makes people happy is so necessary,” Lemos says. “Especially in times where things are not always happy — whether interpersonally or overall everywhere.”

And so, next time that the world has you feeling down, put Trash Rabbit on shuffle and dance, cry, scream, or laugh it out. But if the band’s recorded presence just isn’t cutting it, venture on down to the basements of Boston’s DIY scene — and maybe, just maybe — you’ll find these four there, shredding it up to their hearts’ content.