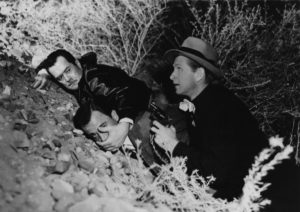 The Film Noir Foundation emerges from the shadows this weekend at The Brattle Theatre in Cambridge to present a scintillating selection of lesser-known capers and tone-poems from the golden age of darkness, otherwise known as the 1940s (give or take a couple years).

The ten films on offer are being packaged as five double-features, all screened, of course, in 35mm. They’re not all of them lesser-knowns, actually–Saturday night’s bill, for instance, includes Robert Siodmak’s The Killers (1946), a knockout Hemingway adaptation starring Burt Lancaster and Ava Gardner. On Sunday, though, be sure to take a walk on the rare side with Cy Endfield’s Try and Get Me! (1950), which the Foundation’s own Eddie Muller has called “one of the most emotionally devastating film noirs you will have ever seen.”