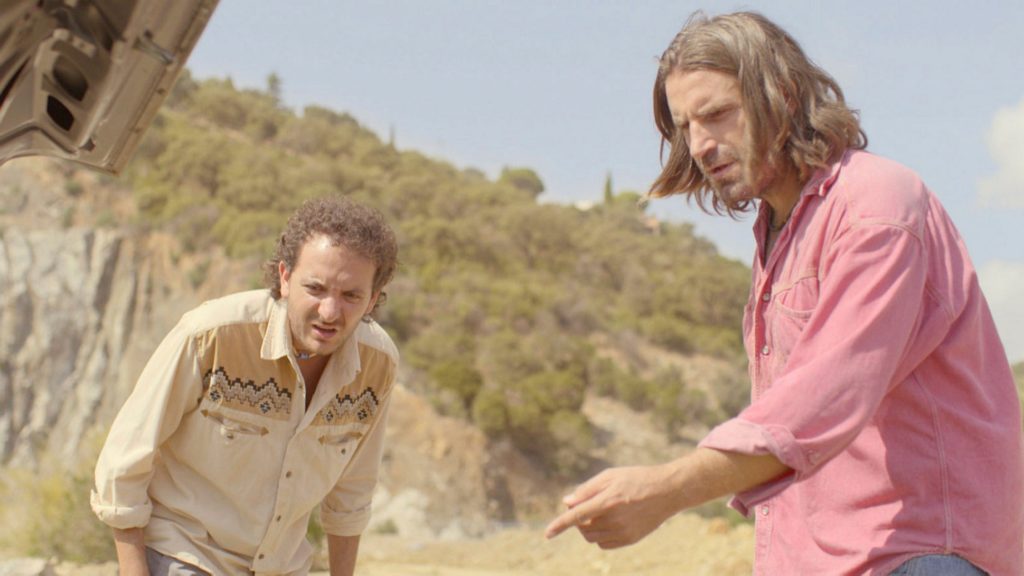 It’s funny how cyclical life can be. Seven months ago, Deerskin, the latest oddball comedy from committed weirdo director Quentin Dupieux, was slated to be among the offerings at the 22nd annual Boston Underground Film Festival. That obviously did not come to pass, and Deerskin would become among the first films released in the now familiar “virtual run” format. Cut to nearly seven months later: BUFF has partnered with a handful of like-minded genre festivals around the country to curate Nightstream, a brand new online-only film festival. The closing night selection is Mandibles, an even newer film by Quentin Dupieux, which is just as weird and wonderful as his last. Sometimes, things are meant to be.

Mandibles stars Grégoire Ludig as Manu, a dimwitted beach bum who makes a living (kind of) running odd errands for low-level criminals. For his latest job, Manu’s instructions are simple: find a car with a trunk, pick up a mysterious briefcase, and deliver it to local crimelord Michel-Michel. Vehicle obtained, Manu picks up his (marginally) more responsible friend Jean-Gab (David Marsais), who ditches his job at a service station to join Manu on his adventure. In a more conventional filmmaker’s hands, this would be the story. However, Manu and Jean-Gab have scarcely gotten out of town when they discover that the trunk of Manu’s stolen car contains a giant housefly, roughly the size of a medium dog. Sensing an opportunity, Jean-Gab hatches a plan: rather than complete the delivery and accept Michel-Michel’s money, why not train the fly to rob banks? In need of facilities, the pair hijack a hermit’s motorhome in the middle of the desert and begin coaxing the fly (who they name Dominique) with squeaky toys and spoonfuls of cat food.

I could go further into the plot, but it would ultimately become a laundry list of Manu and Jean-Gab’s misadventures. Dupieux isn’t known for crafting intricate stories, but rather ambling, surreal, shaggy-dog jokes of movies (his breakthrough, 2010’s Rubber, is about an evil, roving, telekinetic tire). Manu and Jean-Gab are two of the most purely hapless protagonists since Laurel and Hardy, hatching inane solutions to their problems and fixating on them with childlike determination– at least, until they’re distracted by a new plan. Ludig and Marsais play their characters with committed simple-mindedness, bungling even the simplest of tasks as they try to embark on a life of crime and bluff their way through an extended case of mistaken identity (their saving grace through much of the debacle is that most of the people around them seem to be nearly as vapid as they are). In a running gag, the two greet each other and acknowledge minor victories by locking finger-horns and exclaiming, “Toro!” When finally questioned on this odd quirk, they confirm what we suspect: there is no explanation. It’s just a dumb thing they do.

Yet there’s also an undeniable sweetness to this film. Jean-Gab is genuinely attached to Dominique, even as she expresses no outward personality beyond being a gigantic fly. Manu and Jean-Gab are deeply stupid, and show no compunction toward lying to or stealing from others to get what they want, but they do so with such a wide-eyed (if furrow-browed) naivete that it’s hard not to like the guys. You’d need to be a true idiot to imagine what they’ll come up with next– which is part of why it’s such a delight to follow them.

But I feel like I’ve spent too much time talking around the fact that this is simply a very funny, if deeply weird, little movie. Not everything works, to be sure, but the film is so fleet-footed and episodic that it’s never long before it jumps to the next gag. What’s more, at 77 minutes, it never wears out its welcome or resorts to unnecessary padding (you could marathon Mandibles and Deerskin in less than the running time of a single Marvel movie). Dupieux is bound not to be everybody’s cup of tea, but to those on his peculiar wavelength, his films are pure delight. And at this rate, who knows– maybe we’ll get another one by the end of the year.

World premiere via the Nightstream festival!