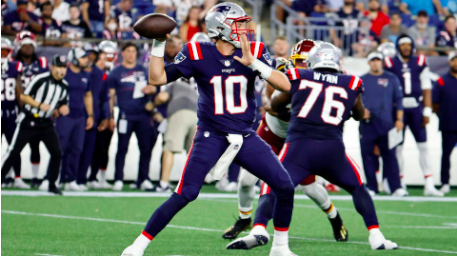 Week 2 is over. What have we learned so far, class?

Well, so far it seems like if you’re playing for Lombardi you are gonna need to score at least 31 points, 4 TDs and one Field Goal. Of the fourteen games that played on Sunday, six teams scored 31 or more points in victory (The Bills, Browns, Cardinals, Buccaneers, Titans, and Ravens). Not to mention three teams who scored 30 in a loss (The Chiefs, Seahawks, and Vikings).

We couldn’t even get to 31, even while putting Zach Taylor in the Figure Four INT Leg Lock. What else is there to say? History tells us, Belichick uses the first quarter of the season to evaluate what lineups and matchups he can lean on when December and January hit. Maybe this is a test for the young rookie?

The real challenges lie outside the AFC EAST, however. Mac Jones will never be the ace of spades like Tom Brady. But another former AFC East QB comes to mind as his ceiling: Chad Pennington. High accuracy and IQ, low mobility and even lower sex appeal. With no Gilmore (PUP) the defense looks formidable. However we haven’t played a single player in the NFL Top 100 yet. New Orleans is up next. Will Jameis Winston be more like the guy of week one or week two?