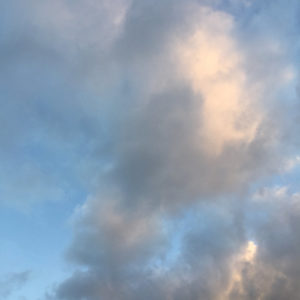 Boston ambient artist Moondrawn’s latest release is a perfect soundtrack for changing seasons. Recorded one Saturday night in Allston, and released the next day, Live at Teacher’s Lounge is a 25-minute journey through sweeping cinematic soundscapes and intimate tape-loop improv.

A formalist ear might hear this set as a theme and variations, its rotations orbiting loosely about a simple sawtooth swell—a wonderfully fertile kernel in Moondrawn’s hands. Throughout the half-hour jam, elements rise regularly to the foreground, like strange plants in time-lapsed bloom. Sometimes their retreat is unornamented, while at other points—particularly in the vocal prelude—great rumblings of sonic pressure collapse with pearly flourish.

A great deal of Teacher’s Lounge sounds remarkably like musical motion-picture, its shimmering and shuddering and glowing synths the seeming sonification of a train ride through a sun-washed spring landscape. Play it when the sky streams in through your windows one afternoon this April, or hear how sundown transforms Moondrawn’s work into an oneiric inkiness, setting a wonderful stage for a good sleep.