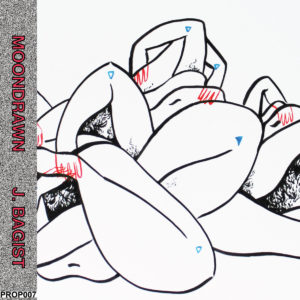 Let this awesome new split tape from the local artists Moondrawn and J BAGIST be more than just a blip on your radar. Let this tape illuminate it with sonic colors. Follow the sounds, see where they takes you. Property Materials — the JP-based tape label — delivers these goods.

Two tracks by Moondrawn fill up side A:

The first’s called “Tulpa.” “Tulpa” is a word has many meanings around the world, but it’s been taken up by theosophists and mystics. It connotes an imaginary field full of life, a semi-autonomous field that can be excited by magic, by divination. And here, what’s music if not the magic, Moondrawn if not the diviners exploring the techne of modular synths and tapes? It starts off with slow rumbles: it sounds low, like waves, but uncanny waves: they’re metal and machine, but wet and washed. They don’t stop, always ebb and flow. Time’s subsumed into nests of oscillations and distant electronic twinkles, rippling resonance and reverberating delays. Out of the the sounded ether as waves is the florid surfing of slight sounds.

The next’s called “He’s a sleepwalker.” A very cool track, and a nice contrast to the first, I think. I hear nestings of rhythms. I hear blocky fuzzy chunks of melody and motion like somnambulating feet, the lock-step gait of the Sleepwalker. Thinking of sleep, these steps fall like they’re walking on the fabric of a dream turned sonic: colorful sounds come like leitmotifs again and again, but slowly, subtly, changing. Simple elements abstracted, repeated, emerge something greater than the sum of their parts. The discrete becomes a melange, a wash, like a pinwheel becomes solid, at least till it putters away and reveals the air.

Flip the tape (or keep the files rolling) and J BAGIST enters on side B:

J BAGIST is a co-founder of the Property Materials, and these tracks were recorded right at the HQ. The first untitled track is a subtle and worthy synth-based ambient exploration. I hear an urgency and a tension. It’s hard to tune out: as Eno always hoped for ambient music, rather than a background music, it becomes a sounding board for reflection. It refracts my thoughts wily against the tense rhythmic pulses of an upper percussive layer, but this tension is attenuated by the grounding salve of the bass.The subtle modulations of the textures in between these elements are full of somewhat aleatory-feeling sounds that add chaos and interest. I’m a fan.
This release concludes with “Comments on the Code.” Driven by a bass loop, it starts off thick, fat, and freaky. It holds its harmonic ground. As more and more voices come in, it takes on an almost baroque rhythmic texture: it’s ceaseless, pounding, steady. A typewritten sentence with no stops. Nighttime careening down the streets of an imaginary technopolis, with sounds like flashing neon lights.