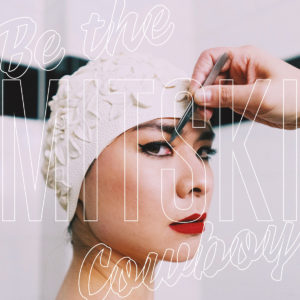 Last August, Mitski released a powerful album yet again. Titled Be the Cowboy, the set of songs are built around ambient noise, a softly played piano and, of course, her voice (I’m running out of tissues here, Mitski). As always, there is something old seeming about her music that cannot quite be pinpointed, as if it was made decades ago, yet it is still modern sounding  in its dreamy world making. The identity struggle, the not feeling fully a part of one’s given cultures, found on past albums is still there, but Be the Cowboy sounds far more Mitski than past albums. Her voice is far more clear and pronounced than in past work, touching less on the confusion and struggle of Puberty 2, but instead on heartbreak and loss.  This album certainly feels like she is solidifying her sound both emotionally and aesthetically, powerfully fusing synth landscapes and the classic four piece rock template.

This album is definitely sad, but I wouldn’t label it a “sad album”. It feels reflective and strong. The forceful synth and twangy guitar buoy her voice, which is far less quiet here than on past recordings. A sharp turn takes place as the the instrumentation turns aggressive on the song “Remember My Name.” The following track, titled “Me and My Husband”, offers another turn and a far more positive-sounding vibe. Her lyrics are still dark, Mitski stays true to her established aesthetic here. Songs like “Nobody” and “A Horse Named Cold Air” follow, both offering very dark perspectives via their lyrics and the emotion Mitski’s voice conjures.

As much as I liked this album, I am more excited to see what comes afterwards because of the growth and reflection on display within this song cycle. Be The Cowboy was released on Dead Ocean on August 17th, 2018 and is her 5th album so far.