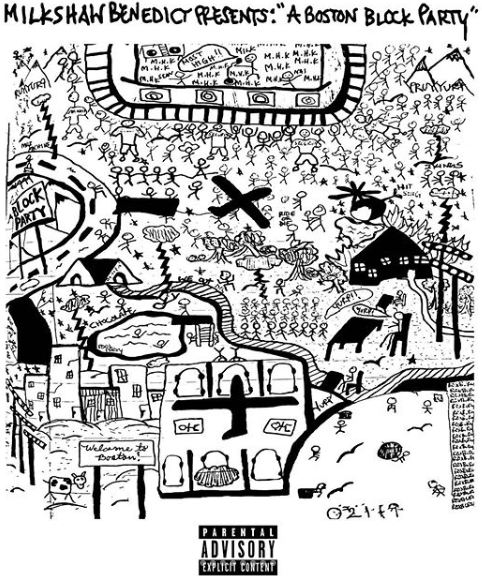 Milkshaw Benedict is a Boston-based musician, rapper, and singer with inescapable charm and undying positivity. His debut album A Boston Block Party is a funky mix of hip hop and R&B that really feels like a summertime hometown block party celebration.

You get the sense that Benedict has a sense of humor about what he’s doing. He’s not afraid of singing a bit out of tune all in the name of creating a positive energy. “A Boston Block Party” is a little over the top at times but is all in the name of having a fun time.

“Pool Party” is one of the album’s most care-free songs, complete with over-the-top innuendo, stretched vocal limits, and warbling synths, and of course, grooving bass line.

Of course, it’s also one of the album’s many moments of pure fun.

The live instrumentation on “Boston Block Party” really completes the album’s loose, feel-good sound. Lively bass lines keep up the energy throughout the album, and live guitar on songs like “Milk Machine” keep the sound diverse.

The album takes a welcomed mellow turn about halfway through with “Feel Good Song.” While maintaining the light-hearted delivery, Benedict takes it down a couple notches for what is almost a stoner anthem, qualified by the line “if you don’t smoke, that’s okay too.”

But the mellow phase is brief, as “Land of Unknown” picks the energy right back up. The bass is is funky as usual, but the super-catchy hook and solid verses make the track one of the album’s standout songs.

Milkshaw Benedict uses the album’s skits to set the block party scene and establish himself as a sort of hometown hero character. Cleverly featuring a DJ’s voice, Benedict’s own voice, and crowd noise, the skits really create the feeling of a block party hosted by Benedict and his friends. The charming and earnest elements like these make “A Boston Block Party” more than just a goofy collection of feel good songs. Benedict seems proud of the community in his city and wants to be a force of positivity in Boston.

Even when the sound is a bit rough around the edges, “A Boston Block Party” is overflowing with charm and positive energy. Milkshaw Benedict is definitely a Boston artist to watch.

A Boston Block Party is now streaming on Sptify, Tidal, and other streaming services.