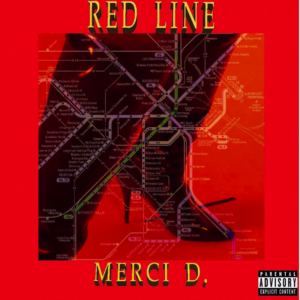 Cover image of the RED LINE EP by Merci D. An image of a stiletto boot with the MBTA map superimposed over on a red background.

When an up-and-coming rapper bills themselves in their first single as “queer… but my shit straight heat”, we know that the Boston rap scene is smiling on us in 2019. In her debut EP Red Line, Dorchester native Merci D. shows comprehensively that she may be the smartest MC that Boston has to offer.

Unlike its namesake, Red Line runs quickly; on one of many listens this past week, I listened from start to finish on the 1 bus between Central Square and Mass Ave station. Merci D.’s strength is her sharpness. Every moment of this EP is precise and delivers what you need, whether it be buildup, a killer punchline, or catharsis. Among the many bars that had me running it back was this choice selection from “The Vault”: “Need my bank numbers higher that Christopher Reid’s fade”. (If you don’t know, you better Google it!)

Merci D.’s sound takes risks throughout the EP, but still maintains a thread of confident experimentation. One short track, “Femme De La Creme”, sees Sekai spitting bars over a loop pedal recording of her beatboxing and repeating the title as a mantra. “Dorchester Dove”, “Wynup”, and “The Vault” are expertly-crafted lo-fi hip-hop records that allow her bars to shine, with a few singing interludes interspersed at the right moments. Finally, single “617” is a turn-up track with an underground sensibility akin to contemporary femme peers like Princess Nokia (NYC) or Big Momma (Central Florida).

But don’t get it twisted: there are no accusations of elitism or saddityness to be made in Merci D.’s music. Laced into Merci’s bars are Dorchester references that proves she’s earned her status as round-the-way girl on her come-up. In “Wynup”, she talks about the hole-in-the-wall food joints along Geneva Avenue: ““Tell ‘em to drive me to Geneva / Get some wings and a pizza / Pepsi 2-liter, make him pay for it / And leave after eating”. She references the 23 bus on “Dorchester Dove”, one key bus line that runs from Ruggles to Ashmont which, let’s be real, your average transplant living in Fenway is never going to know about. Similarly, she name-drops “the zoo on Blue” in “617”, referring to the Franklin Park Zoo (on Blue Hill Avenue). Whenever her music makes it to Genius, the commentators are going to have a field day filling in these references. Before then, though, her music is guaranteed to make Boston local hip-hop heads feel seen.

Merci D.’s flow is boosted by her affiliation with rap collective Blemme, an assortment of queer black women artists from both coasts. When she’s not recording music, Merci D. is a student at Hampshire College, where she is working on an archival project documenting queer and gender non-conforming Bostonians. If you want to support Merci D., be sure to stream Red Line on all major platforms, and/or donate to her Gofundme for her archival project.

You can find this EP on Spotify.

Hassan Ghanny is a writer and music journalist based in Boston, MA. For more of his work, follow him on Instagram @diaspora.gothic.

Liked it? Take a second to support Hassan Ghanny on Patreon!