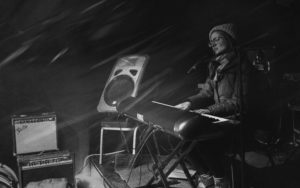 There’s a strange wave happening around the music scene lately. There’s a slew of solo acts with eccentric talent & careful architectural plans that cut to the core of the meaning of music making. Sidney Gish comes to mind on the Boston scene, but think of all the monikers of solo acts. It’s strange to me to take such an eccentric dive into one’s ego (& this is coming from a writer); to make an individual’s identity its own musical domicile so to speak.

But perhaps this dynamic within one’s outward musical explorations makes it that much more of a challenge to bravely face the cold winds of the industry & also make stellar art of it.

In Melissa Weikart’s case on Coffee, released December 14th on Worcester label HECTAPES, she undertakes this challenge with grace & frank emotion not found on many singer-song writer records that I’ve heard.

Like moving grand pianos with ease, Coffee lays bare musical creation in part to shed light on the timelessness of the arrangements of piano & voice, but also to hone a poetic narrative filled with remarkably poignant assertions & oddities.

With sonic sensibility similar to Regina Spektor, the music on the piano here ranges from classical to soul mere meters from each other. Yet this is not put forth as an artistic tool, but rather to set the sonic landscape with  intricate timelines, that to the keen listener, can shed light on the diverse, sometimes frantic tapestry of this short EP. The diverse narrative assertions of ‘Do I want you? I don’t know’ to the opening lyrics of the release, ‘drink too much coffee’ (made poignant with high octave staccato) is a foray into & demonstration of how to sonically pair music with a highly-caffeinated early 21st narrative. 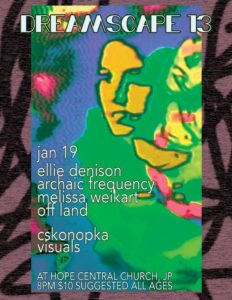 To see Melissa Weikart come to Dreamscape 13 brought to you by the rad dream-weavers here at the Boston Hassle. We’ll start sewing around 8 with Ellie Denison, Archaic Frequency, Off Land & Melissa Weikart. Visuals by cskonopka. & did we mention there’s pews? Like an actual Church so if you find yourself in a troubled state, zen out & let the sonic vibes suit your own sensibilities be they the stars, the freshest underground experimental music or your own inner journey…

Chris Hughes is a Music Editor & Writer for The Boston Hassle.