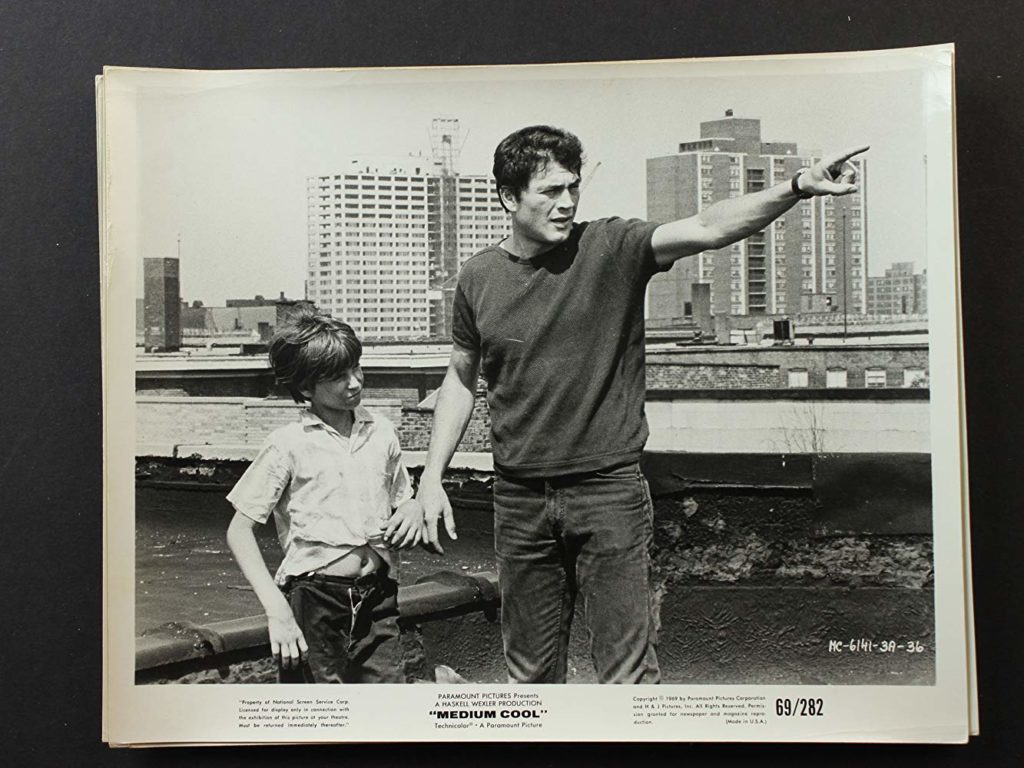 A thick, fun, direct, and at times confusing plot that prioritizes the story of the camera over that of the characters.

Holding and operating a camera and watching footage roll on screen are very different experiences.

An operator wants to get the composition just right. This means capturing the action that is necessary, hitting the right angles, and getting their subjects in the right light. Most of the time the job of the camera person is to make the image captured non-reflective to their existence. Camera operators know their success when the image is projected and the viewer is able to forget that the camera person had a hand in it whatsoever.

In this way, their job is to conceal their own craft.

Luckily for us, Medium Cool was not made to fit this convention. On the contrary, the film puts the viewer into the shoes of said camera person, blurring the lines between the screen we see and the camera lens which brought the image to us.

Early in the film a scene emerges that, like many others, straddles the seemingly wide line between cinema verite and scripted sequences. In it men act out what seems to be simulations of rioting and then, in kind, police and military men respond. This goes on for a while, after which we hear non-diegetic singing of “We Shall Overcome” paired with the image of gas mask donned military men carrying sit-in protesters away. A voice yells “Let’s get the guys with the cameras!” Men rush toward the camera, appearing as if they could jump right out of the screen into the aisles of the audience. Their arms are outstretched and hands come closer to the lens. They grasp for the camera, for the camera man, or even for us in our seats. One hand envelops the lens, and we are left in silence and black.

This effect is not threatening. Rather, it is confronting to an all-too-often subdued audience.

We are not left to look onto the action on screen unjudged or unacknowledged by the subjects in frame. We are now seen by them as much as they are seen by us.

This feeling of being confronted by the characters is woven throughout the film in obvious and more subtle ways. From subjects speaking directly to and pointing at the camera or us in the audience, to camera movements that reflects how one would move their own head in a given situation, even the casual allusion to those behind the camera, like when young boys on the street shout “Hey! TV Man!”

There are endless moments in Medium Cool where those behind the camera are called out or calling reference to themselves. This implicates the audience as viewer; J=just as the camera looks on, so do we. Bystanders to the commotion, or the joy, or grief or even the violence.

I wonder what the director, Haskell Wexler, thought of Gil Scott Heron’s poem/song The Revolution Will Not Be Televised, recorded a few years later. Medium Cool seems to be in almost direct opposition to that assertion.

The song asserts that the “Revolution” will not be anything that fits neatly into the regularly scheduled programming that is most of America’s day to day. It speaks to the revolution happening live, in the streets, without advertisements or color grading. Just people looking for freedom and equality in their 3-dimensional everyday lives. This film, though, would suggest that, “Yes, it will be televised, and there is nothing that any of us can do to stop that kind of information transmission.”

Through thick and thin in this film, the camera keeps rolling, and people keep watching. Will this be true even when riots are happening in our streets in 2020? Or in 2024? Will we still be watching the news or looking at our screens when we ourselves are the stories being cast? And if we were to put down our screens and our cameras, could we be trusted to engage or disrupt our realities? Should we be?

These and many more questions came to me while watching Medium Cool again to write this piece. Truthfully, I do not believe that the film does or aims to answer these questions. It is a conglomerate of visual and auditory information (much of which I would not understand at all without the context clues I have gotten from my mother who lived through this era) and while it has not yet left me with a strong message or conclusion, I do think it is a fascinating look into another time. One which makes me think more critically about the ways I engage today.

Medium Cool follows Johnny Cassellis loosely. He is a camera operator for a Chicago news channel in the summer of 1968. It mashes actual footage of the intense unfolding of protests such as the Democratic National Convention of 1968, along with other documented footage, scripted scenes, and scenes that blur the line between drama and documentary.

It primarily stars two actors who both passed last year, Robert Forster, who went on to have a greatly successful acting career, and Verna Bloom, a local from Lynn, MA, who apparently inspired Martin Scorsese. Both give fabulous and fascinating performances, along with other performers.

The true focus of this film, again, is the camera. A device which I am certain  almost each person alive today is somewhat familiar with, but a mechanism which, after watching the film, you may have a new set of queries towards.

Screens at the Harvard Film Archive on Friday January 31st at 9:00PM as part os the Cinema of Resistance Series!