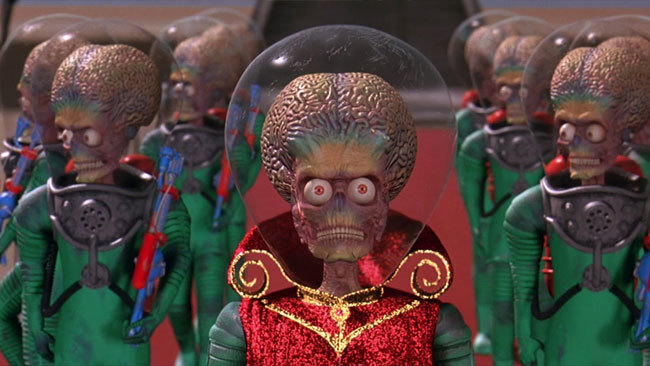 Mars Attacks! is an anomaly. It’s an anomaly in the career of Tim Burton, sharing little obvious DNA with either the loving, cockeyed character studies of his early career or the cloying Hot Topic-chic of his later work. It’s an anomaly in the filmographies of its extensive cast, mostly dramatic heavyweights letting their hair down for a little Mad Mad Mad Mad World nonsense (and a few whose stars had not yet risen). And it’s an anomaly in American cinema, a gleefully nihilistic would-be blockbuster that thumbs its nose at Hollywood convention. Sadly/predictably, its box office followed suit (it made back just over a third of its budget domestically, and barely broke even worldwide), but it’s a testament to its refreshing weirdness that it’s remained beloved long after many of its contemporaries have been forgotten.

Based (very loosely) on a line of notoriously lurid trading cards from the ‘60s, Mars Attacks, in the broadest terms, concerns the invasion of Earth by a race of cackling, enormous-brained Little Green Men from Mars. Upon receiving the first transmissions from the invaders, the president (Jack Nicholson) is cautiously optimistic, urging his cabinet (including scientific advisor Pierce Brosnan, press secretary Martin Short, and top general Paul Winfield) to greet the Martians diplomatically, to the protest of defense secretary Rod Steiger and first lady Glenn Close. Once it becomes clear that they have not, in fact, come in peace, the action essentially becomes episodic, jumping from Washington to seedy Vegas developer Art Land (Nicholson again) and his alcoholic, new age wife (Annette Bening), to a trailer park misfit (Lukas Haas) and his senile grandmother (one-time ‘30s starlet Sylvia Sidney), to the marital strife of serious CNN-style reporter Michael J. Fox and his (dramatically more popular) MTV-host wife Sarah Jessica Parker.

This is obviously a phenomenal cast (and I couldn’t even find room to mention Danny De Vito, Pam Grier, Jim Brown, Tom Jones – as himself! – or a pre-stardom Natalie Portman and Jack Black). In any other movie, most of them would qualify as too big to kill without alienating (so to speak) the audience. Refreshingly, Burton shows no such compunction, and by the time the credits roll more than half the cast has been reduced to smoking, neon-colored skeletons. Tim Burton has been treading water long enough at this point that it’s easy to forget how strong his hot streak was in the ‘80s and ‘90s, and, perhaps even more than the utterly gonzo Batman Returns, Mars Attacks feels like Burton luxuriating in a seemingly endless sandbox. Here he takes one of the most astounding casts of the 1990s, and tosses them into a remix of the greatest hits of 1950s sci-fi schlock; scenes are directly parodied from The Day the Earth Stood Still and Earth vs. the Flying Saucers, and the questionably-reliable translation computer is lifted straight from Plan 9 from Outer Space.

Mars Attacks came out about six months after Independence Day, and while the timing makes it unlikely that the former was intended as a parody of the latter, it’s hard not to think of them as two sides of the same coin. Independence Day is a gloriously unironic spectacle that, at times, plays like a phenomenally successful work of propaganda for the planet Earth (and, specifically, for the United States’ dominance thereof). In Mars Attacks, all parties are shown as buffoonish at best and fatally corrupt at worst (tellingly, the only characters who seem to have the film’s full sympathy are the misfits, the working class, and possibly Tom Jones). In Independence Day’s most famous sequence, Bill Pullman’s president gives a stirring speech about the human spirit to a roar of thundering applause before personally jumping into a fighter plane to help save the planet. In Mars Attacks, Nicholson’s president gives a hilariously condescending speech to the Martian ambassador in a roomful of skeletons that were once his chiefs of staff, which literally ends with “Why can’t we all just… get along?” Without spoiling one of the film’s best gags, suffice to say he does not receive the same reaction.

Make no mistake: Mars Attacks is deeply silly and unapologetically broad in its satire. But its worldview (universeview?) is bracingly cynical in a way one rarely sees in a Hollywood popcorn action comedy. Unlike so many studio comedies of the past couple of decades, there’s no third-act feint toward a “message” or by-the-numbers character growth. Instead, its pie in the face of sci-fi blockbusters, American jingoism, and anything else it can get its hands on continues unabated, like a Bugs Bunny cartoon that’s not afraid of graphic decapitation. I was twelve when I first saw Mars Attacks in the theater, and I left excited that such a savagely bonkers movie could be released in multiplexes. As it turns out, they’re fewer and farther between than I would have wanted, but at least, for a brief period in the ‘90s, this one managed to escape. Now, who’s up for some Slim Whitman?