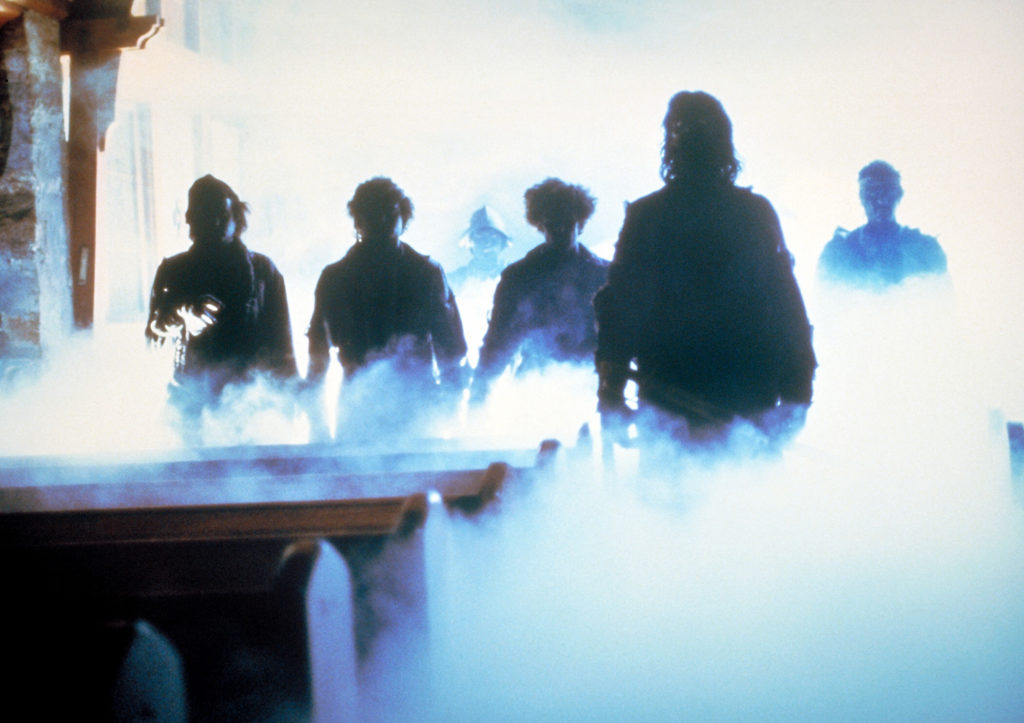 For Film Flam readers, Mark Anastasio should need no introduction. As program manager of the Coolidge Corner Theatre, his good nature, bearded face, and boundless cinematic knowledge preface a large percentage of the screenings we cover. Keep up to date on upcoming screenings at the Coolidge’s website, or just head over to Brookline– you’ll find something you like. –ed.

Working at an arthouse theater, you’d think I’d make it to just about every film event in the area, but I don’t! I spend so much time working on our own shows that’s it’s hard to make it to all the amazing film events happening at places like the Brattle and the MFA. As much as I would have loved to do something broader, I hope you’ll forgive that I’ve compiled this list of the top ten events I helped produce at the Coolidge Corner Theatre this year. If these sound cool to you, I promise we’ll keep doing our thing in 2018!

10) SUSPIRIA – Rare Uncut Italian 35mm print at the Coolidge After Midnite
The Chicago Cinema Society’s discovery of an uncut Italian print of Suspiria was one of the most exciting screenings of the year for us! We were proud to be part of its nationwide tour, despite debate within the horror community about whether waiting for the imminent 4K restoration was the better presentation. Two sold-out shows proved that horror fans were stoked to see this rarity on the big screen from an original print. Hot take: the print was stunning even with slight fade. Also, why not be excited for both?!

9) Cinema Jukebox: THE WALL with Brookline Music School
This program is one of my favorites at the theatre: “a film series that celebrates both your passion for movies and your love of music.” We’ve been able to screen so many concert films and music-themed cult classics. Our partnership with the Brookline Music School is one of the best things to come from this series. Before our screening of The Wall, a student band performed Pink Floyd songs while one kid simply constructed a wall out of Legos at the front of the stage. After they finished their set, they band kicked down the wall.Our next season of Cinema Jukebox begins on April 19th with the area premiere of Grace Jones: Bloodlight and Bami. Rock ‘n’ Roll!

8) BRING ME THE HEAD OF ALFREDO GARCIA with Author Charles Taylor
The publication of film critic Charles Taylor’s book Opening Wednesday at a Theatre or Drive in Near You: The Shadow Cinema of the 1970s gave me the justification I needed to program Sam Peckinpah’s unfairly maligned masterpiece in prime-time at the Coolidge. The print was perfect for a title this dirty, and Charles conducted an excellent Q&A in a time where material like this isn’t easily digested. What a film! Warren Oates needs to be on our screen more often. That actually may be my New Year’s resolution!

7) KING KONG – Coolidge at the Greenway
The Rose Kennedy Greenway Conservancy started us in the business of putting on world class outdoor film screenings, and this summer’s 35mm presentation of King Kong was a highlight! We look forward to bringing more film to downtown Boston!

6) DUNKIRK in 70mm
The only reason we can do any of these shows is because of our supremely dedicated and talented projection department. Our run of Dunkirk in 70mm over the summer was especially cool because it gives our projectionists time to shine (dad joke intended). We’re dedicated to exhibiting film whenever we can, and this is the mother of all film formats! Come see our booth in action when Phantom Thread opens in 70mm on January 12th!

5) Camp Crystal Lake at Rocky Woods Reservation: Part 3
Our partnership with the Trustees of Reservations has allowed us to put on really spooky outdoor film programs at their Rocky Woods location. I mean, how perfect is it to watch summer camp slasher flicks at a spot that has a cabin alongside a lake!? We ran Friday the 13th Parts 2 & 7 on Friday, October 13 for a match made in HELL!

4) FITZCARRALDO at the Coolidge After Midnite
Simply the most beautiful 35mm print we ran in the past year at our program. The print was flown in from the Deutsch Kinamathek Museum in Berlin, and the extra expense was worth every euro. Werner Herzog’s crowning achievement sparkled on our screen. We’re thrilled to be hosting Werner in person as our 2018 Coolidge Award honoree on February 8th, and I hope we get the chance to go back to the Amazon!

3) THE FOG with Adrienne Barbeau
Our Coolidge After Midnite audiences have grown so much over the years, and the Coolidge After Midnite Award was dreamt up as a way to bring fan favorite filmmakers to that series as a way of thanking the people who support us weekend after weekend. We were thankful that the stars aligned to help us bring Adrienne Barbeau to Boston for a super rare screening of The Fog on 35mm (we were only allowed to book rights because of Adrienne’s involvement, thanks Rialto Pictures!). She was a gracious guest and very generous with her time following the Q&A, staying to sign autographs for everyone who wanted one. Stay out of the fog!!

2) THE BEYOND with live score by Fabio Frizzi and his Frizzi 2 Fulci Band
A legendary show. The Maestro was simply the best. Working with everyone at BEAT Records to put on this show was a ton of fun from start to finish, and what we ended up with was a concert and film-going experience that was one for the record books. We’ll be talking about this one for a long time at the theatre. Seeing Maestro Frizzi’s composer’s cut with a live score was physically thrilling! My heart was racing during the tarantula scene!

1) Cemetery Cinema: THE SEVENTH SEAL & HAROLD AND MAUDE at Mount Auburn Cemetery
I’ve long wanted to put on a screening at this gorgeous location. The folks at Mount Auburn were wonderful partners and totally game to add film exhibition to their numerous other arts events. Watching this double-feature contemplation of life and death at one of the most gorgeous cemeteries in the country was an experience I’ll never forget. It was a perfect night and the audience was amazing. The type of wonderfully successful show that gives you the energy to do more. And we plan to!

See you at the movies!