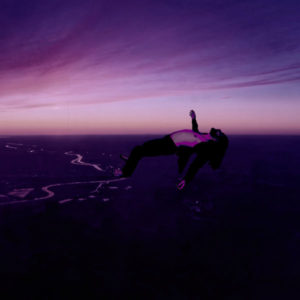 On Upside Down, Man Without Parachute, fronted by Boston music scene veteran and multi-instrumentalist John Ducharme, employ a “more is more” ethos. During its (very) ample run-time, this 13-track offering features a robust mixture of emotional intensity, multi-colored atmospherics and sonic wizardry. The album opener, ‘All Wake In A Delicious Growl’, commences with towering reverb-soaked, Hendrix-summoning, guitar howls and a crushing drum roll, before throwing down a nasty bass and drum groove. From here on out, Ducharme and co. criss-cross a diverse landscape of sounds, styles and ideas.

If forced to use a single descriptor, one would maybe declare Upside Down a psychedelic rock record. However, that would not only be a lazy catch-all, but an inaccurate one, imo. Though it uses a similar approach to some classic psychedelic music with its instrumentation and ample use of effects, I would be more inclined to position Upside Down somewhere between post-rock, jazz fusion and math-rock. In the end, this is simply to say that there is a lot going on. And that is not a bad thing.

No doubt, Upside down is experimental, but also forgivingly accessible. Even during its most spazzy moments, these tracks still seem grounded with intent, never meandering into pointless wankery. Wailing guitar theatrics and fuzz-fueled synth freak outs partner with solid, head-bobbing rhythmic drive. As the record moves along, MWP’s softer, subtler side makes some appearances, providing some breathing room. Tracks like ‘Squirm Marble’ are downright dreamy. It is clear that Ducharme has the focus for clever songwriting, while flexing his experimental muscles. While the list of contributors on this album is lengthy, the playing is tight and consistent.

On its Bandcamp page, John Ducharme states that he formed Man Without Parachute to appeal to his experimental impulses. Luckily, Upside Down proves that MWP can create a thoughtful, dynamic and, dare I say, fun record while satisfying the artists’ desire to push boundaries and exceed expectations.