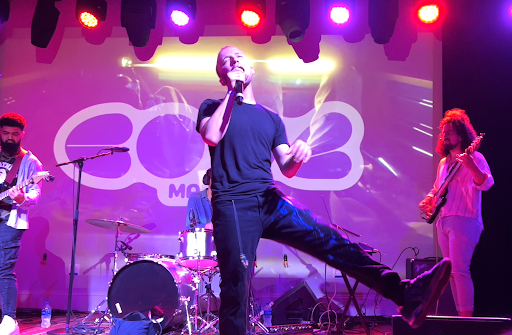 “Crystal Ballroom. June 30th. Bet it in Vegas, it’ll be the show of the summer.” The tongue and cheek “proclamation” made by Maeko during his album analysis episode for new album ‘Cool’ on our podcast seemed innocent on the surface. “Yeah, nine days into the summer, show of the summer” jokingly adds Dephrase, the executive producer and frequent collaborator for ‘Cool.’

Despite the wholesome, humorous approach, as I left the home studio of Dephrase at the conclusion of recording the episode, I couldn’t help but feel there was some truth embedded in our exchange; as if these two talented creatives were onto something, manifesting the possibility of truly putting on an impactful, memorable show. The thought excited me, that the album release concert for ‘Cool’ would fulfill and live up to all they dreamed it to be. The purity of their demeanor in its potential had me silently rooting for them.

It’s one thing to manifest an event or moment, and it’s another to put it into practice and make it happen. Maeko seemingly did everything right leading up to ‘Cool’s” album release concert: whether it was the marketing and promotional ideas, to choosing the perfect venue of The Crystal Ballroom in Somerville, MA, to selecting a variety of talented local acts by the likes of Sleeping Bela, Timi O, and dev soter. The success of this show had just as much to do with each methodical decision leading up to it as it did with the execution of the night itself. And having the blissfully gracious talent of Sleeping Bela to start things off was the perfect beginning. 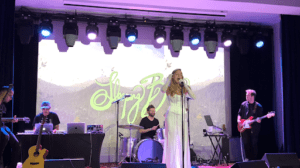 Sleeping Bela is a vocalist and artist I have been enamored with for many years. Her atmospheric blend of synths and keys along with the tenderness and beauty of her vocals have always captured a sense of purity with her music. And her opening live performance did not disappoint to deliver these exact sounds and emotions. The combination of Bela dressed in a long, white gown to go with an aesthetically pleasing nature-themed backdrop, along with her vibrant live band, ultimately made for a magnifying moment. 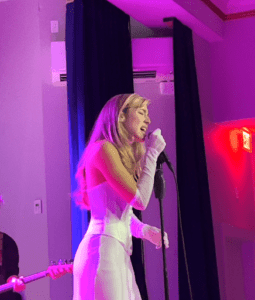 I recall the word “purity” again creeping into my psyche as I watched Bela gracefully deliver powerful vocals of emphatic tracks off her 2021 EP ‘Insatiable’ such as “Baby Teeth” and “One Touch.” She also threw in numerous unreleased songs into her set, which had the audience clamoring for more. I also admired her transparency with the crowd, as she claimed she was just getting over battling an illness the week prior, and was worried she was not going to be able to hit the notes she wanted to. However, she did not want to sell everyone short by lip-syncing. As a fan, I really appreciated this from Bela; her personality and confidence building with each song. From a talent standpoint, if you have not seen her live, I highly recommend it. 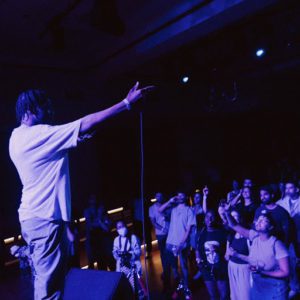 As I’ve gotten to know Timi O over the last few months, whether it’s seeing him twice live this year, and having him on our podcast, his talent is undeniable. As a pure stage presence, I believe he needs to be in the conversation as one of the better live hip-hop acts in the state of Massachusetts. As I wrote in my last article about him back in March when he and fellow producer l.ucas headlined their show at The Rockwell, his charisma and energy on stage is unmatched. 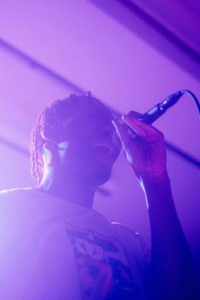 But the element of Timi as a performer that strikes me the most is his ability to deliver bars with such ferocity, and then switch completely to singing soft, lush vocals almost on a dime, the best example of this being 2022 hit single “carefully.” He was able to build off the momentum from his previous show, as he made it a point to include more dance moves and utilize the space of the stage, resulting in an even more engaging performance

Timi performed other classics already in his catalog, including “Cassius.” and recently released banger “Steady Hand,” while also showcasing brand new singles such as “Insolence,” “Depart,” and “Cheddar.” He finished off his set with the sentimental “check on your strong friends,” a song that highlights supporting people in your life who may seemingly have it all together, but in reality could be struggling. His social awareness to end on such an emotional note proves Timi’s well-roundedness as an artist and person. 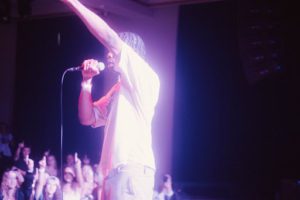 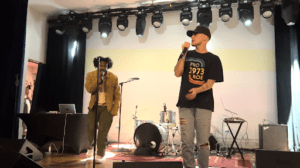 Fresh off the release of his new EP ‘Just My Luck,’ dev soter blessed the crowd by performing the project in its entirety from front to back, starting with the opener “PILOT.” Johan Lenox’s vocals on the intro track rang through the entire ballroom with the crowd holding its collective breath before dev began emotionally singing his second half of the song. 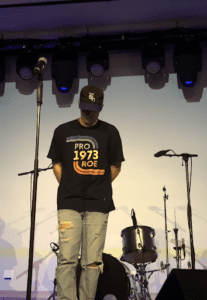 The slow build of his set ultimately paid off, as dev passionately performed single “TIME OF DAY,” easily his best vocal display of the evening. He continued with some enthralling moves as he jammed out to the abrasive punk guitar chords of “EPIPEN” and “BETWEEN THE LINES” before he brought out guest STEFAN THEV for one of the most rejuvenating performances of the entire show.

Dev & STEFAN’s cohesion on stage was astounding; the way the two of them seamlessly moved about the stage with the perfect balance of precision and overwhelming energy, belting out the vocals to their punk rock anthem. It was a performance that rung throughout the Crystal Ballroom, the vivacity and pure spirit incredibly palpable and only second to a performance of one particular song that was still to come. 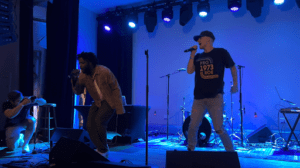 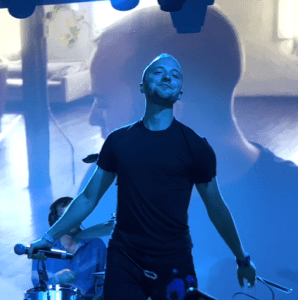 The opening acts surely put a lot of pressure on Maeko to follow up with a memorable performance, and he did not disappoint. With support on stage from Dephrase (bass, keys), Sam Gelston (drums), and Antonio Loomis (guitar), the already pulsating and invigorating album ‘Cool’ was brought to even more sonic life, with a montage of clips from the upcoming short film of the same name playing in the background. The band began to cater to the absolutely packed crowd with the low-tempo, somber “Click, Flash, Polaroid,” before following with a cathartic performance of second lead single “Flood.” I was pleasantly surprised as they were able to execute a variety of older tracks from Maeko’s discography such as hit single “Raspberry,” a strong, rhythmic indie alternative vibe that undeniably flows through your veins. (I also appreciated the raspberry colored aesthetic of the lighting during it). Among other nostalgic Maeko songs embedded in the performance included “Technicolor”, “Lila”, “Woozy”, and the easily sing-a-long, contradictory “Don’t Listen to Me.” 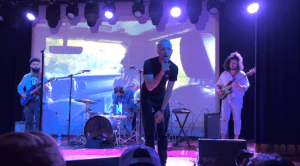 The collective instrumentalists brilliantly played their roles throughout the set, as I was enamored with their consistency and cohesion. But alas, Maeko as a performer is what brought the night to its peak in terms of enjoyment. His positive energy was vibrant and palpable, belting out every syllable with passion that engaged every member of the crowd. He interacted with the audience on numerous occasions, and made it feel as though there was a deeper connectivity between every person in the room. 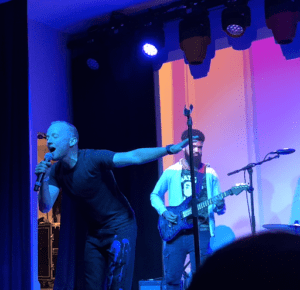 Knowing Maeko as well as I do, I am sure this was something he intended to pull off, but truthfully it feels like he’s always had this ability to bring people together. His music has this strong wave of spiritual power that makes it truly special. The best example I can give of this was when Maeko and company performed lead single “Cool”, and the entirety of the audience sang along and bounced around in unison. Everyone was so captivated by it that the collective chanted for them to play it again. Moshing to “Cool” with the likes of Timi O, STEFAN THEV, and producer Owen with numerous others surrounding us is an experience I surely won’t forget anytime soon.

All in all, there is something special about Maeko and his stage presence. Especially as he closed out the evening on one of his most spiritual songs to date in “Skygarden”, I couldn’t stop myself from smiling, genuinely happy this talented musician was able to pull off something he had manifested and dreamed about for so long. It was a moment I can’t easily explain in words. 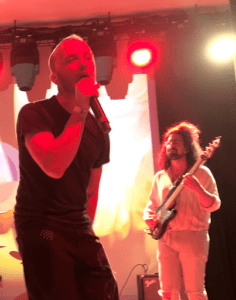 In the weeks that have passed reflecting on the show, the word “purity” that I’ve used many times throughout this article still buzzes through my mind. Only the upwards of 300 people who were there will know what I mean about this specific show, but many of you reading this probably can relate on some level, and have seen a show that left you with this indescribable feeling. 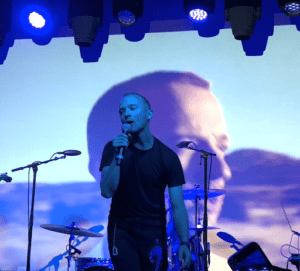 Many concerts are excellent, enjoyable experiences, but there’s always one every once in a while that leaves you with an overwhelming sense of euphoria, one that lasts for days, weeks, and even months after. Is ‘Cool’ truly the “show of the summer”? Perhaps. It’s a question flurrying with subjectivity, leaving it up for debate solely based on personal preference. However, in my eyes, providing a purely authentic, euphoric experience for an audience is rare. And that, for Maeko and company, should surely be enough to last a lifetime.