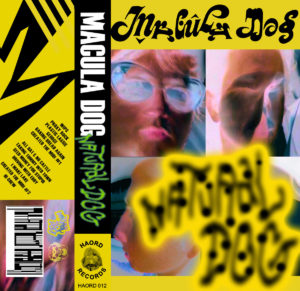 You know that one time you went to the local carnival as a kid and the employee running the ring toss game was visibly drunk and stumbled over the booth and fell onto you and you watched him get escorted out while feeling a mixture of amusement and naive disillusionment with your favorite autumn-time event? The Natural Dog EP by Macula Dog probably wasn’t playing, but it should have been. It would have been better than whatever Black Eyed Peas single was blasting out of the PA.

Haord Records have proven their grotesque-by-way-of-zany trademark again with Natural Dog. This time around, Macula Dog aren’t afraid to work in a less maximalist approach than the chaotic Saturday morning cartoons of their past two albums. Yet despite giving a bit more space between the instruments in each song, Natural Dog remains as versatile as it is freakish. The percussion sounds more springy than deep hitting. The wonky synths buzz into jerky melodies. The metallic vocals are distorted into vaguely pop chants.

But don’t get me wrong – the Natural Dog EP is a damned blast. It’s a frantic and pro-weirdo jumble of 13 short tunes. Songs with a hard, rollicking beat like “Baking Bread Again” are contrasted by glitchy noise interludes like “Created the Midi.” Even after hearing it several times, I still feel disheveled after the EP’s 19 minutes grind their way through synth pop, zolo, new wave, and somehow spoken word. Give it a listen: