There’s that scene in Men In Black where J and K are in the elevator. J., having been invited to join the secret government organization whose purpose is to monitor, license, and police all alien activity on planet Earth, is shown a photo of a young Agent K presenting flowers to a giant alien on a desert highway surrounded by law enforcement personnel in dark suits. The photo is black and white, and the disbelieving James Darrell Edwards III (soon to have his name permanently shortened to Agent J, wearing the last suit he’ll ever wear, we know) remarks disbelievingly: “Aw, you brought that tall man some flowers.” 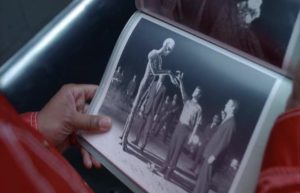 Now come over here to the real world. A looming being, quite possibly returned from an alien land we’ll never know, has just brought us some flowers ourselves. That celestial sojourner is Loaner Sunstone, musical moniker of JP-resident and longtime songer-on-the-DL Gordon Spencer-Blaetz. And those flowers are the 13 tracks of gentle rock-outs and quiet observations that compose his most recent release, Time Is a Machine.

Somewhere between the lower-fidelity revelry of Alien Lanes–era Guided by Voices and the straightforward, deceptively simple and clear songwriting of a young Neil, namely a Neil Young, is Loaner Sunstone’s home planet. And while I as a listener (or jaded prick) have a hard time with comparisons like that one, I find the struggle to think of another recent release of this type and length that remains so firmly rooted in the same beautiful alternate world across all its disparately woven tracks even harder.

Like previous Sunstone releases, Time Is a Machine forces nothing and asks for nothing in return. It only invites us to ride down the same long, metallic slide Gordon was sliding down into the earth when the album’s title was whispered to him in a dream.

Particularly striking is the gentle power of these songs to locate almost every resonant frequency of the human heart and perch there, simultaneously, soundly, throughout the album. There is complexity in the laughable sadness of “Shoe” (“When I see a shoe on the side of the road / It’s the loneliest thing, oh yeah / It’s mysterious”), which, under cover of simplicity and humor, docks a huge ship of despair so quietly we barely even notice it in us. I also admire the understated beauty and, again, humor of the opening track, “Amateur Birders,” which, following a short list of bird types sung over a slow and reflective assembly of warbling chords and some kind of droning melodica thing, culminates in a gentle call to action: “Amateur birders of the world unite / Amateur birders of the world take flight.” I dare you to read the song title “My Poor Boss” and not chuckle. All the while remembering that rock and roll is, above all else, a feeling; stop trying to understand the words in that vocal track and just rock the fuck out, gently.

Listening to this album, I am forced to reflect on the over-over-over-thinking and fumbling that so easily cakes its way onto the walls of songwriting. And how in the smog of the present day it is so refreshing and even exciting to breathe deep from Time is a Machine, a bouquet with a clear and pleasant stank.

We know, it’s hard to focus and it’s hard to be simple. But this album reminds us how important it is to try. To slow down and take in and take note of the world, with all its beauties and uglies and humor and magic. Remembering that sometimes, probably all of the time, a good song is just a good song. This is a great album. Thanks, Gordon.