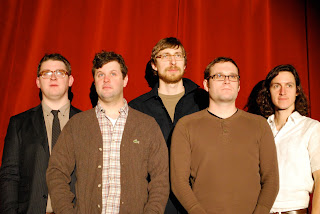 Boston’s MARCONI released a record called MINUTES TO MANIFEST DESTINY a little while ago. And it is one beautiful pop record. The record is full of crooned melodies, and tongue twisting lyrics draped skillfully over droning
repetitive riffs, and the results are stirring. This is majestic pop, at a majestic pace, often with melancholic overtones. Shimmering guitars(and the occasional acoustic(perhaps ukelele) strumming) spread forth throughout the proceedings,
recalling MARCONI’s main man, Luke Kirkland’s, former band the wonderful NIGHT RALLY. And it all works. Kirkland’s elastic vocal delivery and flow are very refreshing within the context of the “rock” sounds found on this record. The record’s best track is called “Chaise Lounge”. And it’s a WHOA. Soaring. Constantly shifting chord progression. And then the chorus shows up and knocks you right down. Had that one on repeat for a while. And just when you thought those shimmering guitars have taken a break on this track they show up to close the door on the song.
One of the better Boston area releases of the year. See them live soon and pick up this record!