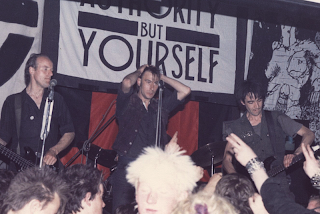 Crass were a British punk band started in 1977. They are one of the most fascinating, in your face, and simply awesome bands that ever existed, and the progenitors of anarcho-punk. For me personally they stood out not only for their overt politics, snarky view of the world, and deeply ingrained anti-establishment stances, but also, and more importantly so for my young brain, for their refusal to be boring, their refusal to adhere to the cliches of punk that essentially ruined so much of punk for me. As a youngin CRASS was IT when it came to punk rock.
They were accepted by all the “real punks” as “legitimate punk”, but they didn’t
fit the molds that usually accompanied “legitimate punk” wherever it went. And that right there is why they were so beyond badass to me(and why so much other “punk” wasn’t) and why, as much punk faded into the background as I became conscious of the wide breadth of interesting music in the world, CRASS stayed with me. I don’t agree with all of their politics, or all of their stances(I certainly agree with many of them, and perhaps they even started me on my road to longtime vegetarianism). But CRASS stood for what they believed in strongly, got it across in their music tunefully and interestingly, and then they cut the fuck out. 1979’s STATIONS OF THE CRASS(their 2nd record) is one of the greatest records of all time. It belittles the record to simply call it a punk record. More often than not it sounds like some ragged post-punk thing with the variety of rhythms, and approaches going on all over it. Songs like “Chairman of the Board”, “Big Man, Big M.A.N.”, “You’ve Got Big Hands”, and “Crutch of Society” are nothing short of concise anthems of anger, rage and frustration. Get with CRASS and redefine your idea of punk. They’ve just reissued all of the CRASS records, but I can’t find info on where you can get them from the band, so check good record stores and you’ll find them there.