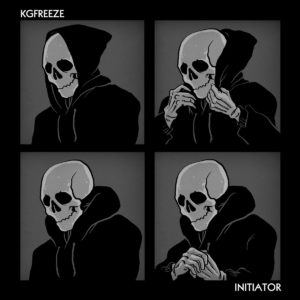 KGFREEZE is a loud and heavy power rock band from Portland, Maine. Their hook is to provide an eclectic mix of screaming vocals with metal influenced pop-punk instrumentals that underpin the record. On this album, they sing about anything from heartbreak to werewolves to The Beatles not being for them.

The metaphors hurt like a sore thumb and bring out the inner emo kid inside all of us. They work together with the ever-changing musical styles to make this record as exceptional as it is gripping.

The first aspect of the record that jumps out is the diverse array of metal genres on display in KGFREEZE’s instrumentation. On some songs, I hear classic death, on others post hardcore break downs. “Christian Skater” is driven by low and slow doom metal guitar melodies. So it’s really an entirely different feel you’re getting with each song.

The album’s lyrics come with a B-horror movie feel at times. Freely dropping Werewolf references in a world where Warron Zevon & Michael J Fox comprise the cultural masthead, KG FREEZE is reclaiming the werewolf. The lyrics constantly reference werewolves either blatantly in the titles like “Wolf satellite” or “Follow The Moon” or subtly like in “Christian Skater” in the lyric “all you find are deadlines.” My favorite lyric on this album is easily on Fleetwood Maxx when they say:

“we threw on Tusk for the second time,
complained about the songs that kinda sounded alike,
I was saying that was kinda the point
we were passing ‘round a second joint.”

These comments are true IMO and show the band’s sense of humor. KGFREEZE’s lyrics are the perfect balance between angry with the world, full of heartbreak, and humorous, so it never leans toooo heavily in one direction.
So if you’re into metal, or metal-core or post hardcore & would like to have a taste of what they sound like together, check out this record. Or if you’re in the Maine area and want a gripping band to see, don’t sleep on KG FREEZE.

Liked it? Take a second to support Michael Mambrino on Patreon!