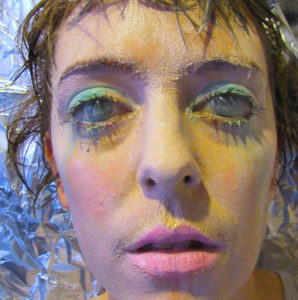 What Was The World, the latest album from Kate Ferencz, is as undefinable as most other releases on Cold Rhyme Records. But what does it mean in 2018 to be “undefinable” in music? Is it using an endless library of genres to switch styles from track to track? Is it carving yet another niche in an already crowded market of music? Is it an artist improving upon their past style and elevating it to something entirely new? Sure; yes; of course. What Was The World is all of the above.

The album opens on a bouncy, indie-pop streak of dance songs. Making a comparison between Ferencz and other artists may be futile, but here I go anyways! The first few songs are reminiscent of Cowgirl Clue’s playful vocals and non-club-ready beats, but with the raw edge of early U.S. Girls. “The Person Whose Job It Is To Stop You” sticks out the most among these first tracks. Ferencz sings urgently, as if each breath could be her last. Yet, she holds a subtle melody that follows a looped drum beat with chopped vocals. This instrumental pattern pops up across What Was The World’s pop, psychedelic, and punk tinged sections.

Much of the album explores what one’s body and mind means to them as a person. Sometimes, there are two sides vying for the energy of the singer, as hinted at by opposing song titles like “Devil Wants Blood,” and “Heaven.” This conflict is laid onto the table on “Tultepec.” One of the hazier, more disorienting songs on the album, “Tultepec” has Ferencz think aloud, arguing between doing “the most evil thing” she can think of, or something “uplifting and beautiful.” She ultimately can’t decide, and doesn’t want to put in too much work anyway, so instead she figures out “some kind of compromise” Her heavily reverbed vocals echo over the lo-fi instrumental until the track abruptly ends, exploding into the next track “Punch.” If the previous song was contemplation, “Punch” is all about action: “I got no idea/ and I got no name/ as much violence as possible/ completely without the pain.”

What Was The World closes with one last hypnotizing bop, “Decadence and Decline.” Perhaps the most accessible, warmest song on the album, a panned vocal sample chanting, “say that you love me” accents Ferencz’s own vocals. The album ends on the lyrics, “Your mind is mine, all mine/ I have known you inside-out for a long time,” a haunting finish for the erratically energetic album.

If the world ever needs a musical alternative to blood-doping, Kuebiko has it covered. On their new project, 4 Minute Warning,…