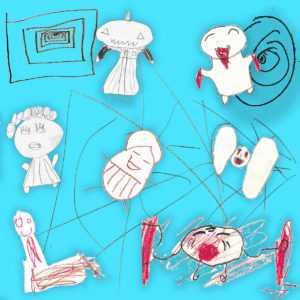 Brave Spaces, a new kid-performed project recorded, compiled, and released by JP KidsArts, a Jamaica Plain–based grassroots creative space dedicated to exposing local youth to the arts, sounds—as has been noted in past KidsArts Hassle reviews—like anybody could have made it. In the best way: Brave Spaces’ sonic textures are as exciting and boundary-pushing as almost any modern experimental jazz or punk record. (This makes sense, given KidsArts music programming is led in part by accomplished Boston musicians, including Kevin Wynd (Matt D. himself), Scott Mizrachi of Old Wave, and Rubin Hohlbein of Queen Crony.) And the record is enjoyable, too, beyond just its (impressive) immediate context.

I chatted with Matt Delligatti, the Program Manager of KidsArts, about the new project, the program in general, and the importance of exposing youth to music.

We’ve linked the album’s Bandcamp page at the bottom of this article; please consider buying the record or donating to KidsArts to keep their programming going during COVID-19!

N. Malte Collins: How did Brave Spaces come about? What’s its relation to 2020’s Making the Band?

Matt Delligatti: KidsArts is an arts after-school and summer program based in Jamaica Plain serving kids in grades K–5. Brave Spaces is a compilation of all the music we made in 2020! It’s got tracks from four of our workshops: Making the Band; Sing-a-Song; You Write it, I Sing It; and Punk Rock Basix.

Making the Band and Punk Rock Basix were classes we were running in person before we had to close due to COVID-19. I led Making the Band alongside another teacher, Tony. Each week kids rotated through different roles that go into being a band: instrumentalists, singers, recording engineers, and music video producers. We released our album in the spring and also made this music video which has some stop motion and some shots from the workshop.

Punk Rock Basics was led by our teacher Rubin. It was about punk music as well as punk aesthetics and attitude. Kids wrote songs about things that they were angry about, did punk dancing/moshing, and made tattoos.

When we closed in the spring we wanted to stay connected to our families so we put out a series of virtual offerings that kids and families could participate in via Zoom or by sending art back and forth via email. One thing I offered was You Write it, I Sing it. Each week kids sent in original song lyrics and I turned them into songs and music videos. The music videos are not exactly copyright friendly… but I think we can probably get away with fair use as an arts program for kids. You can see all of those here.

In the summer we led a virtual summer camp on Zoom. One of the workshops Rubin led was Sing a Song. In this workshop kids collaborated on songs and recorded them over zoom.

N.MC: What has programming for KidsArts looked like during the pandemic? Was Brave Spaces recorded remotely?

MD: Our programming has evolved into a lot of forms over the course of the pandemic. We are all about adapting, getting feedback, being flexible, and doing our best to offer things that really work for our families and the artists we employ. In the spring we started by offering virtual activities that kids and families could access on our website. In the summer we ran a virtual summer camp and ran outdoor community art workshops which continued into the fall. Starting in January we began hosting a very small cohort of kids as they complete their virtual school. In between classes and assignments we help get them off screens, making art, being creative, and playing outdoors. We’ve also been continuing our outdoor workshops through the winter every Tuesday–Thursday from 2–5pm. So far we have done paper rockets and flying cars, snow murals, nature photography, and more!

N.MC: What do you consider the importance of introducing kids to music/giving them a creative musical space?

MD: So much music instruction for kids in elementary school is about learning instruments and skill development. This works for some kids but it can really turn others off to music at an early age. We always try to make our music activities super creative and accessible to every kid. Kids are brimming with the wildest, deepest, silliest, most poignant ideas. Our thing is about making containers that kids can fill with their creativity, that make kids feel brave enough to try new things and collaborate with each other, and that teach that doing your weird/tender/silly/far out/unique thing loud and proud is super cool and valid in art and music.

We are also super lucky to have active creative musicians on our staff that kids can learn from. Rubin plays in the band Queen Crony, Scott plays with the band Old Wave, and I make music as Kevin Wynd. We’re all pretty involved in the creative music scene in Boston and we bring that with us when we work with our kids.

N.MC: Any particular stories from making the album that stand out? Any favorite tracks?

MD: Wow, that’s a tough one, because honestly I really like all of them. For me, some tracks that stick out are “Life on Mars,” “Magic is SO Unfair,” and “My Silly Man.”

Check the lyrics to Life on Mars: “life on Mars is unbearably cold / so cold people look into space / they dream of going to old earth / to visit the old human race.” I wish I wrote lyrics like that… [Editor: Agreed, these lyrics are devastatingly good.]

“Magic is SO Unfair” was the first song I did for You Write it, I Sing it. It was mid-March and everything was so uncertain and scary. I worked honestly way too hard on it (probably did 20 takes of the guitar solo hahaha) but it gave me something positive to do which helped me get through.

“My Silly Man” from Making the Band was done in person. Right when we started recording our singer burst into tears because she was really nervous! She ended up playing melodica on the song which turned out really beautiful. To me it sounded like the band Storm and Stress which was a nice surprise!

N.MC: Anything else you want to mention?

DM: I’m really proud that KidsArts has been able to continue employing our artists-as-teachers through the pandemic despite a significant reduction in the amount of programming that we have been able to offer. A purchase of Brave Spaces helps us continue to pay our artists and work toward improving our COVID safety measures moving forward.

We are also in the midst of planning a super fun outdoor summer camp in JP and anyone with kids ages 5–11 that is interested should email [email protected] to learn more!

Devon Williams – Out of Time

Los Angeles-based singer/songwriter Devon Williams released Out of Time in March 2021 as a companion EP to last year’s album, A Tear…