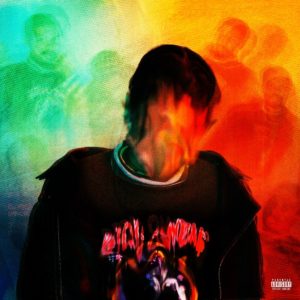 There is a spectral moodiness entrenched in JORD4NEVERDIED’s music that makes you feel like you’re six Henny shots deep at a house party. You may find yourself having a good time, but there’s always that looming possibility of the night turning fuzzy and distorted. It’s the type of music that mimics the point in the party where you find yourself on the couch, and your mind starts racing between thoughts about one-night hookups, salty relationships, and backstabbing morons.

The Boston native’s sound falls somewhere between The-Dream’s astral inflections and The Weeknd’s soaring apparition. His new EP Blur is atmospherically dense, sweaty, and jam-packed; basically everything you’d expect just by gazing at the project’s artwork. The entire presentation is fitting for JORD4N’s aesthetic. Colors blend together like some demonic rainbow, and clarity is only found through blunt smoke. His voice, while mercurial and supernatural, never lends itself to one tempo or frame of mind. His knack for writing melodic hooks on beats of differing pace is evident throughout.

In one avenue, there’s the spiteful, love-torn agitation found on “Again,” while in another lane, we have the lustful complexion found on “Slowly.” Both songs illustrate JORD4N’s innate ability to capture a vibe on opposite sides of the emotional spectrum. He credits his songwriting talent to inspirations like Kid Cudi, Childish Gambino, Juice WRLD, and most fittingly, The-Dream. “It really depends on what vibe I’m feeling at the time,” JORD4N told me, with regards to how he approaches each song. “Most of the songs on the project I recorded as soon as I heard the beat.”

For a seven-song project that sits under 15 minutes, JORD4N effectively slithers between topics about growing as a human being, and staying cautiously aware of those who straddle the thin line between real vs. fake. “I remember late night starving trying to figure out a meal,” he solemnly raps on the project’s interlude. The beat sounds like a car speeding around a chaotic racetrack, while JORD4N projects a dichotomy that a lot of us deal with on a day-to-day basis. “Over the years, I learned to not take anything to heart, and keep moving forward even if things don’t go the way I thought they would,” the Boston native said, when it comes to differentiating between those who actually care about you, and those who don’t. The track is a good narrative appetizer for what’s to come in his future artistic vision

The EP offers a sensual intimacy on other songs. “Conclusions” is the type of nocturnal romancing that The Mxxnlight has been experimenting with on some of Wiz Khalifa’s albums. “WYD” functions as the high point in an alcohol-fused night; the big dance before the blurriness starts to seep in, if you will. “Seen you at the party, what you doing?/”Baby, don’t go home, ’cause we ain’t dance enough,” he raps with a glowing, pleading charm.

The overall spirit of the EP could fit inside a red-lit room, but every once-in-awhile, JORD4N’s sound and songwriting will beam with a vibrant energy. Nowhere is this more apparent than on “Right Now,” the bubbling single with Starchild Kayla. The production exudes a perky effervescence, and the vibe is as euphoric as it’s ever been. The 808s, like on most tracks, fizzle within your mind until the room is drenched in atmosphere.

Throughout Blur, JORD4N sounds as if he’s giving us in-the-moment raw emotion. It’s the type of msuic that comes and goes, making you wonder what else he has in store as a producer and songwriter. That’s what makes a debut project like this so effective though. Leave just enough room for listeners wanting more.

“I’m just trying to keep getting better and experiment with my sound,” he said. “I want to build a strong fan base and be in good position to help my family/friends out with whatever they need.” He also wants a hit song produced solely by his hands. Based on his firm grasp of mood and setting, I think that hit will come soon enough.