Many of us here at the Film Flam get a particular kick out of getting spooked, as I’m sure some of you do. All of us have strong feelings about horror films—either we love them or we can’t stand them. Something about the adrenaline in the artifice reads as real. Personally, my reaction is to cackle all the way through them—the more I laugh the better the scares, the better the film. I didn’t always feel this way. Big props to Jonathan Demme for making The Silence of the Lambs, a film so enthralling I switched back and forth between channels to watch it as a frightened 13-year-old. It takes a very special film to balance fear, mystery, and fun as expertly as this one does. In fact, you don’t need me to tell you that the genre of horror has not seen many greats in the last couple years.

It is with sick pleasure that I can happily announce that It Follows, the newest release from David Robert Mitchell, is one of only a handful of films in which my laughter ruined the experience for my fellow theatregoers. I’m not the only one to notice this Michigan-born filmmaker and writer’s quick rise to notoriety. It Follows is only Mitchell’s second major release, and (like its predecessor The Myth of the American Sleepover) it paints an elegant portrait of Metro-Detroit suburbia in beautiful widescreen. Only this time, it’s a horror film. A beautiful one.

What is It?
On its surface level, It Follows is your standard metaphor for the dangers of sex. Jay (Maika Monroe), a young woman, sleeps with the wrong guy and a supernatural entity begins doggedly pursuing her. The catch? It’s a shape-shifter and can take any form (whatever gets It closer to you). You can only see It if you have It. It doesn’t speak. It doesn’t sleep. Wherever you are, It is walking toward you (though It’s not capable of running). When It gets you, It doesn’t let go. Even better, once It finishes with you (it won’t be pretty), It goes back to the person who gave It to you. The only way to get rid of It is to give It to someone else. Would you?

Appearing as everything from a naked old man to a disheveled prostitute urinating as she approaches our protagonist, It can truly inspire nightmares. You’ll be looking over your shoulders and scanning the crowd after this flick! Or, if you’re like me, you’ll be thinking about the implications of this Big Baddie choice. In a way, Mitchell’s creature takes David Lynch‘s practice of disfiguring physical beauty into something repulsive and ramps it up a notch. Almost all of It’s forms sport some kind of nudity or suggestion of the physical body that will make you never want to touch another person again. Perfect. 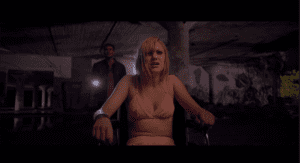 Why Does It Walk?
Perhaps the best part of this creature, and the movie as a whole, is the glacial pace at which It approaches both our heroine and the audience. It Follows gets most of its scares in periods of calm where for even a minute the cast, all college-age with an almost Charlie Brown absence of parental figures, do what teens do best: nothing. There’s lots of sitting on couches, watching TV, joking around, hands nervously almost touching other hands, and so on. We’re lulled into a sense of security, the feeling of immortality and unlimited time that all young people have, and then all of a sudden danger rears its ugly head.

Is this anything new? No. Long have we known that the true terror is not in the confrontation but in the calm before the storm. It’s excellent to see Mitchell employ this in what is truly a minimalist film. If I’m not mistaken, It occupies screen time for less than a third of the film. You’ll be sitting at the edge of your seats wondering when It will show up, even on second viewings. Hats off to Mitchell for capturing this feeling in his original screenplay. 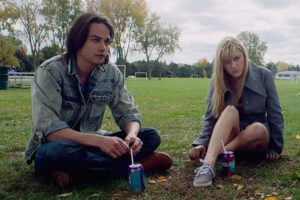 It Settles the Score
Complementing the pacing of the narrative, It Follows comes equipped with a haunting electronic score by Rich Vreeland (better known as Disasterpeace) that creeps up on you and holds you fast. Most tracks start off small and ambient before breaking into quick, grating, and pulsing beats that will make your heart beat and your head nod. And then they stop, gone almost as quickly as they appear. If you’re looking for an idea of what to expect here (and haven’t Googled it yet), think John Carpenter, think Tubular Bells, add a lot of synth, and get excited. Yes, I can assure you that the film is worth watching for the soundtrack alone (I listened to it three times in a row while commuting yesterday). For a film about the suburban experience, an entirely electronic score might seem like a strange choice. Especially given that it’s supposed to be a beautiful horror movie. But its synchronicity with the narrative pace is self-justifying.

It Has Its Problems
If nothing else, the film is an incredibly successful experiment by an up-and-coming virtuoso, but it’s not above critique.

One, the film has received some criticism from sex-positive voices for trivializing sexuality. Indeed, the film punishes its protagonist, ultimately a normal person, for simply wanting to have sex—the attached societal stigmas for which may not need reinforcing. On the other hand, the desperate choices that the protagonist makes when not being pursued may be the most darkly memorable moments in the film and might not have hit so hard with less traditional messaging. (One such instance, in particular, I believe to be the most frightening scene in the film.)

Two, the story suffers from a few plot inconsistencies, including a pool scene straight out of the teenage mind-set and an ending soon after that doesn’t quite give you what you want (although on this latter point, I concede that with this kind of story an open ending is necessary). This is forgivable and more than countered by the attention to the little details that litter the film.

Three, there are very few people of color represented in the film. The film is set in Detroit, though most scenes occur in the nearby suburbs (with a few going “across the line” to neighborhoods the kids have been told to stay away from). Still, the absence is notable and hopefully an artistic choice, though perhaps one that was not needed in this film. Or maybe it’s just worth noting that endemic racism exists in this country, especially in cities like Detroit.

Four, the film is a little too familiar. What I mean is that the film’s aesthetic is such that it reminds you that it’s not real. It seems as though the film is meant to capture a sort of realism that, when portrayed, seems overly stylized (for example, shots of the “lazy” character covered in junk food or asleep in awkward positions). This effect is even more palpable when combined with the energetic score. This almost Brechtian experience is traditionally meant to detach a viewer so that he or she will consider the thematic interpretations of the film. If the theme of this film is more than “practice safe sex,” I’m not sure this film is an effective thematic vehicle. At the very least, I believe It Follows clutters its ideas, and its thesis is muddled in the process.

Will I See It?
If you’re asking yourself this question, my strong suggestion is: Yes! Better yet, see it at the Coolidge and support our local independent theatres. All critique aside, It Follows is one hell of a ride. The acting is exquisite and the scares are good. I hope that filmmakers continue to be as inventive and focused on imagery as Mitchell is in this film. I expect Mitchell to continue to make innovative choices. For some of you, the innovative choice that is this movie may ruin your sex life. At least for a day or two. But, like, worth it.