New England’s burgeoning music scene is due in large part to congeries of Massachusetts collectives and groups that help push it forward. From Brockton’s Van Buren Records, to Roxbury’s Shooterz Muzik, to Feed the Family (and many, many others), the scene is ripe with talented ensembles.

With 2022 almost halfway through, another creative consortium has arisen-this time stretching beyond the confines of the Eastern Mass. sea border. CLUB INDGO, a seven-member label from New England, has surfaced as an irrepressible aggregate with aspirations of finding power in collaboration.

Inklings of this consortium first materialized on my Instagram timeline back in February with a vague prefatory post of photographer, creative consultant, and executive producer Dalvin Lopes, as well as a caption from Lopes that read in all caps, “LET’S GET THIS SHIT.”

Since then, CLUB INDGO has spent much of the past few months teasing the label and introducing the group of artists, many of whom should be familiar for those who follow the scene. As of this moment, the label consists of Boston’s sprightly supergroup ILL ADDICTS-including songwriter/producer ProSwervez, ALI (songwriter), Juelz (songwriter), Dochee (songwriter)-as well as Rhode Island songstress Sança, in-house producer Buu and Lopes.

The concoction of talent makes sense, especially given the fact that these artists have collaborated in the past. Their chemistry was evident after ILL ADDICTS called upon Sança’s luscious vocals for two groovy tracks on the group’s mid-2020 album, Beautiful, (“Don’t Know Why” and “California”), another on their late-2020 album Foundation (“Dancin'”), and one more with the screwed-up funk of “SWISHAHOUSE.” These studio sessions, many of which were done in Sança’s loft, conjured a match made in heaven and created the footprint for CLUB INDGO to be born.

“It all sort of happened very naturally,” the group said in a collective statement to me over email. “We found ourselves collaborating often and loving everything that we came up with. We all share a bond through our creative process and expressivity and we motivate each other in a way that propels us forward.” 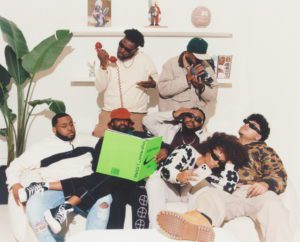 Combining Sança’s  graceful soul with ILL ADDICT’s euphonious vibrancy became a successful formula, as tracks like Sança’s 2021 single “So Much Better” (with Erykah Badu-sampling production from ProSwervez) proved to be a mellifluent portal into serenity.

“The moment we decided to take the leap was pivotal – we started understanding what we were creating and what actually worked for us,” the group said. “We didn’t leave any space for doubt and understood that the creativity and skillset we have are much bigger than any one of us individually. And most importantly, we be turning’ the fuck up!”

On May 11, CLUB INDGO released their first single as a consortium titled, “Are You in the Room.” The song’s rhythmic whimsy, thanks to a stimulating groove courtesy of ProSwervez (the producer of the track), marinates in nebulous opulence, as Sança and Pro offer their own perspectives on the pursuit for “the one.” Sança careens off the beat with her usual soothing cadence, perusing the room as if she’s looking for the Great Gatsby (“Lately I look for you/Baby I scale the room/Maybe you left/Or maybe this is our last debut”). Pro, meanwhile, sets his sights on the exposition with balcony-ready bars and HOV-inspired pastiche (“Fuck Jet Blue I’m as fly as it gets/Fuck paying dues bitch I’m buying the Nets/Fuck paying school shit I’m tryna invest”).

The song effectively adds to the already impressive canon of tracks from these two artists, and shows how effortlessly they can shift from vibrant house music, to suave R&B, to easygoing rap. As the group puts it in their press email, “imagine Diana Ross left Motown for Bad Boy Records.”

For CLUB INDGO as a whole, the sky is the limit when it comes to what they feel they can accomplish. “Our main goal is to make CLUB INDGO a worldwide name and bring an art form that’s unseen and unheard of that pushes the boundaries of the normal click-y shit,” they said. “We’re not trying to be anyone but ourselves, and it’s gonna show within everything we release.”

On the creative side of things, the group has learned how meticulously passionate they are about everything they do together.  The group ran through over 20 different versions of logos and designs before landing on a few that really resonated with the vibe of the label. And although the label itself is still novel, each of the individual experiences continue to be important pieces to the broad puzzle.

“As far as production, we’re used to using an in-house approach to getting
things done, but we’ve learned that with the emergence of this club we really want to branch out and collaborate with more similarly-minded creatives,” the group added. “Each individual member pulls from different pools of experiences that compliment one another. We’ve all discovered how multifaceted we are in each other’s presence when creating. Our goal in these coming months is to expand our knowledge on the creative and business side of things, for instance- learning about marketing has been extremely tedious but we’ve come to understand how fruitful it’s been for us.”

CLUB INDGO continues a string of collectives looking to bring visibility to a growing  New England music scene. As we enter the summer months, the seven-member collective will continue to learn and bring positivity through each other’s creative strengths.

“With so many different avenues we want to attack, it’s all a matter of taking our time to do it the right way while also sticking to our standard of quality,” the group said. “There’s a lot of genre-defying music in the vault right now from all parties and we can’t wait to surpass even our own expectations. The more we continue the more exciting we’ve found it’s been. We’ve had the time to sit with the music and let it age to see if it holds up well, and it certainly has. So just expect a bunch of dope shit after dope shit.”

Listen to “Are You in the Room” below and prepare yourself for CLUB INDGO’s bright future.