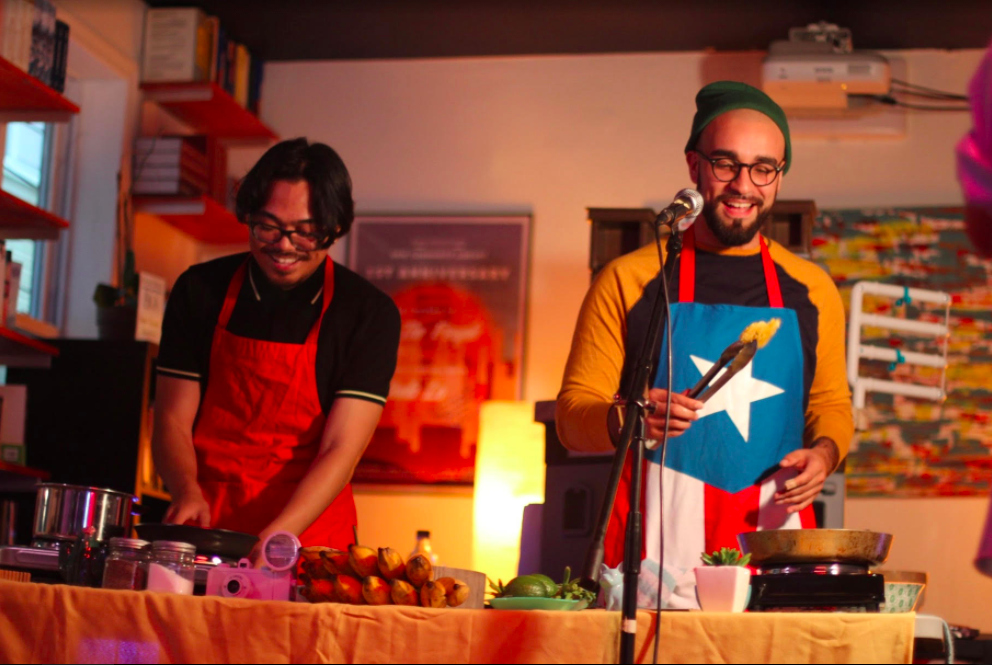 My fathers story is set in the memories he is forgetting/ and the mountains he grew up in/
If you were to step into his childhood home/ you’d see those memories scatter when the lights turned on.
– far, far away
Becoming an Island, Anthony Febo

An island of poems can bear many fruit. Grief and joy and passion and romance sit atop coconut trees, waiting to fall into the hands of readers who seek refuge from wading in the ocean. The journey to compile enough experiences in order to write an island of poetry takes time. For Anthony Febo, it was over the span of a decade in which his debut chapbook, “Becoming An Island” was crafted. The Lowell native, who moved to Puerto Rico with his family for a short time as a child, develops a place for his own healing in this book. One that includes space for his father, who lost his battle to dementia during the pandemic. His work apart of Adobofishsauce, provides intentional community with longtime friend and creative Ricky Orng. The duo artist project practices discovery and self preservation through spoken word and their relationship with food, culture, and heartbreak. When we sat down at his house in Malden, he shared with me where the idea for becoming an island came from, what’s moved him recently and why AdoboFishSauce is so necessary in today’s climate.

Durane West: How did you come up with the title “Becoming an Island?”

Anthony Febo: So the title came from the last line in the “tonight I’m cooking” poem which was “tonight I will be an island” and that’s what I originally wanted the book to be called. It’s this idea of creating an island within myself. When that person on the train was like “English please” while I was giving directions in Spanish, that night I got home cooked and some Puerto Rican ass food. You know what I mean? Just like the idea of being able to get in touch with this thing that is distant, but still very much a part of me. Trying to honor Puerto Rico however I can.

DW: What is moving you right now?

AF: shout out to my pops. I think his way of existing in the world was something that I rejected for a very long time. And now that I think about it, I ended up being exactly the same way. He was very charismatic, and always trying to talk to people. And I’m like, not everyone wants to talk to you, dawg. And now that I think about it, it was less about him believing that people wanted to talk to him. And more of just, let me just add this small little thing to the day, and maybe you’ll remember it, maybe you won’t.

I think about breath. And like coming back to it in terms of not just something that literally keeps us alive. But more something that can help ground me in the moments where I feel like I’m out of breath, where things that are happening around me make me feel breathless. Being able to just hold up and being aware of when and where to take a nice deep breath being intentional.

DW: What would you attribute to be the foundation of this book?

AF: When I wrote the poems, I don’t think I was thinking about it as much as I was reacting to what’s happening to me. These are the things that I’m thinking about, in general so I’m just writing it, you know. When it was time to put the book together, the poems were already already there. I wasn’t necessarily thinking about how do I write towards this book. But when choosing the poems for the book, I wanted to make sure that there was a bit of a journey that is happening, both in terms of what I am going through in my own growth and development. Also thinking about the relationship with my pops, so the book is broken up into two sections.

DW: What questions were you asking yourself as you were editing this book?

AF: It took me two, maybe three years once GameOver books was like, we would like to print the book of yours. The poems were already written. It was just a matter of organizing because I couldn’t grasp the idea of me not being there to perform the poems. I’m a writer, but like, I write so that I have something to perform. Yeah so that took a while. That’s where the idea of “Becoming An Island” came from. In a way, the poems themselves are a bit of an island.

In one of the intros I talk about anyone that comes to this island chooses it, and I am both talking about coming to Puerto Rico and choosing to be there, but also coming to this islands of poems. No one’s gonna pick up and read my whole book and be like, oops, I didn’t mean to, you know, there’s an intentional choice to consume the poems. And so if you are intentionally choosing to be here, then there’s already a level of love that I’m appreciating and that I can like let go of, and then I don’t have to control everything.

DW: What are your favorite types of poetic devices?

AF: I love personification. Toy story is my shit. I like the idea of thinking that toys not only can talk but have their own world and backstory. I love that. I enjoy repetition. Repetition done with a performative aspect. I really enjoy metaphors, list poems anything that gives myself a structure that then allows me to understand the ending which is kind of baked into the structure itself. It allows me to have a lot of fun getting there and I don’t have to worry about what my ending looks like, I can just focus on getting to the ending that I know is already there in a way that speaks to me.

DW: what is the intention of AdoboFishSauce ?

AF: So we fuse cooking and poetry, food and poetry for a multi sensory experience. We combine vulnerability, laughter, and joy with activating experiences of chopping, eating, the sound of the sizzling, smell of the food. Regardless of who you are, where you come from, what you believe in everyone has to eat. So it’s an opportunity for everyone to get at the table to whether you care about poetry or not. We understand the value of being cooked for and cooking for someone so we wanted normalize this active practice of intentional living.

DW: Why do you believe Adobofishsauce is so important in these times?

AF: As much as we are performers, poets and writers, we’re also educators and youth workers. So when we get a chance to run a workshop or facilitate something we feel very alive. Being able to run a workshop where everyone present chooses to be there and we’re doing some weird theater poetry, with introspection. We love getting folks to realize that poetry is so much more than the written word. That it’s all around us. We don’t teach craft, we help expand the way that you think, to accept and find ways to recognize the things that are already in your life. Show love to those things, give breath, and then have that come into your writing. The way that poetry allows us to make connections with feelings and different thoughts in terms of metaphors, personal experience or whatever it is, we know can do that with food as well. So that what we try to do more than anything. 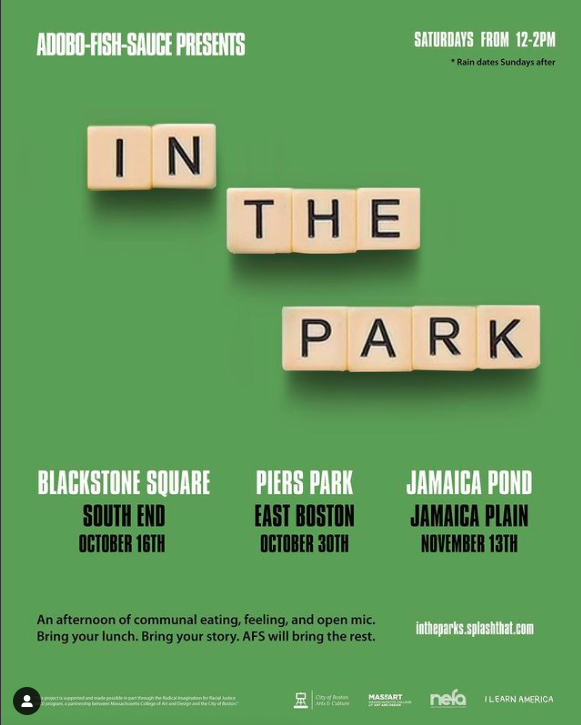 Jibade-Khalil Huffman Examines Blackness in Relation to Pop Culture and Media With His Latest...

A Review of "Now That I Can Dance," Huffman's Newest Gallery at Tufts University Art Gallery

An Interview with the Spoken Word Poet Behind 'Human Verses'