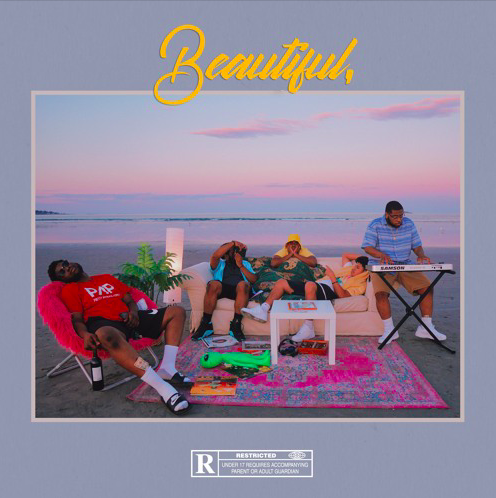 Due to its inherent weightiness, the term “beautiful” can take on many forms in life. It’s difficult to truly embody this macrocosm because most human beings carry a different perspective on it. For me, something “beautiful” can be discovered from a feeling or a sight, maybe even a taste or smell. I suppose in theory, the entire concept is analyzed through our natural senses. The difference lies in who or what is involved, and how someone personally views it. Sometimes beauty comes in the form of something pure and organic-a healthy relationship, or an artifact that has emotional meaning to it-while other times it can be used as a shield for manipulative commercialism (Adam Sandler in Uncut Gems).

For Boston rap supergroup Ill Addicts, the term “beautiful” became the ultimate centerpiece for their official debut album. The friends officially met on a school trip and found that each had a passion for music. When I hit them up on Instagram, the enthusiastic posse collectively agreed on their unconventional vision-“The main thing that drove us was the word beautiful. How can we literally embody that word in all aspects such as, video, content, art and sound?”

Since each member brings something different to the table, putting them in an artistic box is noticeably difficult; which is exactly what they want. They’re projects are deceivingly unpredictable, making much of what they do all the more exciting. Beautiful, is noticeably different from their distressingly murky EP Malfunction from this past March. The synths are vibrant and nostalgic, while many of the songs’ drums bask in the rhythmic grooves of dancehall-a style that influenced Proswervez for this album.

The tone of Beautiful, constitutes a party-like essence with subtle odes to 80s and 90s west coast grooves, a lane Larry June normally operates in. The difference lies in the pace and energy. Whereas June maintains a calm and collective persona, Ill Addicts never hesitate to flaunt their eccentricities. The nifty disco-inspired “Coke” transports listeners into a woozy séance that both satirizes the 1980s culture, and highlights it in all its musical flamboyance (“I just want you right next to me/She just want to sniff Stephanie/This right here is telepathy”).

The group succeeds in balancing irony with wit; love lost and love found. The choruses on “Queso” and “Sleep Better” are sharply quintessential as far as written choruses go. The former bathes in a first class dinner party while the latter chronicles a love that can’t fully be grasped (“I sleep better when you’re not on my mind, cause you’re so fine”). Keys shimmer above the surface of a moonlit lake, while Spanish guitars quiver inside a beachfront restaurant.

Their awareness of setting is uncanny. It doesn’t matter how the group approaches a song. The landscape is as vast as the ocean. “F3miii’s Interlude” is a gorgeous acoustic-laden U-Turn into love’s true pinnacle. Regardless of romantic cynics (I tend to be one sometimes), I can’t help but think of this as the album’s centerpiece. To me, the track epitomizes the most important element of beauty in their eyes. A life of perpetual happiness with someone you love, no matter how difficult life can seem. The bare production genetically makes it a standout song. It’s raw and unapologetically genuine. In a nutshell, it represents the aforementioned versatility riddled throughout each artist.

Beautiful, is an album that can easily swallow the listener into a world of boundless movement and tasteful nostalgia. “All Black 328” for example reminds me of hip hop’s early underground parties where DJs would hype the crowd up with feel good chants and funky break beats. Something like this can’t sound derivative because Ill Addicts won’t allow it too. They’re too elastic and unique in their own way. Underneath the debauchery is something wholly extravagant and necessary. Because without beauty-or at the very least a perspective on it-the world would lose its character.