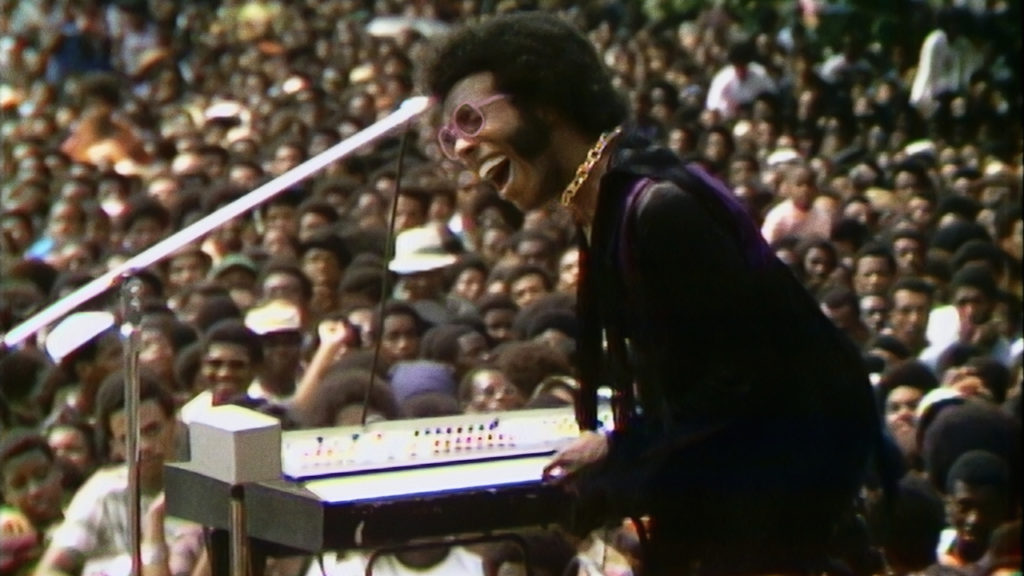 The problem with Woodstock is that it’s Woodstock.

This is, of course, no knock against the festival itself, or the musicians that played there, or the thousands of muddy hippies who attended and had their third eyes opened. It’s just that, like so many other touchstones of the 1960s’ counterculture, it’s been so thoroughly rehashed and mythologized and beaten into the ground that it’s difficult for someone my age to approach it on its own terms. Take, for example, Jimi Hendrix’s feedback-drenched rendition of “The Star-Spangled Banner.” It’s a brilliant, anarchic performance by a truly unique (and legitimately weird) artist, but because it’s been so thoroughly enshrined in the beatification of Jimi Hendrix, Guitar God, it’s difficult to feel anything while watching it– at least, anything more than one might feel walking through the marble Greek sculptures at the MFA. Make no mistake, Woodstock was a watershed cultural moment, but it will likely be a few generations at least before we’ll be able to look at it with unblinkered eyes.

All of which makes Summer of Soul, the feature debut from director Ahmir Thompson and the opening night selection of this year’s virtual IFFBoston, all the more revelatory. The spectacle and performances on display are just as epochal as those on Yasgur’s farm, and the moment it represents is just as important (and, in a few key ways, perhaps moreso). But because it’s spent the past fifty years moldering away in boxes of unseen tapes rather than trotted out for every sign-of-the-times historical montage, we are able to feel its power firsthand.

Summer of Soul documents the Harlem Cultural Festival, a series of free musical festivals held in New York’s Morris Park over the summer of 1969. Produced and MC’d by nightclub singer Tony Lawrence, the concerts featured a veritable who’s-who of (mostly) African American stars of the 1960s, from Stevie Wonder and B.B. King to Moms Mabley and Reverend Jesse Jackson. Thompson tells the story of the festival with a propulsive mix of interviews (with performers and attendees alike) and contemporary archival clips, which help contextualize the performances within the national upheaval of the era– along with a veritable treasure trove previously unreleased performance footage.

It is this footage, of course, which is the principal selling point of Summer of Soul, and it should go without saying that it absolutely delivers. Simply put, this film contains some of the greatest performers and recording artists of the twentieth century, performing some of the best music ever written on the North American continent. The highlights are too many to list: Sly Stone commanding the crowd like a revival-house preacher from outer space; Nina Simone performing “To Be Young, Gifted and Black” with all the weight and reverence of an alternative national anthem; Jesse Jackson emotionally recounting the assassination of Martin Luther King, followed by a duet of King’s favorite hymn by Mavis Staples and Mahalia Jackson. The lineup is every bit as astonishing as those of Woodstock or Monterey Pop, with each performer completely living up to Lawrence’s breathless introductions. Unlike many other seminal concert films, the footage here isn’t terribly flamboyant in terms of cinematic technique– it was shot in academy ratio on TV-grade video tape, with none of the lysergic editing tricks in vogue at the time– but it doesn’t need to be. The performances are the star, and they are uniformly riveting. 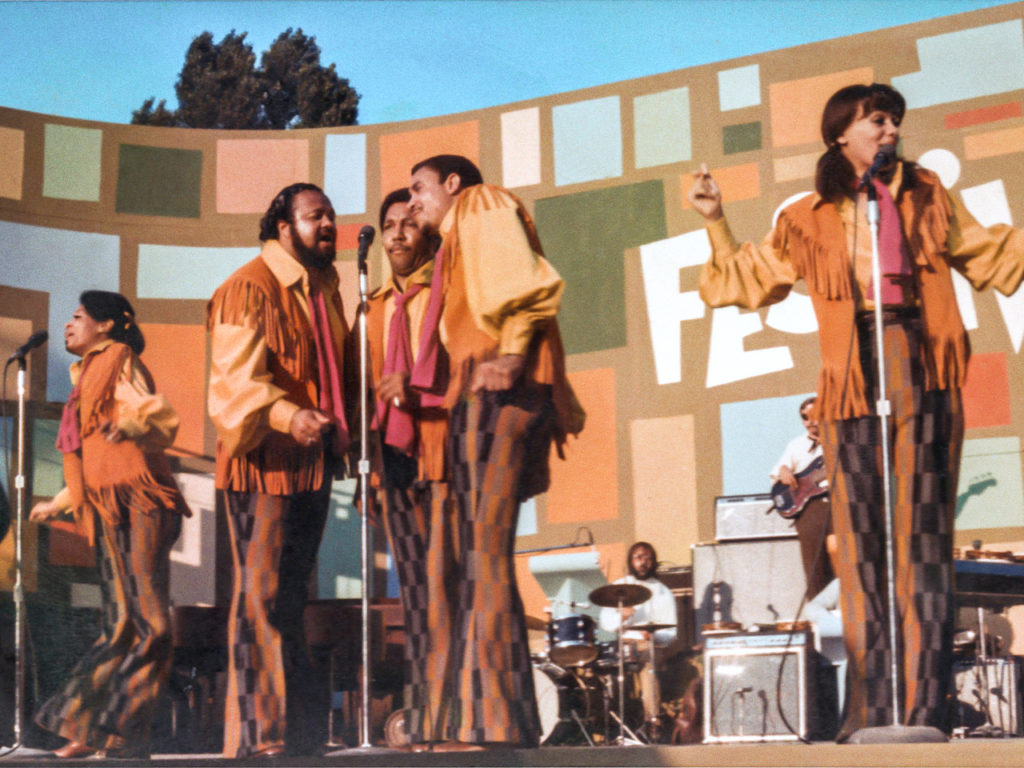 The Fifth Dimension performing at the Harlem Cultural Festival in 1969, featured in the documentary SUMMER OF SOUL. Photo Courtesy of Searchlight Pictures. © 2021 20th Century Studios All Rights Reserved

It’s no surprise that Thompson understands how to present these musical performances: he is, of course, better known to the world as Questlove, drummer for the Roots, bandleader on Jimmy Fallon’s Tonight Show, and all-around goodwill ambassador of hip hop. More surprising, perhaps, is his innate grasp of documentary storytelling. Editing his footage with a decidedly musical rhythm, Thompson expertly conveys not only how great these concerts were, but what they meant. The late ‘60s were a time of social upheaval everywhere, but particularly in Black America. The conventional baby boomer chronology paints the summer of ‘69 as the height of flower-power idealism, but by this point much of the shine had already worn off for certain segments of the population: King and Malcolm X were dead (with Fred Hampton soon to follow), Huey P. Newton was in jail, and the FBI was doing its damnedest to eradicate the Black Panthers and other civil rights groups by any means necessary. But for those few months, those who converged in Morris Park got a taste of the hope and pure, communal joy that we associate with the Summer of Love. In some of the film’s most powerful moments, Thompson trains his cameras on attendees as they watch footage of the festival for the first time in half a century. At one point, Fifth Dimension singer Marilyn McCoo is moved to tears as she watches herself and her friends singing and dancing at the height of their powers. Later, a man who attended the concerts as a young boy is overcome with emotion: “It really happened! I’m not crazy!”

Of course, he can be forgiven for being convinced he imagined it. In a damning sign of the times, filmmaker Hal Tulchin, who produced the footage, couldn’t find a single distributor willing to release it, even as he attempted to tap into the zeitgeist by selling it as “The Black Woodstock.” It’s a bitter reminder that mass-marketed idealism is still often penned in by the boundaries of social constructs and “acceptability.” This is not, by any stretch, challenging or inaccessible music, so it’s depressingly simple to imagine why a film featuring monster-selling hits by Gladys Knight and the Pips or Temptations frontman David Ruffin would be deemed “unmarketable.” And so, while similar concerts were enshrined in our shared cultural memory, the Harlem Cultural Festival was relegated to a footnote.

Honestly, if there’s a flaw to Summer of Soul, it’s that it’s only two hours. It would obviously be impractical to release a concert film of the entire festival– it was, after all, a series of five concerts, each of which spanned from early afternoon into the evening– but there’s just so much great music that it’s occasionally frustrating that we don’t get to see more complete performances. The bigger names, of course, are given room to breathe– one simply does not cut off a nineteen-year-old Stevie Wonder– but other notables, like the legendary avant-jazz guitarist Sonny Sharrock, are relegated to brief excerpts. Summer of Soul is slated to be released this summer via Hulu, and while it is a blessing that this film will be available for millions to watch, I hope its home on the streaming giant does not preclude an expansive, extras-laden blu-ray set. It is impossible to watch Summer of Soul and not want more.

But, of course, that can’t help but feel a little greedy when we could have just as easily continued to not see it at all. It really can’t be overstated what a miracle this film feels like: a Woodstock-caliber concert which we are able to view without Woodstock-caliber baggage, and a document of Black expression and community which arrives precisely at the moment when we, as a country, need it most. But even if you were to somehow strip it of its context and significance (which is, of course, neither advisable nor possible), you’d still be left with an outstanding document of incredible music. Summer of Soul is nothing short of a revelation, and like a favorite album, I can’t wait to put it on again.

Summer of Soul (…Or, When the Revolution Could Not Be Televised)
2021
dir. Ahmir “Questlove” Thompson
117 min.