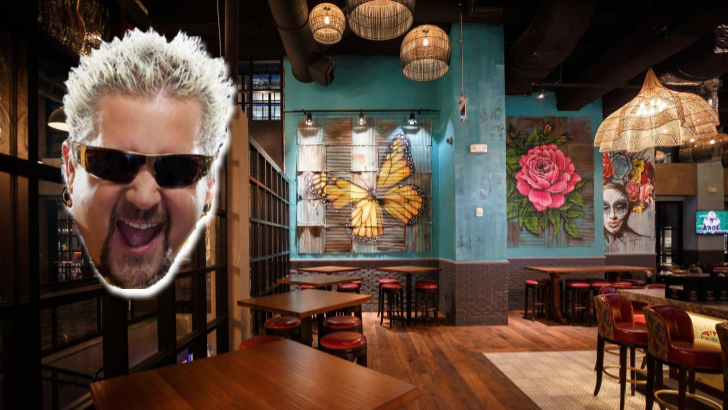 With his bleached, spiked hair; penchant for mirrored sunglasses and heavy chain necklaces; dedication to leather jackets and flame shirts; and exorbitant personality as brash as his food, he’s a cartoon character.

There are very few living memes, and he is one of them.

That’s why standing in front of Fieri’s newly opened Tequila Cocina next to TD Garden didn’t feel real. It wasn’t quite an out-of-body experience, but it was nonetheless surreal, like how I imagine it would feel going to Vegas for the first time.

After seeing him visit local digs on Diners, Drive-Ins and Dives; watching him eat chicken wings on Hot Ones; and pouring over long-form articles about him until my eyes bled, I was about to have my first Fieri restaurant experience.

I didn’t know what to expect. Sure, his famously mocked Times Square restaurant, Guy’s American Kitchen and Bar, opened in 2012 and shuttered in 2018. But someone at his level of fame has to know something about cooking and restaurants, right? Fieri’s a skilled chef, but not all his franchises have found success. Do people even come to his spots for food? Or do they come for Fieri? 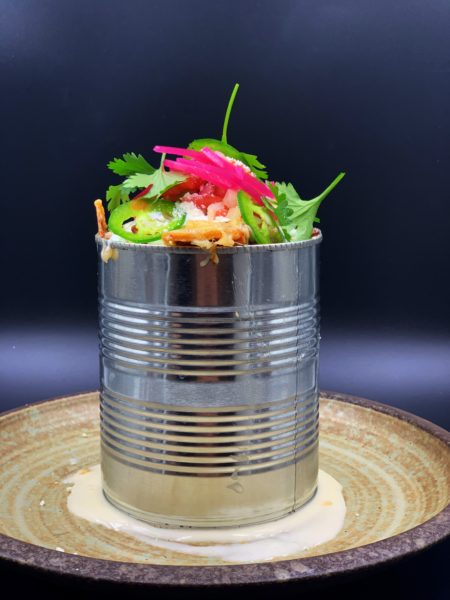 TD Garden is a place I rarely visit, and making the trek there felt like going to an airport. Fieri’s restaurant is in the Hub on Causeway development and is part of Big Night Entertainment Group’s new flagship Big Night Live venue. Operated by executive chef Rachel Klein, the restaurant was dimly lit with a warm golden glow, though in Fieri’s signature bombastic style, the walls are tattooed with colorful paintings of butterflies, roses, and sugar skulls by muralist Dirty Dek.

We didn’t go overboard with the food, instead just getting beers and starting off with Trash Can Nachos. I was immediately drawn to the dish—as a trash person, it seemed fitting.

But why are these nachos confined to a can?

He continued: “But there are so many bad nachos out there … not enough toppings, too much goop on like three chips and 1,000 bare ones. … My goal was to create a technique in the restaurant like I would make them at home. It’s a layering process where every chip gets its own love and is stacked up in a metal can for the perfect tower. One time I was making a giant version of them at the South Beach Wine and Food Festival and the biggest vessel I could find was a metal trash can. The rest is history.”

“I saw those on TV,” I heard someone say as our server brought out a silver metal can on a plate. They placed the plate on the table and slowly lifted the can, unveiling a stack of nachos, borracho beans, SMC (super melty cheese), chorizo, cotija, cilantro, jalapeno, and crema. I stared at it for a few seconds, seeing if it would budge, if any nachos would start sliding away. But it didn’t, and we dug in. The chips were smaller than expected and crumbled under the weight of the toppings—maybe if the can was wider in circumference…

The nachos could have used some more spice, while the tacos—I got one chicken and one cauliflower—were nicely sized and seasoned, with salsa roja, pico de gallo, and cotija, but arrived at room temperature. Of the two I sampled, the cauliflower taco with verduras, cotija, and thyme packed much more flavor.

Boston’s Latin American food scene is notable, with authentic spots like Chilacates and El Pelon Taqueria, as well as some not-so-traditional joints, but is also lacking in some respects. Fieri says he saw an opportunity to meld Mexcian food and nightlife with Tequila Cocina.

“Having grown up in California, I’m a huge Mexican food fan,” he told DigBoston. “While there is definitely some good Mexican in the Boston area, I think there’s room for more.

“Plus, we wanted to create a good party spot there at Big Night Live. A shot of Santo Blanco and an al pastor taco … sounds like a party to me.”

Olivia Deng is a Boston University Graduate and journalist living in the Boston area and has written for publications including The Atlantic, Huffpost, and Spare Change News

OLD TOWN ROUTE: HOW TO HIKE DOWN THE MIDDLE OF 128

(AND LIVE TO TELL ABOUT IT)