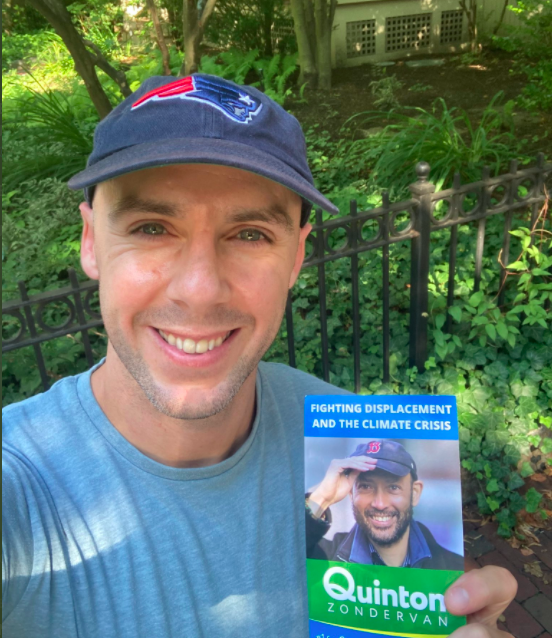 Election season is right around the corner in Massachusetts and even though our state legislators and town halls are saturated with democrats, that really doesn’t mean anything when it comes to progressive policy.

So where do progressives do to get the word out in a place that is not on social media or their dorm rooms/ apartments?

Short answer: they go to the sidewalks.

Canvassing is a form of political activism that you can do for free literally any weekend, any time in an election season, particularly when you link up with a local DSA chapter. It is one of the most effective ways of targeting likely voters and get them to associate positively with a particular candidate. So if you feel really strongly about issues like housing, climate change, or education, canvassing for local elections is a highly effective way to direct that energy into something politically powerful and impactful.

So to learn what it was like to go canvassing and see what the rave was all about I met up with DSA Field Organizer and Bostopia news’ Evan George. We pounded on some doors in the Fields Corner neighborhood of District 4 for DSA candidate Joel Richards.

Need to Know Before You Go:

First, research who you are canvassing for. This may seem like an obvious answer but take this opportunity to talk about it out loud to practice. This could save you some pre-knock jitters.

Next, before you head out of the house, I recommend making sure you dress appropriately and have some water, This time Evan was kind enough to provide water and I needed it. It was 90 degrees, so sufficed to say it was crucial.

It also needs to be said that kindness and positivity are key, so if you are feeling agitated, just sit it out because mental health is key.

Lastly, of course, have your mask ready.

If you’re hesitant to canvas, but really want to, take solace in the fact that about 9/10 houses don’t answer.

But now you are in front of the door, and to begin, you have to knock, or ring the bell, and then step back. If no one answers after about 20 seconds, drop your lit anywhere but the mailbox and in a place somewhere it won’t blow around. 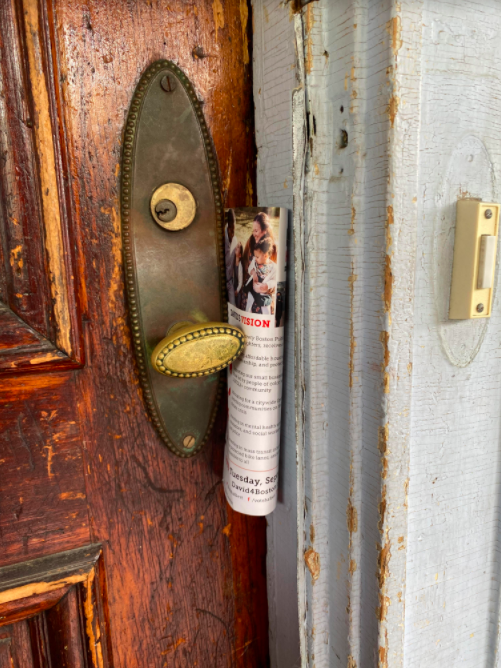 While Evan and I knocked on over 30-40 doors, we only talked to two people. But these two interactions made the day.

If you are not talking to the right person, you can still ask them if they are registered to vote or plan to and continue the conversation from there. If they say yes, introduce yourself as a volunteer for your candidate, and then introduce your candidate. As a follow up to this, Evan asks the question “What is the most important issue to you?”

If they engage with you, ask them what their most important issues are. For most folks for a local election, they will likely say either housing or education.

Evan and I’s first interaction of the day was largely about leaving a positive interaction, as the person didn’t seem to really want to engage with us.

Our second interaction, however, was the ideal interaction for a newb who is still learning the ropes.

We were in the Shawmut neighborhood and knocking on doors when we came to a house where our knock alerted the attention of two dogs, and then came the barking. Luckily this drew the attention of the homeowner, a woman with two sons in the BPS schools, one in an exam school, and one not.

Joel Richards is a Boston public school teacher and a Boston Teachers Union organizer who has a lot of experience in championing quality public schools.

Evan like a pro, knew all the issues beforehand (like getting a fully elected school committee, and making the Boston exam schools not racist.) Joel Richards has these at the center of his policies, and he has the resume to back his platform up.

So after Evan waxed political, he asked the crucial question and the most important part of any canvas interaction: “Can Joel Richards count on your vote September 14th?”

While we did not persuade the homeowner immediately to vote yes for Joel, the needle was significantly moved.

“Check out the other candidates and all their policies. But I am pretty sure Joel is the only candidate in the race that backs both an elected school committee, and making drastic changes to exam school admissions.” Evan said through a smile.

Of course if you canvas enough you are bound to run into some curious people. I asked Evan about his weirdest case.

“I talked to a lady about raccoons for ten minutes once.” I laughed.

“That was her most important issue. But the thing is if you can solve that issue for them, that person will show up to vote for your candidate every time.”

This brings us to our next lesson: people don’t vote off policy, they vote off who they like and are comfortable with. This is one of the main reasons incumbents have such an advantage, and also why as DSA members, having a positive interaction is so important.

Of course, the ultimate question if you are itching for a revolution is, is this effective? Suspend your belief as to whether the US Democracy is worth salvaging and think about the here and now. And the here and now in local politics has dire implications for the future.

With the right combination of socialist lawmakers, policy change worth fighting for is possible. Take Milwaukee in the 1910’s. Their city council was chock full of socialists at that time. Among making crucial infrastructure and modernization changes, these elected socialists worked to reduce deaths from the six leading infectious diseases at the time by 40% in two years (scarlet fever, small pox, and whooping cough, among others).

After our round of canvassing, we met our team at a community event in a Fields Corner field a “Peace-B-Que”. That is a space where groups can gather and talk, as well as make community connections. And you never know who may show up. Mayoral hopeful Michelle Wu was there, and I was immediately star-struck.

Other post-canvas activities could include getting beers (or tea) with your comrades, holding a potluck, or hydrating in a shaded area as you regain the energy to head home.

As mentioned previously, it is peak election season in Massachusetts. So Evan and DSA will be out canvassing every weekend until November.

And of course, don’t forget to register to vote for both the preliminary elections on September 14th and the grandaddy of em all on November 2nd.