We at the Hassle had the pleasure of speaking with Lenny Symczak Biesack about the beautiful work of her father, Mark Symczak. Mark, a lifelong artist, created visually compelling and complex works of art, drawing upon various themes such as industry, nature, music, and theater. Each work reflects his innate attention to detail, intricacy one can only assume resulted from hours and hours of work. In 2015, Mark Symczak passed away, however, his vision lives on through the work of his daughter Lenny, who took on the project of sorting through 40 years’ worth of paintings, drawings, and collages to showcase on his website and in exhibitions.

Tell us a little bit about how this project came about. Was this secretly something you always wanted to do or did the idea only come about after Marks passing?

Actually, this is something I wanted to do a few years before he passed!  My dad had been working on The Birds series for a couple of years and I think the massive amount of work he was creating at the time made him want to have gallery shows again.  He decided he needed a website and I immediately started scheming on ideas for how it would look.  At the time, I had very little website experience.  I had only been doing minor tasks for the ICA Teens website where I worked, but was really into it.  He decided to go with a professional company instead, and honestly, it was a sloppy job and did not showcase his work the way it deserved.

After he passed, my mom and I decided we needed to start cleaning up his studio (the garage).  I think we both felt a need to carry on what he started and try our hand at getting him more exposure through gallery shows.  So the website idea came around again, and I put a flag in taking over the design. 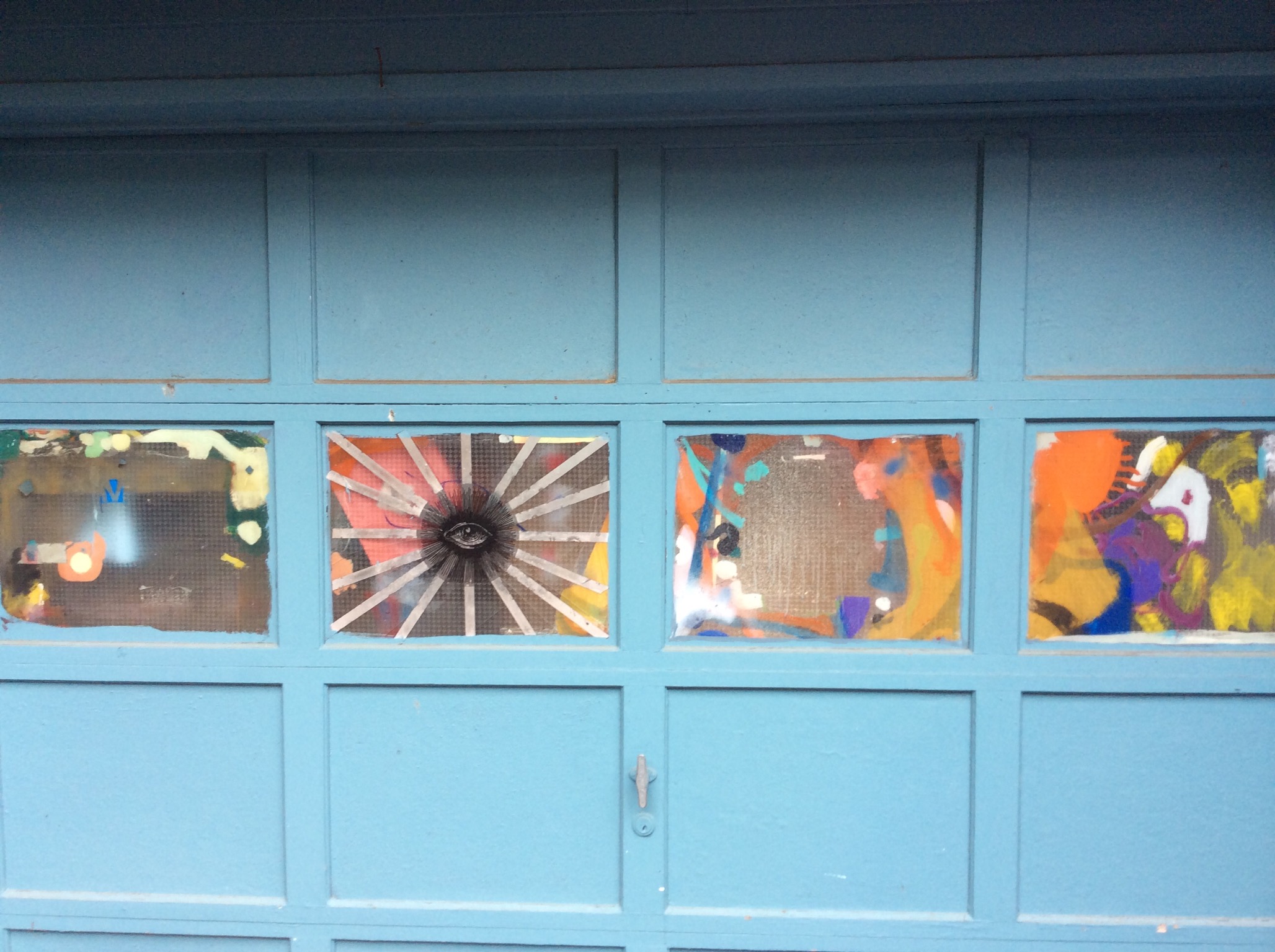 You’re an organizer and wild idea-haver but this seems like a whole other kettle of fish, a much bigger undertaking. What was it like tackling a project of such magnitude and one you have such a personal connection to? Must have been a very emotional process.

I had NO IDEA how much work he had made.  Once we started pulling out canvases to photograph for the website, we realized there were hundreds of them.  And that’s not even counting all the sketch books and loose papers that he had stored in boxes.  I think once I realized that this project would take years, I became even more invested and motivated to work on it.  Knowing there is such a magnitude of work takes the pressure off this all needing to be done in a certain amount of time.  Now we can just sit back and let it all wash over us.

I have always had a heart for archiving.  I think this goes back to my work in video editing.  My favorite part was always pouring over the hours of footage and naming files and categorizing them.  I love being given a pile of stuff that I need to make sense out of.  That’s what is so amazing about this project.  Most of the work I have never seen.  There are even styles that I didn’t know he worked in.  The website is more than just a way to promote him, it has become a record of his life.  Once you start paying attention, you can find patterns and themes that cross styles.  You can line up events in his life with paintings and start seeing how they affected each other.  You can see stories that I don’t think he would have ever told in person.  He never talked about his work very much, but loved having people look at it.  My partner in all of this (besides my mom) has been my husband Keith, and he has played a huge role in curating shows and doing write ups with me.  We wrote the bio for my dad on the website together.  Looking at his work and having to write about it has taken this project to the next level.  As emotional as it is, it has been an incredible exercise in removing myself from the story and looking at it objectively to find the truth in his work.  As backwards as it sounds, I think it is the removal of myself that has made me feel like I am getting to know him better.  This way I am getting to know him as an artist and as a person beyond just being my father. 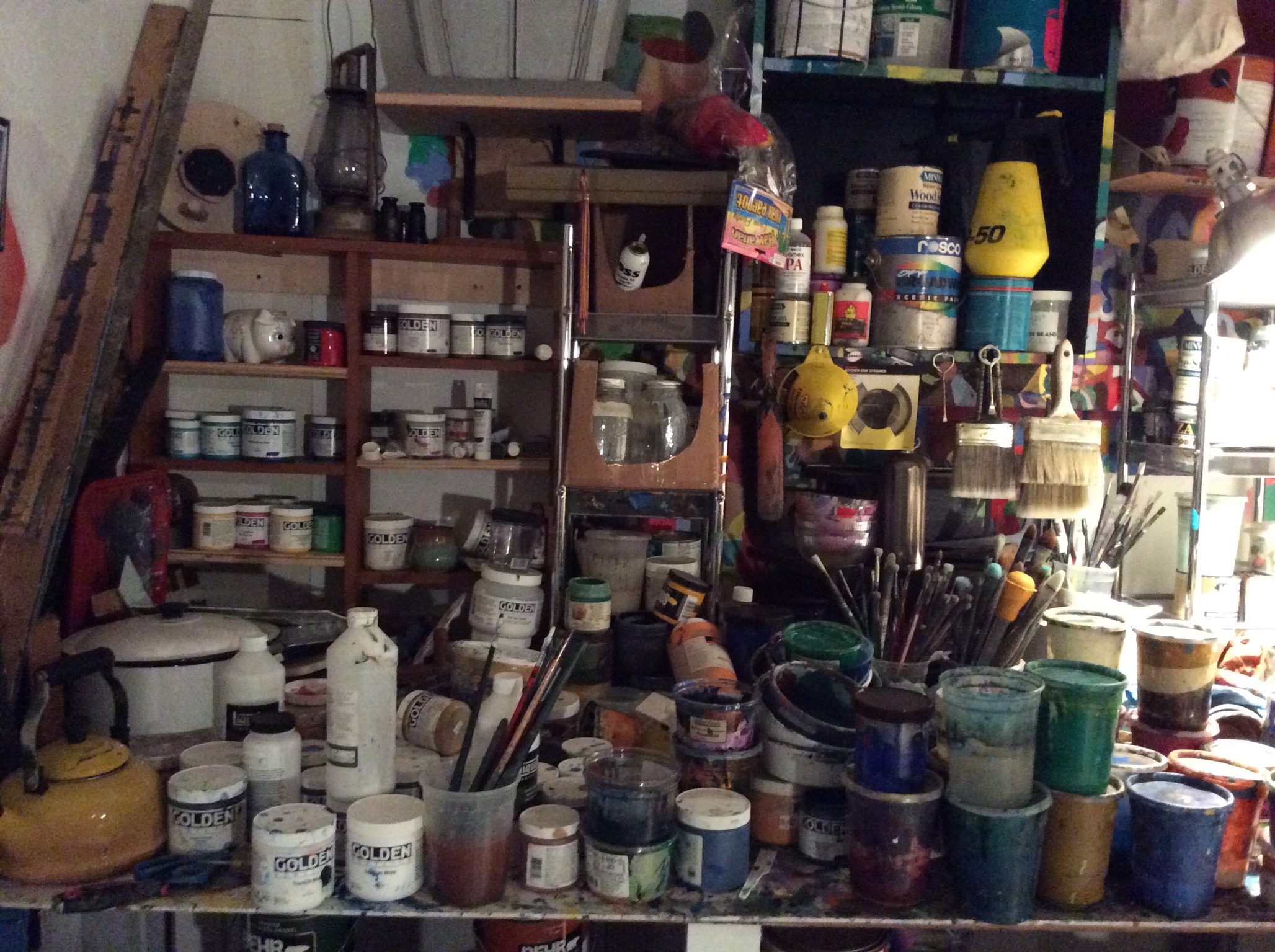 As a visual artist your father must have been one of your biggest influences from an early age, how has that influence changed from when you first started out as an artist to now having discovered so much of his work you didn’t know existed in the past few years?

This is such a great question!  My dad, Mark, absolutely was and is my biggest influence.  He introduced me to so many artists throughout my life that also can be seen in my style of drawing, namely Al Hirschfeld and R. Crumb.  Both of those guys were big for me in middle school and I think along with my dad’s simple way of doing line drawing studies my own style really solidified.  Also when we were young, he would give my sister and I painting lessons in his studio and drawing lessons in the kitchen.  He had this great way of never making it feel like it was class, but he would see us trying to accomplish something in our drawings and then make us take a break to work on what was giving us trouble, like hands (which I am still horrible at), shadows, lighting, typography…  I remember him even critiquing our birthday cards to him sometimes.

Seeing so much work that I never knew about introduced me to his ability to capture intense detail.  This can mostly be seen in his paintings from the 1970s.  The painter I knew in the 1990s and 2000s was a master of simplicity.  He could capture a person in 2 lines.  So seeing how life- like he could paint a face, or show draping fabric, or make metal look cold and steal-y was a surprise for me.  However, I don’t think it’s had much of an effect on my style personally.  I feel too ingrained in impressionists and expressionists to explore a more detailed style still.  It mostly made me admire his range of ability, and has inspired me to return to drawing people again.  I got really into buildings for a while. 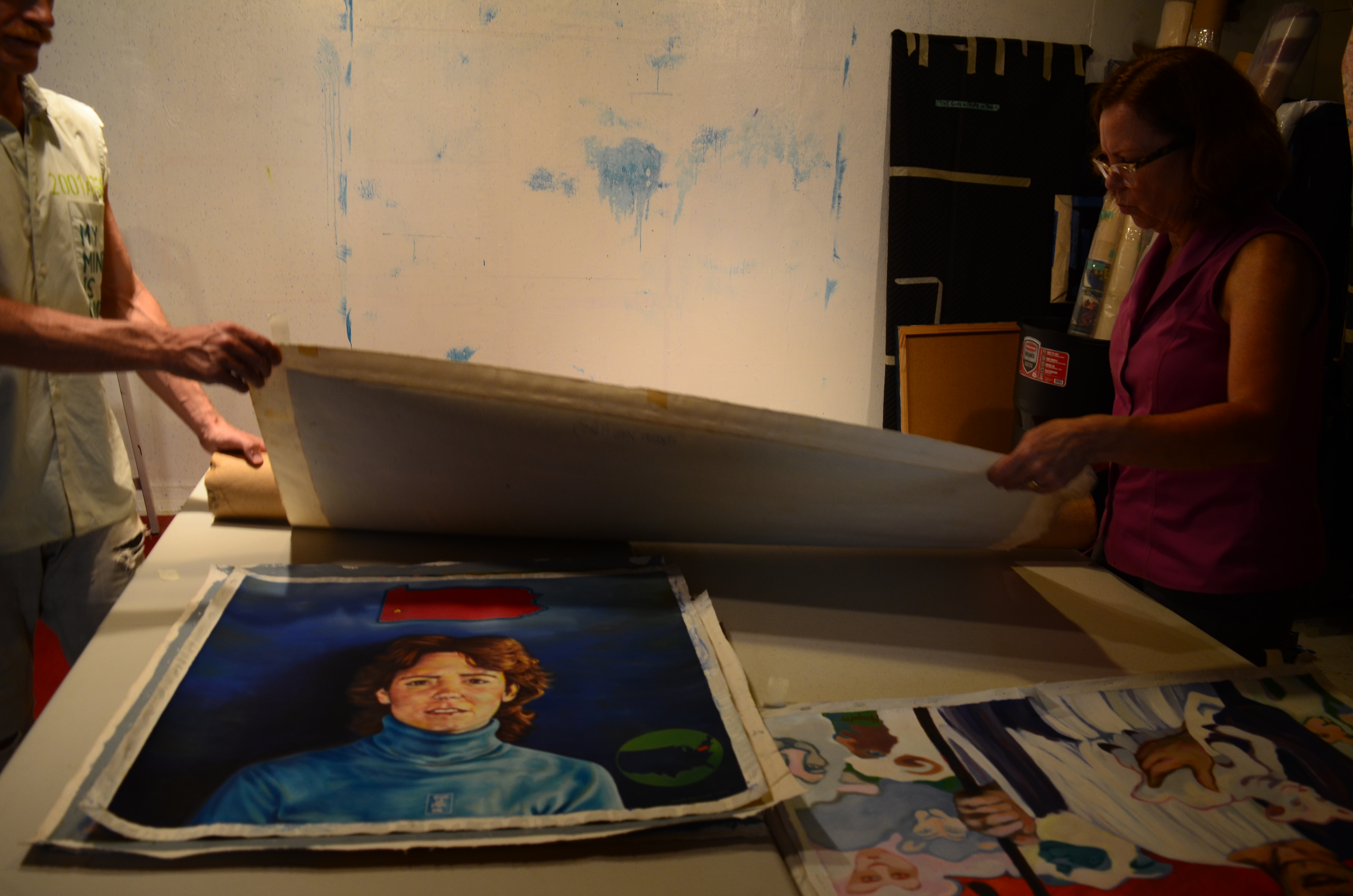 What is your connection to Boston? Could you explain to our local readers why they should appreciate Boston while they’re here even if they’re trying to get to NYC or elsewhere as soon as possible?

Another fantastic subject I love to talk about!  My time in Boston is some of my happiest memories and definitely the most formative time for me.  I moved to Boston from NJ to go to Emerson College in 2004, and then left to move back to my old stomping grounds in 2015 after the passing of my father.  I am so grateful to have spent those important years of young adulthood, transition, and growth in a city like Boston.  A smaller city with less density and less spotlight like Boston has a great cause/ effect relationship in 2 ways: you can do a lot more with a lot less, and there is a more willing, open, and interested community.  I found Boston to be a perfect place for me to explore myself and my skills and really get a the chance to realize them.  I met people regularly through the Whitehaus that were coming to shows purely because they heard they were happening.  With little to show for myself, I got a job at one of the greatest museums in the world, the ICA, just because I was excited to be there.  I got to design album covers and show flyers for some of the most inspiring bands I still know through the Whitehaus.  And I got to learn how to DJ at the legendary venue Zuzu, because I asked the DJ to show me how.  This kind of openness to share feels harder to pull off in NYC.  While NYC has so much to offer you as far as inspiration and motivation, it is a much deeper struggle to find the opportunities to do what you want, and what your heart is wanting for you.  There are a lot of people out there that are very sparked by the competition, and for them NYC is perfect.  Living 5 minutes outside of Manhattan now, I am realizing that I am not one of those people.  I just want to MAKE things and SHARE them.  But the difficult lifestyle in New York just to survive makes you really have to work for a crowd and for space, which ends up taking away a lot of time where you are just DOING.

Ironically, my dad went through a similar struggle in moving from Pittsburgh to NYC in 1982.  He had been really making a name for himself as a young artist in Pittsburgh as someone who was inventive, exciting, and new.  Naturally he wanted to put his skills to the test in the art capital of the world.  Once in New York he became the classic little fish in the big pond and got very little recognition for the still inventive work he was doing.  I think he, like many artists in NYC today, found it discouraging, but impossible to give up trying.  That’s what makes NYC such a magical place—any day could be the day you are finally heard.

All in all, for the great people making great things in Boston, I feel this city is one for real inner exploration.  And when that exploration tells you it’s time to go to NYC, then make it happen.

What is the next thing you are working on?! Besides keeping marksymczak.com updated, what else will keep you busy in 2019?

There’s so much to tell you!  Of course, keep checking marksymczak.com.  Keith and I are always working on the next exhibit.  In fact we have a new one coming up of beach scenes that we are calling The Water’s Edge.  You can see these paintings on the website under the tab “Studies”.

Another ongoing life project Keith and I have is called The Lost Grape.  This is a true collaboration of our hearts and minds through a historical wine tasting program.  With The Lost Grape we design wine tastings around historical events where wine was present.  We work hard to find events where you might not expect wine to have played a role.  For example, we did a tasting on The Donner Party, and the wine they brought with them on their journey west, as well as the wine being made in California where they were headed.  We have also recently done a tasting on the tradition of ship christenings with champagne and where that tradition or superstition comes from.  It’s fascinating work that pulls from Keith’s impressive background in wine knowledge and our shared love of history.  We are also currently working on a book series that puts these tastings down in writing so that you can do them at home, as well as a more academic book project about the invention of the railroad and the effects on wine transportation.  This new version of The Lost Grape is also letting me do more graphic design work which is a total blast.  So keep your eyes peeled for The Lost Grape book releases!  You heard it here first!