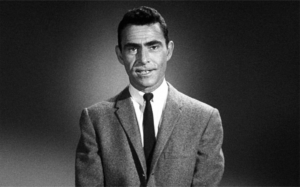 You know the iconic, eerie music that plays as a door, floating through a starry universe, opens. An urbane voice tells us what we are about to experience.

“There is a fifth dimension beyond that which is known to man. It is a dimension as vast as space and as timeless as infinity. It is the middle ground between light and shadow, between science and superstition, and it lies between the pit of man’s fears and the summit of his knowledge. This is the dimension of imagination. It is an area which we call The Twilight Zone.”

Rod Serling’s opening narration in the 1960s cult classic series, The Twilight Zone, is an enigmatic prologue to a brilliantly creepy show with heart. Packed with horror and sci-fi, the show shocked audiences everywhere and continues to do so today. Serling—the series’ creator, head writer, and narrator—was a hardworking and thoughtful man who looked at the world for what it was, and the dark potential of what it could become.

For years, audiences have been enchanted by Serling, who spun dark narratives that often contained a twist or moral. Because of Serling’s influence, we have beloved shows like Black Mirror and American Horror Story today. His influence will continue to ripple across silver screens for years to come, and will haunt us as The Twilight Zone mirrors what is happening in society today.

Since The Twilight Zone was broadcast, there’s always been the phrase that’s been tossed around: “It feels like I’m living in The Twilight Zone,” we often say when something surreal is happening. With the current pandemic ravaging the globe and the disturbing political climate in the United States, I’m hearing this phrase now more than ever.

The thing about The Twilight Zone is that it was way ahead of its time. Serling predicted events and patterns in human behavior seemingly before they even happened. That’s what makes The Twilight Zone so brilliant: Serling’s analyzation of human behavior during times of crisis, as well as hate against our fellow man in fiction, is now happening in life—just as he predicted so many years ago.

Upon re-watching some of my favorite Twilight Zone episodes written by the great Rod Serling, I can’t help but be frightened at their accuracy. 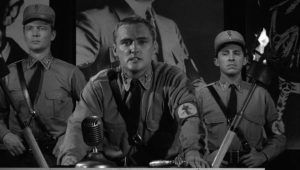 He’s Alive is not included on Netflix; you’ll have to catch this one on Hulu or Amazon Prime. As one of the hour-long episodes of Season 4, it’s often not aired on MeTV or Syfy. It’s become lost in the shuffle of many other great stories, which is a shame. This one of the most important episodes in the series, and Serling himself was incredibly proud of it—rightfully so.

Starring a pre-Easy Rider Dennis Hopper, He’s Alive paints a portrait of Peter Volmer, a hateful and cowardly young white supremacist that blames others for his weakness and lack of greatness. He and his friends have created a small Neo-Nazi movement in the slums of a dark city, where they scream and spew hate about minorities on street corners. Originally, Volmer is mocked for his words and scoffed at; only twenty or so years after the Holocaust and World War II, onlookers write him off, knowing that “it can’t happen again—it was a different time, different place.”

Volmer is visited by a specter shrouded in black, who begins to tutor him on how to become a better public speaker and leader of his movement. He instructs him to murder, to blame, and to cast down those who get in his way. Volmer’s tutor is revealed to be the ghost of Adolf Hitler, and the young Neo-Nazi is more loyal and fanatic than ever. Soon, things spin out of control, and things begin to look alarmingly like that “different time and place.”

If we forget or dismiss history, we are doomed to repeat it.

As the episode closes, Hitler’s silhouette is shown as Serling’s closing narration plays:

“Where will he go next, this phantom from another time, this resurrected ghost of a previous nightmare – Chicago? Los Angeles? Miami, Florida? Vincennes, Indiana? Syracuse, New York? Anyplace, everyplace, where there’s hate, where there’s prejudice, where there’s bigotry. He’s alive. He’s alive so long as these evils exist. Remember that when he comes to your town. Remember it when you hear his voice speaking out through others. Remember it when you hear a name called, a minority attacked, any blind, unreasoning assault on a people or any human being. He’s alive because through these things we keep him alive.”

This closing narration is among the most significant in the series. Look at how close this is to what is happening today in our society.

Whether you’re a Democrat or Republican or Libertarian or Independent, you can understand that this could ring true to President Donald Trump. The bigotry that he has spewed and the hatred he has shown (on public record, mind you) for those who are different from himself is staggering. From calling Mexican immigrants criminals and rapists to proposing a ban on all Muslims entering the US, Trump’s record is brimming with hateful white supremacist views. He even indulged the Unite the Right rally in Charlottesville, Virginia, where Klansmen, Neo-Nazis, Neo-Confederates, and Neo-fascists marched with torches, donning swastikas and other symbols of hate.

Serling’s commentary that Hitler’s hate never really dies is illustrated and brought to life by Trump and his followers, and their rhetoric; we keep Hitler’s hate alive when we continue to have the existence of things like Unite the Right rallies in our world. As long as this type of bigotry exists, the nightmare will continue for years to come. 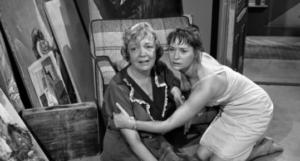 The Midnight Sun is an underappreciated Twilight Zone episode that tackles human behavior when facing death and the fall of society. It follows Norma, a young artist living in New York City. Earth’s orbit has fallen out of whack and is now getting closer to the sun at an alarming rate. Drenched in sweat as the days grow hotter, she is joined by her landlady, Mrs. Bronson. The two huddle up together in their increasingly vacant apartment building as people begin to flee in panic. It’s the “eve of the end,” as Serling brilliantly puts it in the opening narration, and the two women slowly lose it as the thermometer breaks, spewing mercury in a spastic frenzy.

What strikes me about this episode is its amazing ability to build dread, and the realization that the human race would never survive this. We simply aren’t prepared because we never thought that this would happen; it’s out of our control. In one scene, Norma and Mrs. Bronson get scraps of groceries from the dwindling store and rejoice over a can of juice. In another, Mrs. Bronson tells Norma of some falsely hopeful news she heard from a scientist on the radio. Both try to find an inkling of positivity in a despairing and dying world.

Does this sound a little familiar?

Serling hits the nail on the head. He was able to pinpoint the human reaction of fight or flight when some sort of global catastrophe occurs.

This episode echoes some creepy aspects of the current COVID-19 pandemic. Scraping by on groceries. Rejoicing when you get something, like juice, that is otherwise not available. Hanging onto hope at what a scientist or doctor said on the TV or radio. The panic of people, fleeing to lakeside and beachside homes, hidden in the suburbs, away from big cities like New York and Boston and Chicago in an attempt to get away from danger. The sheer shock at the realization that a catastrophe can bring the world to its knees and we were not prepared.

Isn’t that exactly what is happening now? 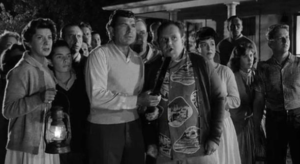 Do unto others as you would have them do unto you. Love thy neighbor as thyself.

Nope. Not in The Twilight Zone, and certainly not in 2020.

The Monsters Are Due on Maple Street is one of Serling’s most celebrated episodes. In fact, it was named as one of the top ten episodes by TIME.

It unspools the story of a suburban, happy little neighborhood in nowheresville, USA, where kids play together and neighbors throw block parties and lawns are mowed to perfection. Everything seems beautiful and happy until a flash of light and a shadow passes over the community, causing a loss of electricity. Frightened, they gather to discuss what happened. One of the neighborhood kids explains that this could be an alien invasion and that the aliens may very well be one of the families in disguise.

As things begin to unravel and more bizarre events occur, the darling neighbors turn on each other, becoming savage toward one another. A full-blown witch-hunt begins, resulting in unwarranted prosecution, murder, and fighting.

Like Serling’s The Midnight Sun, this episode is alarmingly comparable to our ongoing pandemic.

From neighbors to strangers, people have dropped their everyday civil facade and have turned against each other during this time. People won’t talk to you in stores. People look away and move to the other side of the road when they see others coming. People are rude and angry and afraid. People think to themselves, is that person infected? Do they have the virus?

Because COVID-19 is an unseen enemy, much like the aliens in The Monsters Are Due on Maple Street, people will turn on one another. It strips us of our humanity.

In the news, there are people fighting over toilet roll and food and mask-wearing. In a time of panic, Serling observed, people will turn on each other if it means their own survival.

The Twilight Zone is a series that all should watch—whether you’re young or old, into horror and science fiction or not. It’s a series that is beyond television. Rather, it’s an ethereal, fictional study grounded in a reality that analyzes human behavior and its dark potential.

Bravo, Mr. Serling. You were right.

Catch The Twilight Zone on streaming services, as well as the binge-worthy marathon that plays this July 4th on the Syfy network.