After a recent rewatch of the hazy, surreal nightmare that is Apocolapyse Now, I had a lingering thought. Is this a horror film?

At first glance, no. It’s a war drama.

Now, I’m not so sure. It’s a controversial topic. Moviegoers will fight you on it, saying that horror is completely different from war; they are separate genres. War isn’t horror, it’s just war. Horror needs to have some fantastical element to it. They need to involve ghosts, demons, monsters, or serial killers.

War films are pillars of cinema. Hollywood has made countless of them, to critical acclaim—Saving Private Ryan, Platoon, 1917, Hacksaw Ridge—take your pick. The Academy loves them, and so do audiences around the world. We watch some of them in school as we grow up.

We watch them because we are curious. We can see the horrors and depravity of battle through a fictitious lens so we don’t have to experience anything ourselves.

When we watch war films, we watch our protagonist go on a trip through hell (and back, hopefully). Isn’t that what war is, essentially? A trip through hell? War films typically capture the story of a man who is either ill-suited or unwilling (or both) for battle. He ventures into the unknown, to face an unknown enemy.

Let’s take, for instance, The Exorcist. Our protagonist (Father Karras), ventures into the unknown (the exorcism) to fight an unknown enemy (the demon Pazuzu). Now compare that to Saving Private Ryan. Our protagonist (Captain Miller) ventures into the unknown (the obliterated fields of France). There, he faces an unknown enemy (the German army). Both films follow the same formula.

Sounds like what we see in war films, doesn’t it?

Think about it. Have there been scenes in war films that disturbed you, or terrified you? Have they unsettled you in some way?

How about in Platoon, when Barnes (Tom Berenger) kills an elderly Vietnamese woman, then puts a gun to her granddaughter’s head and threatens to kill her and the rest of their family? Or, how about the famous Russian roulette scene in The Deer Hunter, when Steven (John Savage) fails to comply with the rules of the game and is put into a flooded cage brimming with rats and rotting corpses?

These scenes haunt us and stick with the audience long after they’re over. Maybe war films are scarier than conventional horror films because they’re real.

Psychological horror “uses mystery elements and characters with unstable, unreliable, or disturbing psychological states to enhance the suspense, drama, action, and paranoia of the setting and plot and to provide an overall unpleasant, unsettling, or distressing atmosphere.”

So, I pose this question: can war films also be categorized as psychological horror films?

Throughout time, Apocalypse Now has been compared to a variety of works, from Dante’s Inferno to Cannibal Holocaust.

Francis Ford Coppola’s epic war drama (based upon the novella Heart of Darkness by Joseph Conrad) is often hailed as one of the greatest films of all time. It’s known for its stunning cinematography, overwhelming sets, and legendary cast. The hallucinatory dreamscape is dotted with heavy-hitters like Marlon Brando, Harrison Ford, Dennis Hopper, Martin Sheen, and Scott Glenn.

The production of the film was notoriously chaotic. Sheen suffered a heart attack, Brando was difficult to work with, Hopper and Brando nearly came to blows, and Coppola had an epileptic seizure, among other catastrophes.

Above all, it’s known for its brutal, disturbing depiction of war and the negative psychological effects that come with it.

It chronicles the journey of Captain Benjamin Willard (Sheen), an officer serving in Vietnam. He is suddenly pulled into a briefing by Colonel Lucas (Ford), who informs him of Colonel Kurtz (Brando), a once-highly respected officer who has gone insane. Kurtz has a militia and is operating as a rogue. Willard’s mission was previously attempted by another soldier, Colby (Glenn), who has been psychologically manipulated and defected to Kurtz’s army. Lucas commands Willard to journey deep into the heart of the jungle to assassinate Kurtz and his command. To accompany him, Willard takes young soldiers Chef, Mr. Clean, Chief, and Lance. 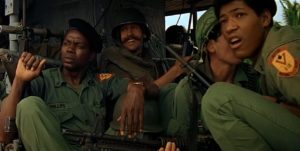 Typically, psychological horror films “aim to create discomfort or dread by exposing common or universal psychological and emotional vulnerabilities/fears and revealing the darker parts of the human psyche that most people may repress or deny.”

A lurking sense of dread grows throughout the film as Willard slowly approaches his target, through both Willard’s behaviors and those around him. These characters’ behaviors reveal the darkest parts of humanity. Isn’t that what they say, though? That “war brings out the darkness in the hearts of men?”

Along the way, we are subjected to a series of disturbing spectacles: a napalm bombing, the slaughter of a Vietnamese village, and the death of Chief. Chief’s death is something out of a horror movie, and not typical to a war film; as he is struck with a spear through his chest, he falls. Willard tries to comfort him as he dies, but suddenly, he takes hold of Willard’s head, and with force, tries to impale Willard with him on the spear. Willard suffocates Chief to finish him off.

Things come to a head when they arrive at Kurtz’s hideout, deep in the heart of the jungles of Cambodia—representing Willard’s descent into the center of hell, or “darkness.” The men are greeted by the coked-out, manic, Charles Manson-esque Photojournalist (Dennis Hopper, in a small but brilliantly creepy performance). The Photojournalist shows Willard and his company around, casually walking past dead, blood-drenched soldiers and civilians, who are strewn across the grounds and hanging from the trees like Christmas decorations. The Photojournalist assures Willard and Chef that Kurtz is brilliant; upon seeing the severed heads that line the steps to Kurtz’s chambers, The Photojournalist says, “I know, I know. The heads, you’re looking at the heads. Sometimes he just goes too far. He’s the first one to admit it.” 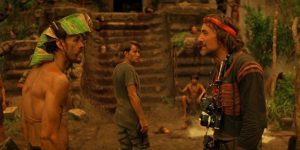 The Photojournalist meets the requirement of a character who is “unstable, unreliable, or in a disturbed psychological state” that enhances the distressing atmosphere of Apocalypse—he’s lost his mind. His disturbing devotion to Kurtz, as well as his numbness to the bloodbath that surrounds him, is chilling.

Like Hopper’s Photojournalist and the compound as a setting, Brando’s Kurtz is what makes the film horrifying. He embodies the disturbing aura of Apocalypse. When we meet the Colonel, he’s a frightening, enigmatic, large man drenched in shadow, rambling like a madman. He shows malevolence and impatience to those around him. Kurtz is impulsive, and he murders at will. Both the American and Vietnamese armies fear him for his deranged mind-frame that is extreme—even for war standards.

In possibly the most frightening scene in the film, when Willard is captured, Kurtz beheads Chef. With Kurtz’s face slathered in war paint and low lit to create an eerie effect, he drops the severed head into Willard’s lap. Kurtz wordlessly vanishes from the scene, leaving Willard to scream in terror at the sight of his slaughtered comrade.

As the film comes to a close, Willard begins to lose it. He slips into Kurtz’s chambers and kills him with a machete. Here, he mutters his notorious last words, “the horror, the horror” as the film fades to black. The meaning? Kurtz, in his last moments, has “a final acknowledgment of sin and complicity in the horror of the setting.” 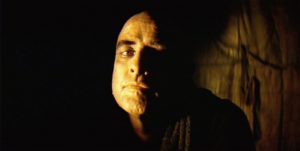 Willard has now become unreliable, as he has been beaten down from what he’s seen in war. The psychological effects have damaged him. Think about it—spanning from the breakdown he has in his bedroom in the opening scene of the film, to his thousand-yard stare after killing Kurtz, how reliable is Willard, as our narrator?

The psychological horror genre challenges the audience’s grasp of the story by showing us “characters’ perceptions of their surroundings or situations which may be distorted or subject to delusions, outside manipulation or gaslighting by other characters, emotional disturbances, and even hallucinations or mental disorders” (this may apply to Kurtz, The Photojournalist, Colby, Chief, and Willard). These characters frame a story drenched in horrific violence that is structured in a disturbing, distressing atmosphere (war) that deeply unsettles the audience; all the while, Willard has made his trip through hell and back, and beaten the “greatest evil.”

Apocalypse Now is a stunning film that deserves its title as one of the greatest movies ever made. From its eerie, hazy atmosphere, underlying dread, and a terrifying cast of characters, it’s a film straight out of a night terror that you can’t wake up from.

I don’t necessarily agree that war films can’t also be categorized as horror films. War is horror. Just because there is a meaning to it (fighting for a cause), doesn’t make it any less horrific. Horror films have meanings, too—people just tend to overlook them.

Coppola’s classic may very well prove that war and horror can go hand-in-hand as a cinematic genre.