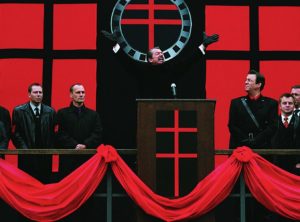 This version of Horrorland is going to be a little different than normal.

While I adore horror films, love being terrified by them, and look forward to ranting about them in these monthly segments, I cannot focus on anything right now other than the horrors that are going on in our reality. Nothing is scarier than what we are currently facing. So, here we go.

As you know, Joe Biden has been elected the President of the United States. Saturday night was a night of relief and happiness, knowing that Mango Mussolini would soon be gone from the peoples’ house come January 20th.

Voters came out in hordes, standing up for what they believe in, for their country, for their communities, and for their rights. Celebrations of Trump’s defeat erupted in the streets across the world, from San Francisco to Atlanta and to Philadelphia to Boston. Fireworks exploded over London and church bells rang through the streets of Paris. Nothing quite like being that much of a villain that the whole world celebrates your defeat like it’s the end of Return of the Jedi.

Though Biden has won, Trump refuses to concede, despite the fact that it has been tradition for decades. He and his crew of cronies are spreading lies about “widespread voter fraud,” in which they believe (or maybe they don’t, who knows anymore with these weirdos) that there are thousands of dead people who voted Democrat – and that’s only the tip of the iceberg. Shockingly (please read that in a sarcastic tone), there has not been one inkling of evidence to back up these claims, which, naturally, are false.

Despite this, Trump refuses to give up, building high walls around the White House and sending out Joseph Goebbels-wannabe Press Secretary Kayleigh McEnany to spit his false and hateful rhetoric (to which not one news network, even Fox, will listen anymore). Trump has threatened his staff that anyone he catches looking for a job will be fired, as he makes a budget for his “second term” for February. He has also begun firing Pentagon officials that do not agree with him and replacing them with loyalists, a move that Pentagon employees are now calling “dictator.”

What really sent me over the edge was Mike Pompeo (he doesn’t deserve the title “Secretary of State” before his name), coming on air last night, saying, “there will be a smooth transition to our second Trump administration. We’re ready.”

This, my friends – whether you are Republican, Democrat, Independent, Libertarian – is undermining an election, one of the top warning signs of fascism, not to mention the ones that Trump is already guilty of (control of mass media , powerful nationalism [“make America great again,” Stephen Miller’s treatment of immigrants and families at the border], rampant sexism , disdain for intellectuals and the arts ). Here are other relevant signs, provided by the Holocaust Museum in Washington, D.C.: 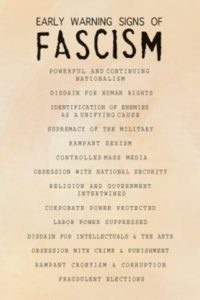 As I find myself increasingly disturbed by this “administration,” if you’d even call it that, I can’t help but compare them and their rhetoric to that of a genre that is just as scary as any other horror movie: dystopian film. 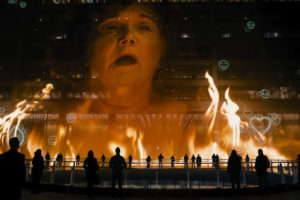 This remake of the 1966 film is far from perfect. In fact, it has a lot of issues, but I chose it because it’s more modernized and relates better to what our society is going through.

The film takes place just after a second civil war, where books are banned, with the Bible as an exception. Books are systematically burned by the “firemen,” who are part of the Ministry, a totalitarian dictatorship that blames unhappiness, mental illness, and conflicting opinions on reading the “wrong” literature.

Sound familiar? Trump likes to blame lots of things on “the wrong literature,” such as materials published from outlets like CNN, MSNBC, and BBC. Anything he doesn’t agree with or puts him in a negative light, Trump calls “fake news.” He’s even gone as so far to try and prevent the publishing of books that tell the truth. He tries to restrict our intake of news and stories to control what we think. Hell, he’s already got his supporters brainwashed. They can’t think of anything else than what he tells them to think.

Guy Montag (Michael B. Jordan) is a fireman in Cleveland, who without question goes about his job under the command of his captain and mentor, John Beatty (Michael Shannon). When he is exposed to the history of America before the rise of the Ministry, his views are challenged and he realizes that he, too, wants to read.

Something terrifying about this version of Fahrenheit is that when firemen attack people who are still keeping books, they broadcast it for the world to see on large projection screens through cities, where people can “like” and “love” what they’re seeing. In a particularly disturbing sequence, the firemen infiltrate the home of a woman with a massive library. She dies in flames with her books, which is shown to America over broadcast. The likes and smiley faces come pouring in.

How is this different to Twitter, or Instagram, when we see a video of an injustice being done? When we see Trump or his cronies attacking people in posts or at rallies or in interviews, what do we do? We like it, we comment, and we keep scrolling. We have become numb to him and his actions. 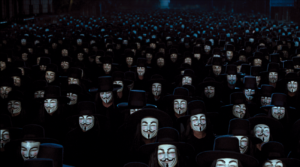 The film takes place in a not-too-distant future where London is a police state, run by a fascist government after a second civil war and a pandemic that has devastated Europe. Political opponents, immigrants, Jews, Muslims, atheists, homosexuals, and other “undesirables” are thrown into jail and systematically executed. V (Hugo Weaving), a Guy Fawkes-masked vigilante, fights his oppressors with the help of television crew member Evey Hammond (Natalie Portman).

This world is horrifying, no doubt – but how far away is it from ours?

V for Vendetta sets the stage for us: a curfew is enforced every night, anyone who speaks out against the regime disappears, and the television has propaganda on every channel, with government-OK’ed programming to control what you’re seeing.

Now, let’s look at Trump and his administration. Anyone who speaks out against him and his ideology “disappears,” as I mentioned earlier. People are getting tossed out of the White House and Pentagon left and right if they don’t agree with him and are swiftly replaced with people who do. Why do you think Republicans are terrified to stand up to him? It’s like walking on broken glass – they make one “wrong” move, and they’re in deep shit. If you go against what Trump says, you’re booted. You go away. Thanks to BBC, you can find a list of the people Trump made “disappear” here.

Trump’s political opponents are victims of gruesome attacks – and they’re not just Democrats. It doesn’t matter what party you are. If you go against him, you will be brought down by him and his administration. He’s enforced a Muslim ban. He’s made chronic anti-Semitic comments, which has influenced his followers to do the same. Those closest to him have followed suit (the most shocking – recently at least – is close Trump confidant Georgia senator David Purdue, who pushed an anti-Semitic ad against his opponent, Democrat nominee Jon Ossoff. Purdue also purposefully mocked Vice President-elect Kamala Harris’s first name at a Trump rally).

Currently, Trump and his team are pushing propaganda on television to brainwash, as I mentioned earlier, with Kayleigh McEnany spreading blatant lies about the election which they believe is “fraudulent.” The only fraudulent thing about the election is them, and that they think they’ve won it. Never in my life have I seen every news network cut away because they believe that the spread of this misinformation is dangerous to the public.

We are living in dark times, my friends. I would have loved to do a write-up of some sort of scary movie, some genre that I could rant and rave about as I normally do, but not now.

Not when our reality is scarier than any work of fiction.