(WARNING: SPOILERS AND SPOOKINESS AHEAD) This year, I welcomed spooky season by watching Alfred Hitchcock’s Psycho. I’ll admit, it was my first time seeing the film and it was long overdue. When I left the theatre I was in a trance and stayed up until 3 am researching the ins and outs of the film. I wanted to find out everything Hitchcock did to create his unearthly scenes- How did he frame his shots? How did he design his sets? Why was there a mansion behind a motel? What’s with all the birds? Then, I stumbled upon a familiar name- Edward Hopper. Best known for his painting, Nighthawks, Hopper had a great influence on Alfred Hitchcock’s films. Psycho certainly takes a lot of inspiration from his works when it comes to set design and scene composition. Both of these incredible artists are prudent when using human beings as their subjects. It may seem strange for a movie to be this way, but in Psycho, most scenes only have one or two characters. It is only near the end of the film when we are introduced to a surplus of people. Hopper’s work features people who are drenched with dejection and loneliness. Even though there are multiple people in Nighthawks, they all seem so discombobulated. Everyone is in the same bar, but no one is connected. There’s a chilling plainness in some of Psycho’s scenes that mimic Hopper’s use of simple (yet realistic) shapes as well. This juxtaposition of ordinariness and solitude contributes to the manifestation of The Uncanny in Hitchcock’s films. Taking a typical American setting and then peppering it with a sense of ominous isolation makes everything untrustworthy- truly a transformation of the familiar into the unfamiliar. 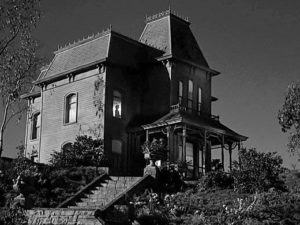 Hopper’s most obvious influence in Psycho is the painting, House by the Railroad. Essentially, it’s Hitchcock’s blueprint for what becomes the Bates’ home (and what perhaps symbolizes Norman Bates’ psyche). Hopper’s painting depicts a nearby mansion separated from us by railroad tracks. The strange house feels impenetrable, almost as if crossing over to it means risking your own life. Will a train hit you? What is being kept in? Why are we being kept out? The house comes across as lonesome, but getting inside and discovering its secrets feels wrong. The roof and the columns and the windows are overbearing- which is also how Norman’s mother is characterized in the film. It’s almost as if the house itself is watching you. Marion Crane certainly felt the matronly eyes of the house judging her in her short stay. I doubt that without inspiration from House by the Railroad, Hitchcock would have had such a dynamic set design. Outside the Bates Motel

Scenes outside the Bates Motel, especially exchanges between Marion Crane and Norman, are comparable to Hopper’s Summer Evening. The painting appears to be very simple- two people having a chat on a porch at night. The area feels empty without lofty decorations or colors in both the painting and the film. Looking closely at the images, even the light sources are similar. The way the dim light hits Norman’s turned head is the same as the one hitting the man in the painting. It feels like there’s a fear of vulnerability or a separation between the people. The conversations outside between Norman and Marion seem innocuous and safe with no hint of what is going on inside. The simplicity, in this case, is associated with a false sense of security, which is aesthetically inspired by Hopper.

These themes of isolation, dissociation, and American realism are stitched into Hopper and Hitchcock’s masterpieces. Below I have compiled a few stills from Psycho that are visually inspired by (or similar to) Hopper’s work. Many of Hopper’s paintings involve looking in/through windows and post-coital scenes. The opening scene of Psycho zooms in through a window to show us Marion Crane and her boyfriend, Sam Loomis, after making love. The positions of the characters, simple set designs, and high contrast are characteristics of both of these scenes. Interestingly, both Norman and the man to the right in the painting are dressed more casually and hold a nonchalant pose. The other characters appear more formal and stiff. 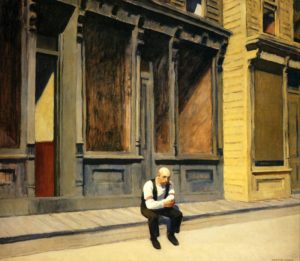 A worried Norman after being questioned by a private investigator.

Both Norman and the man are distraught outside a building with a backdrop of windows. Holding their own hands and anxious, both of them look down and away. I think Hitchcock was truly inspired by the emotionality of Hopper’s pieces such as Sunday when he was crafting Norman’s character.

Although Psycho definitely made me think about possible murderers that can kill me, it also left me with an understanding that art doesn’t exist in a vacuum. Once a work has been created it’s immortalized by all those who are inspired by it.

If you would like to investigate similarities between Hopper and Hitchcock yourself, there is a wonderful blog called 1000 frames of Psycho where you can meticulously look through the film roll.

Eating Mangos naked is the only way to prevent your outfit form getting stained.