For over five years, Portland, Maine’s Herbcraft has tantalized with its blues-inflected psychedelic rock that floats, throttles, and caresses listeners into a state of psychotropic bliss. The group, led by songwriter/guitarist Matt Lajoie, has steadily evolved to the point where it is less a conventional band and more an experience of aural shamanism, its live shows leaning to and fro, gazing steadily up into the night sky and out into the ether.

With their most recent full-length Wot Oz, the band has produced perhaps its most cohesive, full-bodied work. The song cycle fully embraces the medium of the album, intended to be played in its entirety and as a journey into the recesses of the mind. The opening track “…We’re Gonna Make It” is all lushness, a sonic crash to start the engine before submerging into rollicking wave after wave of filtered guitars. Lajoie’s influences are on display throughout as the track segues into the relentless drone “Fit Ür-head,” the engine plugging surely along as the vocalist shouts incantations into the microphone, easing angular shapes out of the whip of each distorted chord. 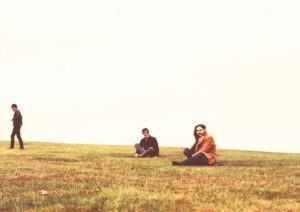 Within the context of a live setting, Herbcraft possesses the uncanny ability to wrench colors from the air almost endlessly. I myself have seen many a performance of seamless integration, tunes segueing into vignettes and back into whole songs which last upwards of twenty or thirty minutes or more. It is akin to watching a magician pull the ribbon from their top hat – only here the ribbon is the crushingly loud kaleidoscope of this Maine trio’s sound, the churning of Joe Lindsey’s bass melding with the synchronistic plugging of drummer Aaron Neveu while Matt Lajoie variously shreds guitar or blasts into a harmonica: not so much playing notes as using the instrument to cast feedback-laden spells.

Meanwhile on Wot Oz, although the band has yet to crystalize on record the marathon-like jamming, the segues are fresh and on-point as the gravelly highway of “Ür-head” chills into the near-dub ambience of “Au’s Nation.” There’s only a moment to ponder whether this is what the sound of waves crashing against the sand on a starlit night in Maine sounds like; the highlight of the first side, and possibly the album at large, punches right in with the huge riff of “Push Thru The Veil.” Described as having been influenced by the groove of ’70s rock from Zambia, Lajoie’s guitar work at times buzzsaws in a manner sounding not unlike the percussive plinks and plops of a west African stringed instrument known as the kora. More than any other track, this one deserves to be played absolutely loud.

The second side of the album sees the rhythmic layering of “Veil” subside into the breathy incantations of “No More Doors.” The extended tune makes use of layered guitar work to create the aural centerpiece of this psychedelic horn of plenty; a patchwork quilt of bells, of tools at work, of undulating groans, the wind howling and a storm brewing. Although the pace of the album can be difficult to maintain at moments, this twelve-minute track doesn’t lose focus. Indeed, even without explicit vocals, the song seems to explicitly state the destination of the album as it veers into the stratosphere. The interdimensional soundscapes of “Bread Don’t Rise” only go to complete the journey, never quite making the splash landing so much as re-entering orbit, a satellite that – like Herbcraft – picks up and relays an amalgam of exotic sounds and strange languages: alien to our ears, perhaps, but all the more comprehensible for the prism that this power trio holds up to the light.