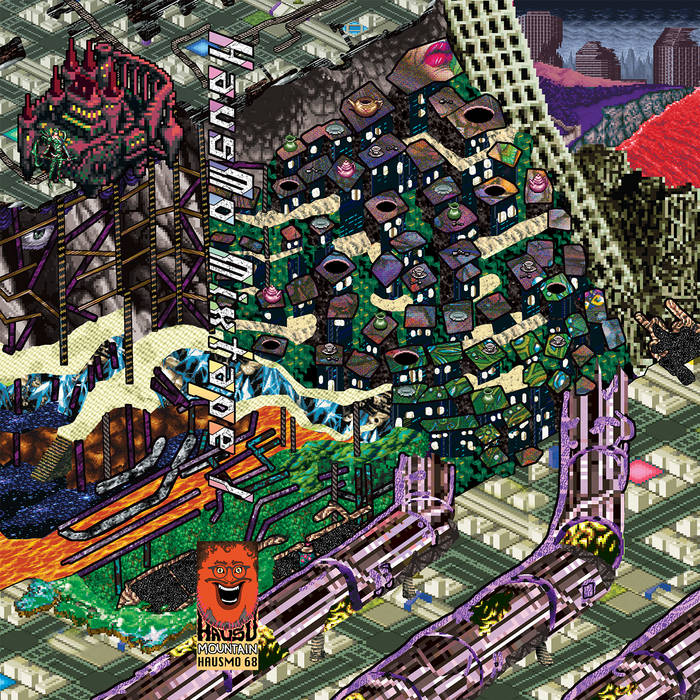 Hausu Mountain has been a beacon of light in the Midwest since its inception in 2012. Countless electronic weirdos, be they disciples of pure melodic ambient, warm and comforting like a mother’s embrace, or strange creatures crafting dark improvisational soundscapes, all have a “Hausu Mountain” sound. It’s hard to describe, ephemeral as an acid trip and almost as deep. This tape offers a taste of what could be if you took a step on a journey to climb the Mountain.

Can we please talk about the jazz? It’s as if Ornette Coleman possessed one of the many hosts of a “lofi anime hiphop beats to study to” YouTube stream. The Compound Blues by Quicksails is reminiscent of Portishead but with a sinister edge, a jazz concert, where something has gone terribly wrong. The horns float through the air; smoke from the bassist’s cigarette wafts out into seats of an abandoned theatre. Rising 8-bit tones squeak and squeal like little animals eating the decaying body of the missing pianist. They run up and down the keys, gnawing on fingers. The only real audience member is the listener tied down in the front row. The bassist stares forward, rust brown stains caking a light gray Men’s Wearhouse number bought on sale. His hands carefully plucking strings. Long gone members have been recorded onto a Playschool tape deck, “Compound your blues……” the man whispers to you.

Softness does exist on this album, with artists like FIN and Black Hat making the listener disappear into the void. Black Hat creates the sense of peace one gets from dissolving into an array of stars, to be one great nebula and at one with the universe. Clicking beats and soft synth meld together, a warm sound that fills you from head to toe. FIN does this too, but the vocals add a layer of ethereal beauty that does not exist with Black Hat. The way they serenade you conjures visions of neon lit city streets and a woman with a kind face smoking in the passenger seat of a car. Although the skyline in the background is burning, everything will be okay. Brett Nauke also adds to this atmospheric camp with Hallucinations I-V, using chiptune synths drenched in reverb to create something right at home in a Yume Nikki kind of video game. It’s equal parts fearful and wonderous, a kind of sonic magical realism where he takes you to his own personal soundscape where the strange has become the normal, soft and kind as the synths twinkle like little stars in one big night sky a quiet whisper of everything being okay.

A real stand out though is Moth Cock, and not just for its name. The track The Flesh Shall Never Enter is the musical equivalent of a dissociative episode. It starts out relatively conventional with analogue synth and a steady drum beat, rising and falling square waves, and random tones. All of it could be anyone’s microbrew drinking, American Spirit smoking, Korg playing “experimental” artist neighbor who does shows to three dozen unenthused wool hat wearing twenty-nothings. Then the recorder hits and it turns into a chaotic spiral that disconnects the listener from this reality. The second the distonal pipes begin to play the entire track breaks down. Everything comes undone, the only tether to the mediocre scenester facade is the drum beat. The synths glitch and all that remains is one big wall of noise.

Hausu Mountain’s compilation certainly has a lot of variety to it. To some that may be a weakness, but it truly encapsulates the Hausu “sound”. It’s a ringing endorsement of the label’s artists, conventional and strange, all of them beautiful in their own way. To get a taste of what this wonderful label has to offer, pick this mixtape up.

Liked it? Take a second to support Michael Conlon on Patreon!