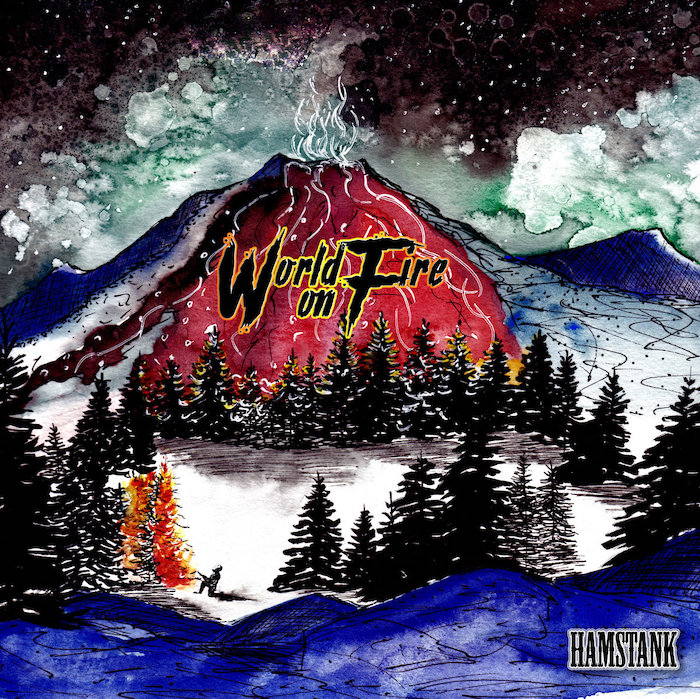 In April, one month before Tony Hamoui released his EP World On Fire, I paid a visit to the producer at his Canton home studio. There, I encountered Hamoui, deep in final mixing stages before turning over his EP for mastering.

Empty cups of coffee and musical hardware, opened to reveal exposed wire, were strewn across tabletops. With fro held up in headband a la John McEnroe, Hamoui diverted his gaze away from the Protools session open on his desktop computer, to proudly hold up a side work-in-progess I had inquired about: a harp which he had built and strung by hand.

This scene is how I like to think of Hamoui at his best. The man’s a tinkerer, a mad scientist at work. Considering the vast array of genres and artists he has worked with, his frenetic pace is justified.

Between serving as a producer for local hip hop collective Hipstory and teaching music technology and business courses at Berklee, Tony Hamoui operates as a solo entity under the moniker, Hamstank. It is through Hamstank that Hamoui funnels work to the public fashioned in his own, organic voice and style. A voice that is less grounded in rock, rap, and R&B. But moreso, his work presents as epic fantasy film score. Hamoui is Boston’s musical go-to for magical realism.

In January 2018, Hamoui released his debut EP Rise of the Giant King, a concept record that explores mental health, chronicling a story of a 1000-year old evil. With his May-released EP, World On Fire, not only has Hamoui expanded upon his story that began with Rise, but he has outdone himself sonically. While Rise employs acoustic instrumentation, World On Fire manages to carefully balance more synth textures into its palette. Somewhere between John Williams and Brian Eno, Hamstank exists as a master arranger. And this time around, he’s presented a new cast of musical collaborators as characters that vocalize their own philosophies on dealing with personal demons on World On Fire.

We recently chatted with Tony “Hamstank” Hamoui to unpack his thoughts on the EP since its release.

Boston Hassle: Your EP World on Fire has been out for a few months. What are your thoughts on how it’s been received thus far?

Tony Hamoui: The reception has been great! The front-facing side of music is always really weird for me. Each project is a little snapshot of where I’m at, as a creative. I did the deed, released it, and kind of went on to work on some other things with some cool people. I’m one of those dudes that always has hundreds of notifications just sitting there.

BH: You’ve mentioned that this record, as a follow up to your EP “Rise of the Giant King,” is one about “a climb” and “confronting your demons.” Have any real life experiences inspired you to explore these themes?

TH: Oh yeah, experiences are always creeping in. The way I see it, picture a traffic intersection that branches out into roads as far as the eye can see. Each person is in the middle of a unique intersection of experiences. Hundreds, if not thousands, of these interconnections inform our current selves. Most of these roads aren’t even directly influencing us, but those around us. For me, music is the most efficient vehicle for providing a snapshot. Leave it to me to get all abstract and weird…

To give one example off of the album, in “Journey”, I didn’t include any information on the speaker. I wanted the speaker to be anyone. My roads intersect with those around me, and the way I see it, the album is a snapshot of the planet, from space, with me standing in the middle. Basically, a la Pale Blue Dot. 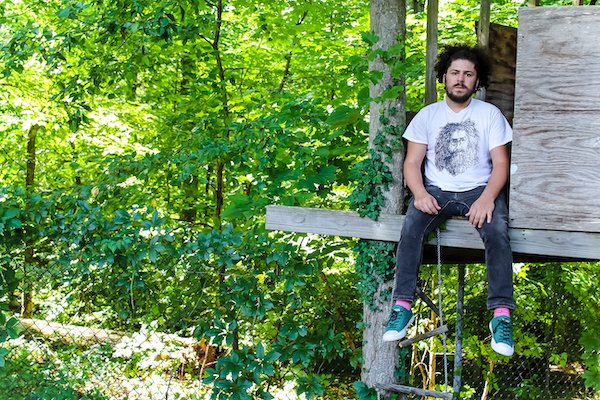 BH: When you look back now at your experience of producing and releasing World On Fire, in totality, what are you most proud of?

TH: I’m most proud of my intentionality. I feel like I really trimmed the fat on all of these songs and didn’t waste any time or arrangement space. This project was exactly as long as it needed to be without additional BS crowding the arrangements. Rather than fiddle around with a bunch of sounds at once, I took the time and wrote all of these songs on a piano or guitar, acoustic.

BH: This project ends with the EP title track, “World On Fire.” Was this dramatic conclusion intentional? What message did you want to leave listeners with?

TH: This was actually the first track I wrote for the project. Anjimile performed it better than I could’ve imagined and Cliff just absolutely ran with it. always astounded at how he can create within this bounded concept and deliver so stunningly, in performance and writing. As we ascend the mountain, and overcome our bullshit, there’s nothing left to do but burn it down and rebuild. On a grander scale, every single day we hear about a new reason why the world’s gone to hell. Regardless, the world still spins. The sun still rises. The mountain will be there long after our extinction. I’ve been told that this ending is cynical, but I actually think it’s nihilistically positive. Relax, the world’s on fire, kick off your shoes.

BH: From metal to hip hop to electronica, you balance so many styles on your own and simultaneously work with such a vast range of artists from different genres. It’s tight.

TH: Thanks! It helps when you work with such talented musicians. I like to see myself as a mix of Rick Ruben and Quincy Jones… I’m Rick Jones, bitch!

BH: (Laughs). Well, as someone who can produce anything with virtually anyone, how do you find a direction to follow when making concept records like World On Fire?

TH: When finishing a project, there’s always this nagging fear that I’ll never create again. It leads to weeks of trying (and failing) to make something great. After these long, weeks there’s this spark of clarity. For WoF, I remember it vividly. I take a solo trip up to Vermont for about a week every year. The only person I’ve taken there was Oompa, for preproduction of the upcoming album. In this small, pretty awesome barn, I completely unplug from electronics. Like, not even checking the time. The greatest part is the overwhelming boredom. When was the last time you were bored? Real boredom. I picked up this book called Winesburg, Ohio by Sherwood Anderson and read the most stunning passage about how the world was on fire and we’re in a constant state of decay. The book literally fell out of my hands and next thing I knew, this whole song was written, minus Cliff’s awesome verse. From there on, the songs just kind of wrote themselves, as if some cool apparition in my subconscious was guiding me.

BH: All mad scientists have a formula. When you’re creating in the studio, what items can you not do without?

TH: I can’t live without my notebook. I’m not a fan of looking at my phone in creative spaces. There’s always so much going on. The second you open your phone, you see the dozens of ways people are trying to interact with you. So many thought processes. We always think we’re good at multitasking, but there are actual scientific studies that prove the opposite. Looking at it from my new favorite intersection metaphor, it’s like having construction during rush hour. The cars keep piling up dozens. In the studio, I try to adhere to the “unplugged” mindset as much as I can. I really urge people to try this. You basically take those dozens of thought streams and channel them toward the music. The ability to really explore singular abstractions increases tenfold.

BH: How do you navigate being both a producer and a solo artist? Is it difficult coming back to a place to create for yourself after long periods of producing others’ work?

TH: Oh my God, yes, definitely. I find that it’s usually one or the other. I work best when I’m fully living in a project. It’s 2 completely different mindsets to have. When I’m working with others, I’m just trying to fill in the gaps that would enhance their creative vision. Whether it’s via mixing or creating, I rarely have to come up with the foundation of the song; all of my focus is on expanding on this foundation. It’s the complete opposite when it comes to producing my own stuff. A lot of energy is put into the base-building, which is why I think collaboration is so crucial. The songs that I make by myself are just an extension of the base; just a drab rectangular building. Collaboration is how you get those dope Howl’s Moving Castle-type structures.

World On Fire is available now. Listen to it on Bandcamp here. To learn more about Hamstank, visit his website here! 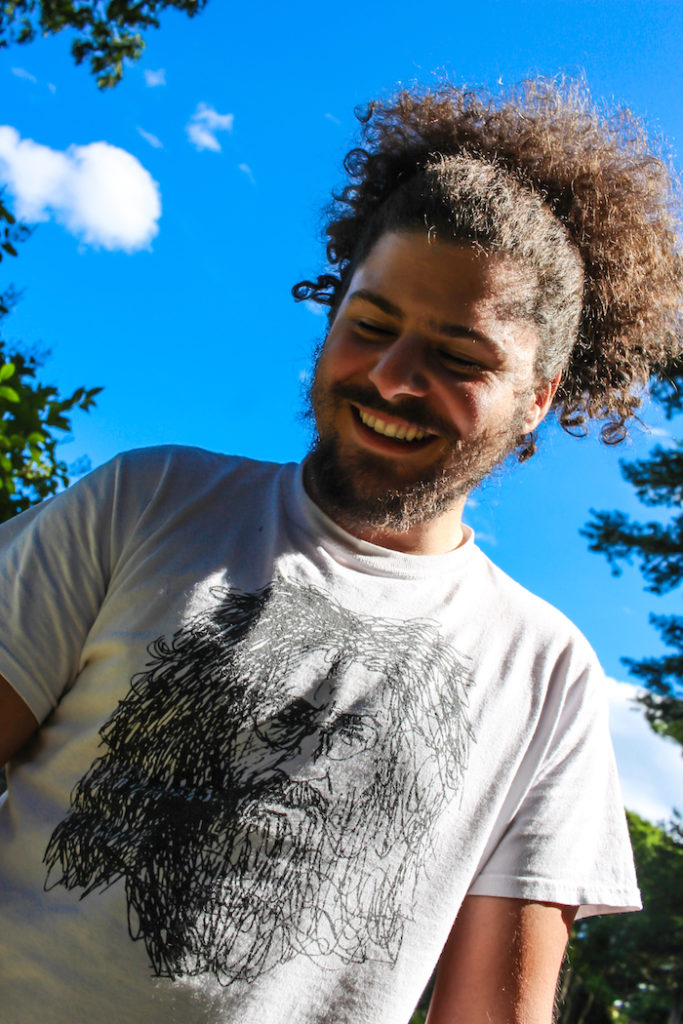