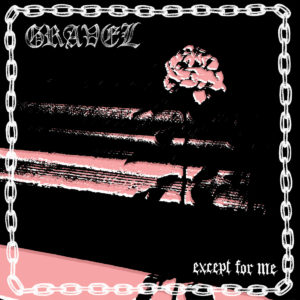 Except For Me was released by four-piece Salem based femme punk band Gravel earlier this month off Let’s Pretend Records. Nine songs in total with no song exceeding two-minutes in duration, Except For Me is a messy and punchy compilation that does not waste any time on the subtleties. On the album, Gravel honestly and unapologetically address themes of body image, mental illness, the demands of American culture, the faults of capitalism, “Mr. Prez” to name a few.

While the album title could be taken as a stereotypical whiny blame on everyone but the “me,” here Gravel subverts those expectations and focuses on the empowerment of the “me” despite the constraints put on them. Except For Me is fast-paced, fueled by frustrations both systemic and personal, and its heavy thematic content translates over to its badass head-banging riffs.

“Control,” one of the more memorable tracks on Except For Me hones in on body image through the lens of consumption—consumption of the body as a commodity and consumption of food to nourish the body. The vocalist sings, “And it’s about control / As I control / what I consume. / It controls me too. / I feed the machine / When I starve myself. / I know that I’m / stronger than that. / But I feel weak. / And everyone is beautiful / except for me.” The feminine image standard controls them even though they recognize its toxicity. That “except for me” chorus evokes the desperation of wanting to look a certain way, yet also not wanting to contribute to “feed[ing] the machine.” The prominent vocals and toned-down, clicky drums in the intro and mounting intensity during the chorus convey that no-way-out anxiety well.

The album’s fifth track, “Metafog,” touches on mental health, how it is often glorified and vastly misunderstood. Aggressive and without pause for breath, the chorus goes, “It’s like a metafog. / Would you just knock it off? / All you care about / is your fucking self.” There is a clear antagonist present that assumes the subject’s mental disposition is just a self-involved act. The term “metafog” itself implies a meta/conceptual fog rather than a tangible fog, suggesting an “it’s all in your head, it’s not real” type nag. The aggravating ringing sound surrounding the song’s barrage of commands likewise evoke a stress that almost can be felt.

Except For Me’s closing number, “Still (Got) Better Things To Do,” combines a lot of issues spoken on in prior songs. But “Still (Got) Better Things To Do is more of a response. “Blue in my body. / Blue in my mind […] I got better things to do / than be shown off. / I got better things to do / than be blown off […] Honey, you were never there / So get the fuck off me.” The final ‘fuck you’ to someone that never cared and never took the time to understand. The message is undeniably clear and puts the power in the hands of the performers. Body image and mental health are not easily managed or controlled, as mentioned in the album’s past songs, but what the subject can control, they will.