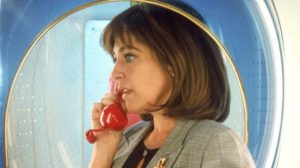 There are two reasons why Women on the Verge of a Nervous Breakdown, the older of the two films screening in tonight’s double feature, gets top billing. First, Almodóvar’s career-making breakout is a true feature, a ninety-minute symphony of ornate design and narrative complication; second, The Human Voice, a short starring Tilda Swinton that premiered in Venice last fall and recently received a theatrical release in the States (full disclosure: it’s now viewable on HBO Max as well), is thematically connected to the earlier work. Both owe their germinal scenario — a woman, a telephone, an absent lover — to the same Jean Cocteau play, after which the short is named.

Each film centers on a woman (just one of them; the feature’s several others, while excellent, are extra) driven at least a little mad, and pretty profoundly, even maniacally, sad, by a highly relatable grief: romantic abandonment. The resulting agita, which turns Carmen Maura’s Pepa into a fire-starting doper of police officers, makes a woe-frozen cipher of the unnamed aggrieved party played by Swinton. Come for the wry but zany comedy (and a baby-faced Antonio Banderas), stay for the wry but icy tragedy (and a stricken-faced, axe-wielding Tilda Swinton, not to mention one excellent dog).

Women on the Verge of a Nervous Breakdown
1988
dir. Pedro Almodóvar
89 min.