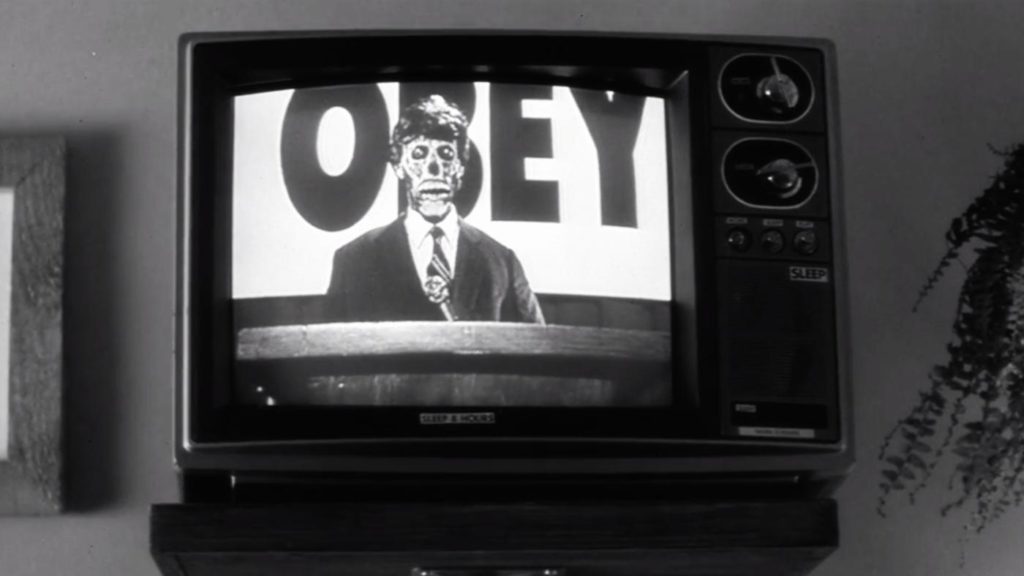 One of the most fabled scenes from John Carpenter’s They Live (1988) comes mid-film, when wayfaring drifter Nada (Roddy Piper) tries to convince blue collar construction worker Frank (Keith David) to try on a pair of sunglasses that reveal an alien invasion that has been hiding in plain sight through the use of brain-warping broadcast systems. Frank, however, believes Nada has gone insane and refuses to try on the sunglasses, resulting in an iconic, seemingly endless five-minute street brawl in which Nada warns that he can “either put on these glasses, or start eating that trash can.”

They Live, which screens on 35mm tonight and tomorrow at the Coolidge as part of its “Invasion” series of alien-themed midnight movies, premiered at the tail-end of the Reagan presidency and served as an on-its-sleeve satire of the crass consumerism that defined the 1980s. The sunglasses, which reveal the subliminal messages within advertising via stark black-and-white orders to OBEY and CONSUME, remains to this day one of the clearest cinematic metaphors for American capitalism. Memeified philosopher Slavoj Zizek famously said the glasses reveal “the dictatorship in democracy,” though he even more famously said that he is “eating from the trash can all the time.”

While They Live is as politically relevant as it ever has been, it’s a very different film in 2021 than it was in 1988. The imagery has been stripped, repurposed, and shared so many times over the decades that it’s in many ways become detached from the film itself, entering the larger pop cultural unconscious. But in the age of the “redpill” and *crack* *ping* conspiracism, one no longer needs to fight anyone to try on the glasses; everyone’s already got a pair — it’s just a question of what brand they’re sporting. On social media, at least, there’s a daily rat race to provide all-encompassing explanations for the state of the world. Despite cries from certain corners that we need to do a better job teaching media literacy, the general public is more astute than ever at breaking down the images they receive — but not always in the direction of truth. Decades of cable news and Twitter and podcasts and algorithms and hot takes and THREADS have trained people how to identify the messages fed to them everyday, but as our boy Zizek reminds us, these messages are inescapably filtered through the lens of *sniff* ideology.

The glasses today can reveal the patriarchal sexism and systemic racism embedded into the fabric of American life. They can be analyses of how Hollywood films reflect systems of economic injustice. But what if you put on the glasses and instead of aliens you saw Jews? What if it was deep state cabals of baby-eating Democrats? Qanon followers, after all, readily find hidden codes in news reports and 8chan shitposts. How do we watch They Live, perhaps the ultimate conspiracy theory sci-fi film, in the era of conspiracy theory? And this isn’t just conjecture — the neo-Nazi resurgence within the past few years jumped at the chance to adopt They Live as a film embracing their anti-Semitic worldviews (prompting left-wing Carpenter to tweet a denial calling the interpretation “slander and a lie”).

But it’s for these reasons that They Live still feels as urgent as it does. Carpenter’s original intent was to produce a populist anti-yuppie satire that drives home the harsh truths about the artifice of consumerist life, and while its ideas may have been misappropriated by bad actors, they have yet to strip the movie of its heart. Reality itself may feel like it’s only become less clear in an era where everyone believes they and they alone have cracked the codes to the way the world is run, but They Live is still out there offering audiences a dose of sanity.

All pseudo-academic proselytizing aside, They Live at the end of the day is also just a damn fun time at the movies. This is, after all, the flick where Rowdy Roddy Piper tells us he’s here to “chew bubblegum and kick ass.” It’s Carpenter at the height of his talents and has won a well-deserved place in the science fiction canon. The opportunity to see it on film should not be missed.

Part of the ongoing series: Invasion!