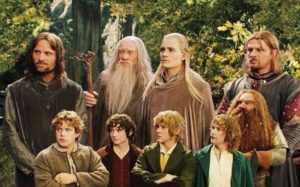 I was not an immediate fan of The Lord of the Rings trilogy. I didn’t grow up reading the books, and my first memory of the films is a tantalizing scene in the caverns of Isengard, cut short by my parents’ censorship (admittedly, I was around eight when this happened). That one scene, which offered viewers a gory glimpse of the delightfully violent Uruk-hai, stuck with me for years to come. It took several more years before I would watch any of the films in their entirety, but just a few minutes into my first viewing of The Fellowship of the Ring, I was hooked.

Peter Jackson delivers some of his best work with The Lord of the Rings. Each film runs over three hours long, yet Jackson manages to provide an entirely immersive experience from The Fellowship of the Ring to the final credits in The Return of the King. Having marathoned the trilogy twice in the ten years since my first full viewing, I feel confident saying these films are worth a watch—even better when it’s offered all in one day. You’ll want to load up on snacks and take advantage of the lengthy traveling montages, because bathroom breaks are a guarantee, even with the 30-60 minute breaks between films.

Our story starts in Middle Earth, more specifically The Shire, during a birthday party for the hero of The Hobbit, good old Bilbo Baggins. Eager to escape the humdrum rhythm of the Shire and enjoy his old age, Bilbo gives his beloved ring to his nephew, the guileless Frodo Baggins. Unbeknownst to the Baggins family, their favorite trinket is actually the One Ring, forged in Mount Doom by the Dark Lord Sauron, and capable of controlling elves, dwarves, and men (or, the vast majority of Middle Earth). Unfortunately for Frodo, Sauron will stop at nothing to get his power back. Thanks to the orchestrations of the affable wizard Gandalf the Grey (played by a magnetic Ian McKellen), Frodo joins a party bound for Mount Doom, where they plan to destroy the One Ring. Unsurprisingly, over the course of three films, the ensemble faces increasingly murky trials, including personal betrayal, a flaming battle with the epic Balrog, and multiple kidnapping attempts. Musically, these films are a rare treat. Howard Shore composed hours of music for the films, creating unique musical phrases for each culture found in Middle Earth. For the hobbits, you’ll hear a fiddle and several other Celtic folk instruments; for scenes set in the dark land of Mordor, you’ll notice a guttural choir and haunting drums that incite the same fear as those thunderous T-rex steps in Jurassic Park. As you take in The Fellowship of the Ring, The Two Towers, and The Return of the King, you’ll hear a massive ensemble consisting of a symphony orchestra, several choirs, and iconic singers such as Annie Lennox, Enya, and Renée Fleming. The overall effect is enchanting, as Peter Jackson applies each leitmotif in ways that can provoke tears, chills, or genuine fear, depending on the mood of the scene.

The guiding point of these films is performances by a brilliant cast. Elijah Wood’s baby blues perfectly match the eager innocence of Frodo in the first film, but are used to equally powerful effects in the darker moments of the saga, particularly during tearful scenes with Sam in The Return of the King. Likewise, Viggo Mortensen plays the aloof but staunchly loyal Aragorn masterfully, making it easy as a viewer to root for his return to the throne. Other highlights include the ethereal Cate Blanchett as Galadriel, the inimitable Christopher Lee as Saruman the White, and Andy Serkis in one of his first major motion capture performances. The cherry on top of these performances, for me, is the incredibly detailed work of Jackson’s makeup and prosthetics artists. It’s easy to get lost examining a sea of orcs and Uruk-hai, particularly in their meatier scenes (pun intended) in The Two Towers. Combined with emotive performances from just about every main cast member, the trilogy leaves few moments devoid of visual interest.

Nearly ten years after the premiere of The Return of the King, Peter Jackson’s The Lord of the Rings series remains an exceptional feat of filmmaking, capable of transporting audiences to an exciting and heart-wrenching plane of existence. Don’t take my word for it, though—get yourself a wristband at Coolidge Corner and take all twelve hours in, but do yourself a favor and skip the extra-large soda.