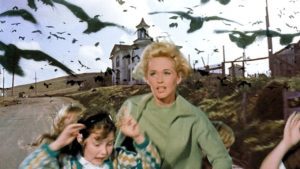 My first memory of Alfred Hitchcock’s The Birds is not my own. As a small child, my sister watched the movie with our dad one evening and felt too scared to sleep alone afterwards. I heard about her terror for years, knowing only the basic details of the story—that, for no apparent reason, flocks of birds began tormenting an otherwise unremarkable community in the US. The randomness of the attacks, and the commonality of the perpetrators, made perfect fodder for a little girl’s overactive imagination. Being three years younger than my sister, I modeled plenty of my childhood anxieties after hers. Even so, I struggled to imagine how birds could invoke such salient fear.

I still managed to avoid The Birds without much effort until a college literature instructor assigned my class to watch and analyze the film. I’ll spare readers the analysis, and focus instead on the compelling weirdness of this suspenseful and silly movie.

Set in the early 1960s, The Birds follows socialite Melanie Daniels as she begins a romance with charming lawyer Mitch Brenner. Mitch is handsome, successful, and close with his family—what’s not to like? Melanie decides to impress him by buying lovebirds as a birthday gift for his little sister Cathy. To deliver the present, she follows Mitch to his hometown of Bodega Bay. 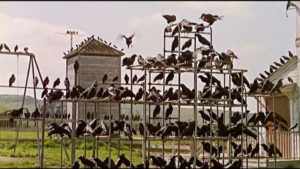 Almost immediately upon arrival, trouble begins brewing. Melanie learns from an ex-girlfriend of Mitch’s that his mother dislikes other women in his life. Deciding to do a discreet gift drop-off, Melanie crosses the bay via boat. Along the way, Mitch spots her; unfortunately, so does a gull with a bone to pick. This is the first bird attack in the movie, but will not be the last.

As Melanie and Mitch get to know each other more deeply, the local birds become increasingly erratic. The chickens on Mitch’s family farm refuse to eat. A thump against the front door reveals a dead seagull. Shit really hits the fan when a few gulls pull up on little Cathy’s birthday party.

Meanwhile, Mitch’s mom does not approve of her son’s new love interest. She doesn’t get the chance to do much sabotaging, though, what with birds attacking people left and right. It’s fairly comical, the scale of destruction that a few flocks of birds can manage. They are undiscerning in their brutality—men, women, and children face equal danger. With no playbook for bird attacks, humanity’s best option is to retreat. But how far can they really go, with aggressors found in every part of the world?

Surprisingly, The Birds is inspired by true events. Scientists now know that the Capitola bird attacks of 1961 were a result of toxic algae blooms. Hitchcock, who lived nearby, took inspiration from the event. With special effects what they are today, I can’t say I’m genuinely frightened by The Birds. Then again, knowing there’s truth behind what happened makes me a little more nervous about living by the sea.